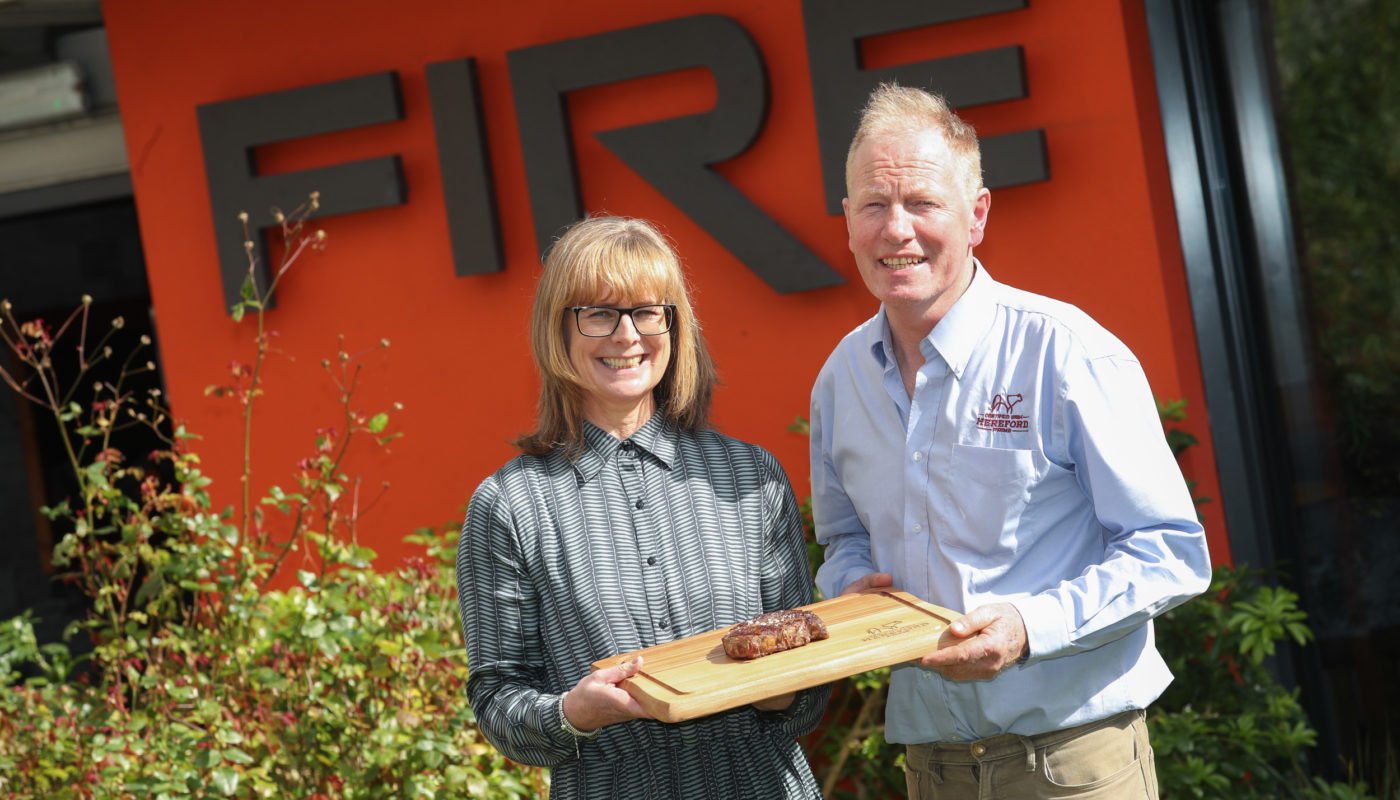 * Herefords rank most consistent for tenderness & flavour in a Meat Technology Ireland study, when compared against 11 other beef breeds *

Beef synonymous with exceptional taste, quality and sustainability, Irish Hereford Prime boasts a timeless story of excellence dating back to 1997. Continuously recognised on a global stage, winning prestigious awards and taking pride of place on Michelin-starred menu, Irish Hereford Prime decided it was time to elevate their brand look & feel to match the world-class quality of their premium beef. It was with great excitement that yesterday Irish Hereford Prime launched their new brand identity at the award-winning FIRE Steakhouse & Bar in Dublin.

The brand’s new central icon uses a single flowing line to illustrate the Hereford animal and reflect the simplicity and purity of the Irish countryside. Straight lines are not often found in nature, with the countryside a tapestry of shapes, characterised by twists and turns rather than straight lines. Fresh and modern, yet in step with its rich heritage, the Irish Hereford Prime mark is a clear statement of quality, whether it is seen on a menu or supermarket shelf. Farmer led and member owned, Irish Hereford Prime is Europe’s largest and oldest Hereford producer group.

At this launch event, members of the Irish Hereford Prime team explained why they started the producer group and how they guide their members to produce the best beef, to the highest standard, driving demand and creating a reputation for care, consistency and exceptional quality. It was then over to FIRE Steakhouse & Bar Culinary Director, Richie Wilson to awaken tastebuds with a guided beef tasting. During this exclusive tasting experience, guests were treated to six different cuts and cooks of World Steak Challenge Gold Medal winning Irish Hereford Prime beef, including a bespoke dry-aged Fillet steak. From behind the grill Richie took guests through the journey from farm to fork, and showcased what gives this premium beef its unique mouth-watering flavour profile.

So why do over 5,000 farmers across Ireland choose this docile breed, and what makes this beef so tasty? Irish Hereford Prime animals are powered by grass, which means this premium beef is high in Omega 3 fatty acids, vitamins E & B, calcium, magnesium and potassium. So, not only does Irish Hereford Prime taste amazing, it is also packed full of nutrients. It’s superb tenderness and taste is a direct result of the Hereford animals’ stress-free lives led in our lush Irish fields of green, and also the docile nature of this breed. The secret to its award-winning flavour and melt-in-the mouth texture lies in the finely-grained fat that creates its characteristic marbling.

Speaking with passion and pride in relation to their rebrand and Meat Technology Ireland study Niall O’Mahony, Chair of Irish Hereford Prime commented, ‘Rich history, strong provenance, superior taste, environmental credentials – at Irish Hereford Prime, there really is so much to savour. Everyday each and every member displays an enormous commitment to the Hereford breed, and to the values and missions that our producer group are founded upon. We wished to show our commitment to our community of breeders by investing in the brand and ensuring it is consistent with the exceptional quality of our meat produced. Irish Hereford Prime is not only featured on top Irish menus, but it is sought after across Europe. We wish to ensure that the story of these animals and farmers are told, as they so justly deserve.

‘We were over the moon at the findings of the Meat Technology Ireland study whichranked Herefords  most consistent for tenderness & flavour, when compared against 11 other beef breeds. It was wonderful to get this independent acknowledgment of something which we pride our animals on. We are so excited for consumers to see more and more from Irish Hereford Prime as we continue to grow and position Irish beef among the best in the world.’

Recently climate action and beef farming are making headlines, with those that would argue the negatives of this industry.  However, at Irish Hereford Prime farmers are unified in their focus on both quality and sustainability. Members have a deep sense of responsibility to the environment, the community and the future. While many organisations talk about sustainability, Irish Hereford Prime takes action.

Across Ireland, Irish Hereford Prime famers are going above and beyond rearing Herefords to carrying out additional activity on their farms which will benefit the environment. These activities include: reducing the use of chemical pesticides, planting forestry and wildflower meadows, to creating safe havens for wildlife such as birds, bees and bats. As a breed Herefords boast a reduced carbon footprint, when compared to other cattle, due to their early maturation. By famers increasing their time spent grazing outdoors, this further reduces Herefords’ carbon emissions.

Provenance and standards when it comes to food are essential. Certified Irish Hereford Prime is a true badge of quality. It gives producers, chefs and consumers complete confidence that the beef is genuine and can be traced back to the field where it was reared.  Irish Hereford Prime adheres to a lengthy and strict set of certification regulations, with members also participating in the Bord Bia Sustainability Beef and Lamb Assurance Scheme. Irish Hereford Prime’s strict qualifying criteria for their animals, leads to a very suitable carcase, and the early maturing ability of Herefords ensure cuts of a consistent size and quality, so chefs can be assured that every plate looks and tastes as good as the next.

Speaking from behind the grill on what he looks for from his meat, Richie Wilson, Culinary Director at FIRE Steakhouse & Bar commented, ‘We’ve been serving Certified Irish Hereford Prime for over 10 years, something we’re really, really proud of. I’ve been to the farms and seen how the Hereford animals are cared for, how they’re bred and how they’re reared. Knowing all of this gives me so much confidence walking out to talk to a table of diners. It’s amazing to be able to tell guests where exactly the beef has come from, and how natural and well cared for the product is. Pre-covid, on a busy night we could serve up to 500 guests, so we need to be 100% confident that our beef is of the best possible quality. It has to be perfect every single time. Irish Hereford Prime really is a step above everything else.’

Irish Hereford Prime is available as part of the SuperValu Signature Tastes range.