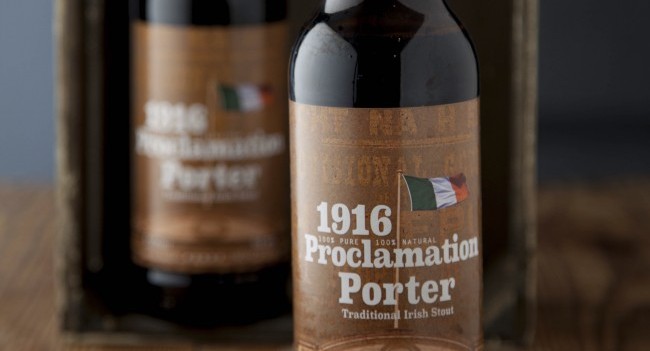 On Thursday 27 April 1916, the Enniscorthy brigade of the Irish Volunteers proclaimed the Republic to the good people of Wexford from the steps of the Athenaeum theatre, and for one week a tricolour flew high over the roofs of Enniscorthy. “Ireland through us, summons her children to her flag and strikes for her freedom”

To commemorate this important moment in our history, the Arthurstown Brewing Company, co-founded by top chef Kevin Dundon, is launching the 1916 Proclamation Porter.

Speaking about the new beer, Kevin Dundon said, “This beer is our way of celebrating those brave Irish men and women who fought for our Independence, especially those in the Athenaeum theatre in Enniscorthy.”

The Proclamation Porter is described by the Arthurstown as “an old-school Irish stout, such as those brave men and women of Wexford would have known, brewed from our own native grains, grown in the very soil they pledged to liberate, with Chocolate and Dark Crystal malts for a velvety finish, with notes of chocolate and coffee.”

This is Arthurstown Brewing Company’s fifth beer since first appearing on the market in September 2015 and Brew Master Kieran Bird, along with Kevin Dundon, are constantly developing new and exciting recipes.

Arthurstown’s Proclamation Porter is now available in SuperValu and Centra nationwide as well as a growing number of independent off licenses and pubs. The commemorative beer is available in 500ml bottles and on draught.