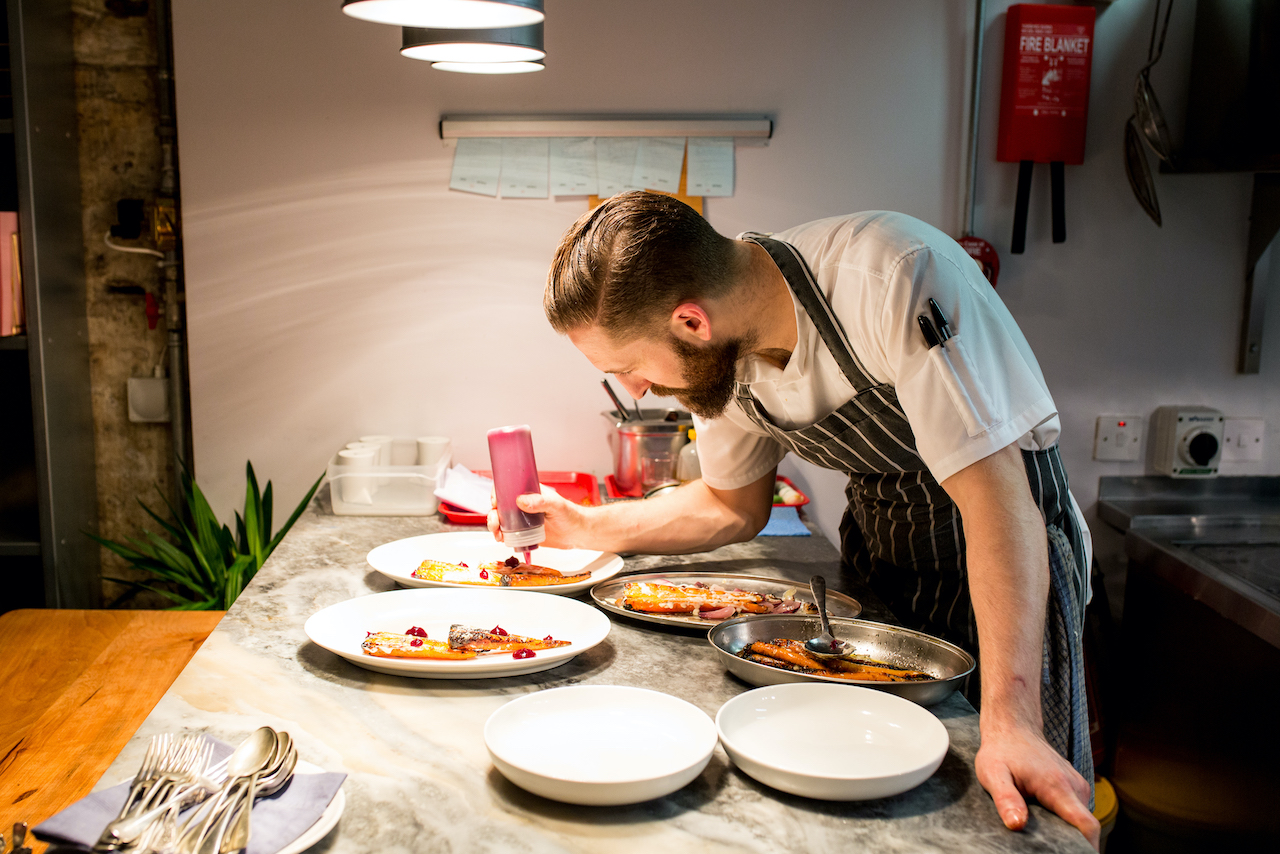 How cooking can be so simple yet deliver so much is surely one of life’s greatest mysteries, especially if you live in the kitchen for more of the day than most people. Such conundrums come easy to Greystones, Co Wicklow chef, Keelan Higgs, a culinary creator that committed restaurant-goers in Dublin will know from his previous stints at Locks, Luna, and The Greenhouse.

Jumping from kitchen to kitchen is behind him now – Higgs has been overseeing the Michelin star Variety Jones, Thomas Street, Dublin for over two years, and while the past 15 months haven’t been kind to anyone that runs a restaurant you get a firm sense that Higgs and his tight-knit compadres (which include close relatives) have the suss and smarts to sail through those choppy Covid seas to get to dry, no-pandemic land. The smarts, however, haven’t just landed on his shoulders out of nowhere.

“My dad would have been involved in restaurants when I was a kid,” Higgs outlines, “so I was always around the environment. I always had an interest, too, and veered towards it. Of course, I was advised not to be a chef, what with the hours involved and the usual gripe about how your social life would be out the window. But when you’re told not to do something there’s the tendency to do it, for better or for worse.”

A dedicated work ethic kicked in from when he was a teenager. His first job, he recalls, was at the age of 13, when he worked at the local golf club “washing dishes, doing starters and desserts for various functions.” On finishing school (with, he admits, “an average Leaving Cert” that didn’t provide enough points for an exploratory try at Psychology), he was at what he describes as “a loose end.” A career in cooking, however, was always on the radar, and after working at a local restaurant “until I figured out what to do”, he decided to enrol in Culinary Arts at Dublin Institute of Technology (DIT).

It wasn’t all smooth running during this time, he says. A restaurant he worked in was owned by someone that “didn’t really care about the place, he was just squeezing for every penny he could get until life caught up with him. It came to a point where it was the only place I walked out of. Two days after I left the place closed down, so my assumptions were correct.” The experience of being at the receiving end of such operational ineptitude (deliberate or otherwise) hit Higgs like a tattooist’s needle in the arm – it gave him an absolute sense of how not to do things.

“And of how to do things the way I wanted,” he adds. “That has been a recurring theme in my career. I’ve learnt many lessons along the way and worked in many different places where I have picked up valuable information, but a good deal of it is how I would do things differently. With respect to that particular restaurant experience, it was lesson number one.”

As they are wont to do, further lessons arrived. Higgs remember his years at DIT as being not exactly filled with the joys of typical student revelry. He was seriously minded, at very least, a young man with the fully focused mindset of progressing his career and of not caring if people around him liked the way he went about it. “I suppose I was an angrier man than I am now,” he discloses, an admission that is as honest as you can get. “My attitude back then was that I wasn’t there to make friends, or to be part of the college life – I was there to get a degree in order to advance my career. That approach wasn’t perceived well by some people but, you know, it was what it was. On reflection, of course, I could have taken a step back from that attitude.”

After his first year at DIT, Higgs was placed in the kitchens of Patrick Gilbaud’s. One word: wow. Even though he would have thought at the time that he knew how to cook, working at Gilbaud’s taught him that there are levels to reach. Gilbauds, he says, is one of the very highest levels you can get to. He admits his short stint there – no longer than four months – “galvanised me in terms of where I wanted to be at and what I wanted to strive for. It was so organised, so regimented, with the focus on quality and getting it right. That’s what everyone was striving for.”

That sounds like a pivotal experience, I suggest. It was, he assures me. It showed him, he continues, that certain standards need to be maintained in order to produce quality food and experiences. “I have the utmost respect for what Gilbaud’s do and how they do it. It’s an institution and whoever comes through there, whether or not they have stuck it out for whatever length of time, they leave with a higher standard of everything. I don’t think I realised that immediately after I’d been there. It was only after I started working elsewhere that I realised it ingrained a standard in me, and that’s something I have taken with me right through my career.”

This brings us back to Variety Jones. The perception of Michelin star restaurants has been brilliantly upended here. It has what you might term an anti-marketing aesthetic: an audacious website, no obvious signage above or on its doors, an extremely succinct (mostly sharing) menu, a vibe that is more Shoreditch eatery than The Shelbourne’s Saddle Room. It is above all a smart (and very natural) reversal of orthodox.

“In the past ten to fifteen years,” says Higgs, “I’ve worked in several fine dining and Michelin-star restaurants. It’s no slight whatsoever to them, but my personal background isn’t rich or privileged, but rather one of good food, of this being an important thing, and having a strong sense of communality – sitting around the table and digging in together. For me, the restaurant is a case of presenting top-end food without having the formality and, for some, the intimidating environment that people can sense, especially those that aren’t used to eating out all of the time. Variety Jones is similar to the sensibility we would have had at home, a place where you can break bread together and not feel shy about having a good time. That’s why many of our dishes are for sharing. It’s a good way to break down the barriers between people – they quickly start to relax and to feel at home.”

At home, did Higgs just say? Right now, that’s where the restaurant action is and that’s why Variety Jones’ deep dive into home delivery kits has been such a roaring success. Until they arrived, he discloses, it was just a matter of keeping sane and active. As for re-opening, Higgs isn’t holding his breath. “You’re just waiting for the word, aren’t you?”