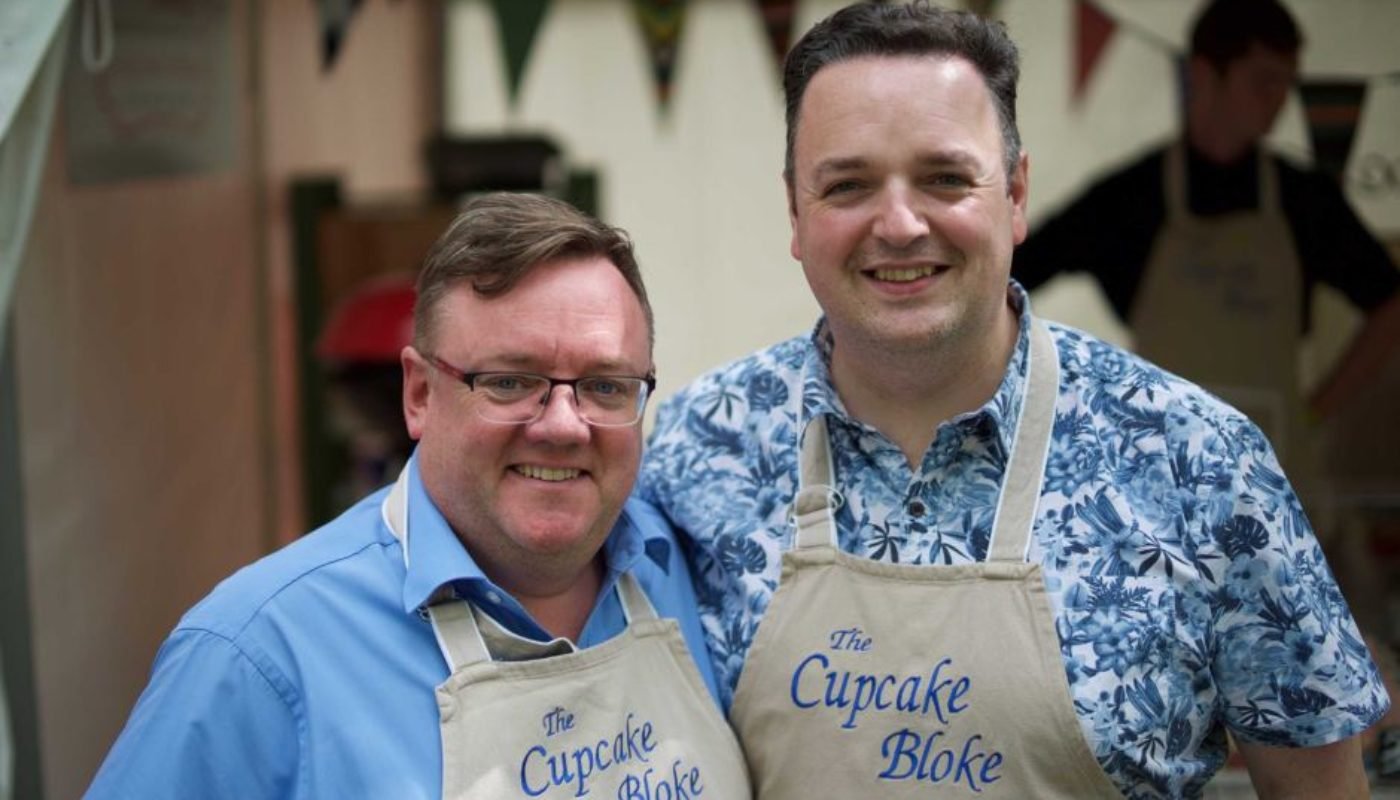 Journeys in Taste Interview with Graham Herterich – The Cupcake Bloke

It’s a truism as much as cliché to say that good things come to those who wait, but when it comes to Graham Herterich and his partner Daithi Kelleher, that their small-acorn-big-oak ideas of almost nine years ago have (2020 notwithstanding) settled into a very nice place. Back in 2012, having been made redundant from their respective jobs, Graham and Daithi put their heads together and came up with (as Blackadder’s Baldrick would say) a cunning plan. To bring their plan to fruition, it helped that Graham had previously been employed by a (now defunct) coffee chain business as the product developer of its bakery service and production manager for its savoury produce.

But how exactly did he get to be the King of Cakes and the Supreme Leader of Scones? The clue, he answers, is in the surname. You may not be aware of it, but Graham Herterich is part of what was once one of the best-known butcher families in Ireland. “We used to have butchers shops all around Ireland – places such as Dublin, Naas, Newbridge, Kildare, Athy, Waterford, Wexford – but they are now only in Galway and Longford. My grandfather’s brothers all set up butcher shops, and their sons and some cousins continued the business.”

The business of food, then, has been in Graham’s life from the year dot. He says that when he was in his transition year at secondary school, he decided that he wanted to get a placement in a restaurant for work experience. “From the first time I set foot in the kitchen I absolutely loved it. I had a great mentor during my first couple of years working at Tonlegee House, Athy – my mentor was Mark Molly, who was the chef there. I admired the man so much and loved working in the kitchen with him. It was a great start to a career.”

As teenagers, we all are formed by our experiences. I ask Graham what grounding principles learned from his early mentor did he subsequently take into his career? “I hadn’t been at Tonlegee House for very long,” he recalls. “On one occasion I had to make something with olives, but I said to him I didn’t like olives. Mark said something along the lines of never say you don’t like anything about a particular food because you will probably find something about it that you will like. The next week he came into the kitchen with about ten different types of olives that he had sourced for me to try. In the following weeks, he would bring in different olives and, of course, I came to love them! So the lesson was to keep trying, never be afraid of experimenting with food or tasting new foods.”

Lesson duly learned and absorbed, by the mid-‘90s Graham decided not to enter the family business but rather to train as a chef at the Institute of Technology Waterford. There was an acute business method in his choice: by this point, because of the emergence of supermarkets, family butcher shops were closing down all over the country. People of a certain age might not remember, advises Graham, but back in the day there were butcher shops that specialised in different meats lamb, pork, beef. “When I was growing up in Athy,” he says, “I can remember about ten butcher shops in the town, whereas now there’s one. So I saw the pressure that my dad was under.” If, he says, he was the age he was back then right here and right now, he would love to be doing it “because butcher’s shops for quite some time are so much more than they used to be. They’re craft shops, and that’s what we’ve done with our shop in Rialto – we have gone out of the way to source Irish artisanal products as well as make them. It should be said that some supermarkets have amazing butcher sections, but dad closed the shop and that was the end of that from a career point of view. By then, however, I had decided I wanted to be a chef.”

We know what you want to know, and to what question you really want the answer: cupcakes, Graham, why cupcakes? When he was working with the coffee shop chain, he had started up their subsidiary cupcake business. Being made redundant was, it transpired, a blessing in disguise because Graham knew there was a demand for bakery products, not least cupcakes.

“I also knew from a distribution aspect that there was a need for small, independent coffee shops to be able to get products. Not in major numbers, but about a dozen cupcakes, a dozen muffins, scones, and so on, fresh every day rather than having to order a load of muffins from this company or a load of scones from that company.” In essence, he relates, that’s what the Cupcake Bloke business was set up as – a small bakery to supply small coffee shops with small quantities of fresh goods every day. “That was the goal and I knew there was a market for it. At the time I didn’t know anyone else that was doing something similar, but I knew it could work because I was doing it for a chain of six coffee shops through a central kitchen. I just knew a bakery could find new customers and would work as a standalone business – and thankfully it did.”

Fast forward to 2021. Society’s gloomier days are being gradually replaced by brighter, bigger and better ones. For Graham, pragmatism and positivity run in parallel. “Last year wasn’t great, of course, what with our wholesale side ceasing trading for the best part of six months and the corporate side of things ceased, too. I’m one of these people that always look for the positives, and for me what we’ve all been going through was being able to rethink what products we carried in our shop.”

Along with Cupcake Bloke’s array of treats, Graham wanted to carry selected Irish-produced goods. With his product development hat on, he spent the best part of 2020 sourcing “amazing Irish products, building up relationships, buying directly. I just loved spending time doing that, time that I never had before because I was too busy. So, yes, 2020 was a tough year but in some ways it was also good. I’m sensing now the wholesale side of things is a little bit busier, corporate not so much but that will take time. It’s great to feel the buzz in the air, people becoming more confident, getting out and about, and older people now happier to have a chat in the shop rather than running in, getting a loaf of bread and running out again.”

As lockdown restrictions subside, the continued success of the Cupcake Bloke business rises. June sees the launch of its next click and collect offering, while a minor but important refit of the shop in Rialto will, reveals Graham, “give us more space and more produce from more food producers.”

Onwards and upwards? Here today, scone tomorrow? Why ever not.