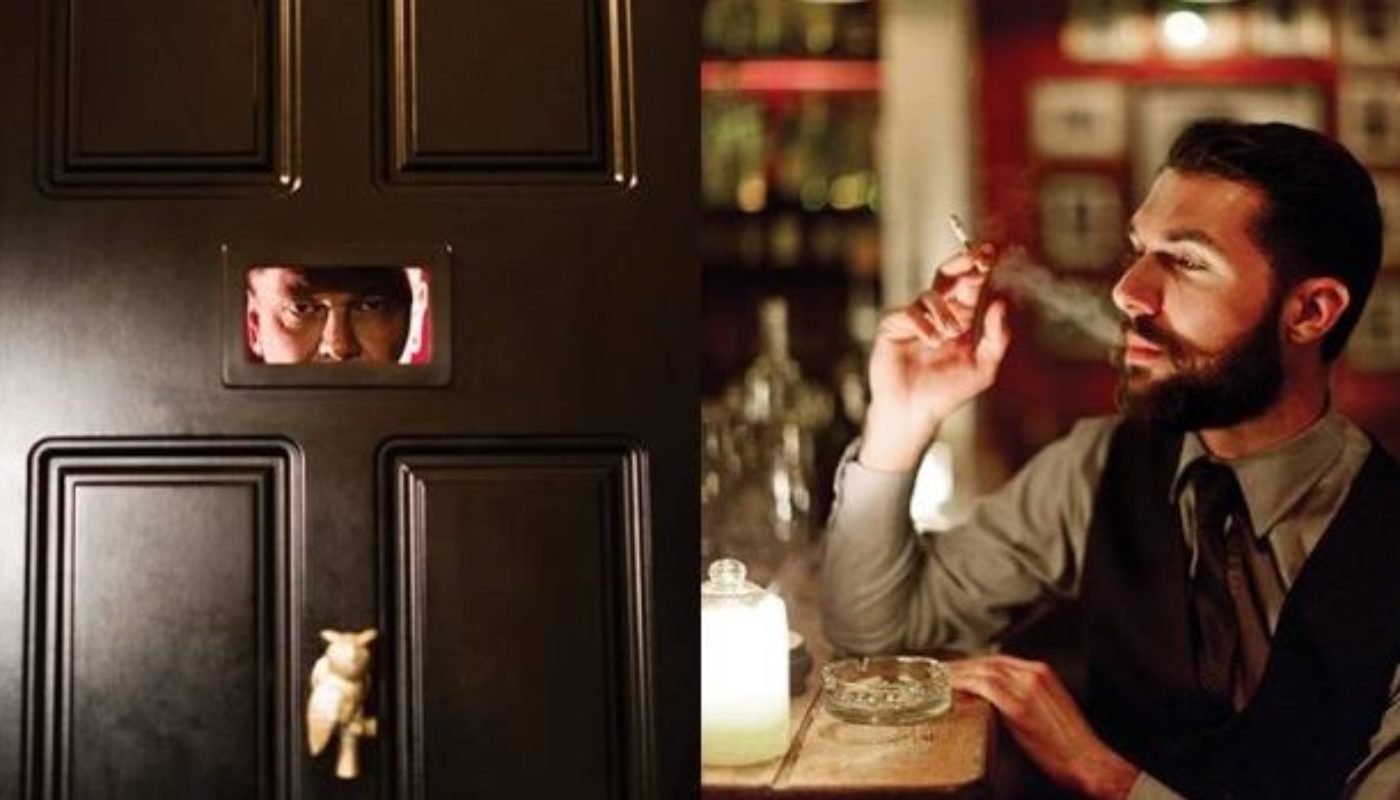 Knock knock. Who’s there? Only Rome’s most exclusive bar, beckoning you in with the promise of a night to remember. Be warned however, you may not make the cut. Unless you have taken to the time to source the ever-changing password, requested on a door anyone not in the know would miss, you won’t be spending your evening in The Jerry Thomas Speakeasy.

On a recent trip to Rome, I had the privilege of visiting the homage to Thomas, described as a bar-tending legend, a 19th Century mixologist before alcoholic alchemy was the art form it is today. I will admit, I stumbled upon the speakeasy not because of any Italian street cred of my own, but that of our own Roman guide Simone Corporale – Peroni Nastro Azzura’s Master of Taste. With a world-renowned mixologist in tow, we were ushered in with his utterance of the password, which is available to mere mortals via the Speakeasy’s website and usually relates to tidbits from Thomas’ tome – A Bartenders Guide: How to Mix Drinks.

If you manage to make it past the bearded hipster Roman bouncers, consider yourself in for a treat. Decor-wise, Moulin Rouge meets Roman passion here, red walls dotted with sultry portraits in the style of Jack Dawson’s French girls and not a lamp in sight – candlelight and dull lanterns only. I learned the hard way that interrupting this cosy darkness with a camera flash is forbidden – this place isn’t for your devoted social media-ite and for once, we put our phones aside and actually soak up the present. No mean feat!

This is one of the House Rules, stated alongside caveats such as “Don’t invite your friends because they’re not getting in” and “No sleeping on the tables or talk of politics and religion” – the Jerry Thomas Speakeasy isn’t made for debating the state of the nation on mismatched chairs and make shift couches. While the discreet corners and dim lighting would be ideal for a couples’ canoodle, the rules further state that “The bathroom is made to go one at a time … we understand each other!”

Everything in the Jerry Thomas is served with a wink and a cheeky smile by moustached mixologists, including the very officious looking membership card we are all required to fill out – cementing the experience as one of a kind and exclusive down to the very last detail. While Jerry Thomas was conceived as a recreation of the 1920’s Speakeasy, it is hard to imagine its atmosphere being recreated anywhere else – even before you have taken your first sip.

The menu is closer to a catalogue of cocktail creations, each one more unique than the last and is divided into sections like Agave, the preserve of Mescal and Tequila tipples, the Gin Collection and Scotch – Bourbon – Rye. Each offering is described in its own paragraph, detailing the rare components making up each potion – a dash of Tequila infused with umami extract here, a shot of Baiju there. Many of the bitters (mustard bitters, anyone?) are made in-house, cementing the fact that mixologists here are as meticulous in their creation as chefs turning out haute cuisine.

As an Old Fashioned fiend I pushed myself to sample something a little out of the ordinary, when in Rome. The Shortbreak was itself a departure from my usual style of concoction, which drew me in with Johnnie Walker Black and Talisker Storm. Shaken vigorously with Kümmel, a sweet clear digestive liqueur flavoured with caraway seeds, cumin, fennel and other herbs, this was clearly a showcase of skilled craftsmen creating original potions.

Sea fennel syrup was perhaps a bridge too far as this was a bracing, cheek quivering aniseed-spiked elixir. Of the 1,600 bottles of spirits stocked in this treasure trove of infusions, Kummel wasn’t the closest to my taste, but this was certainly an innovative and memorable libation indeed – I had never tasted anything like it and probably never will again. Just as the space itself may not appeal to everyone, this cocktail was love/hate, but one of my drinking companions was entirely taken by it.

Improved Aviation, one of the Jerry Thomas’ signature cocktails, was a must according to Simone and a round was swiftly ordered. An icy goblet of gin, lavender syrup, lemon juice, violet liqueur and rose bitters, Improved Aviation proved to be a high point. Even for a non-Gin lover like myself, floral notes and a lavender undertone did anything but put me to sleep – you could easily sit here all night happily rambling, goblet in hand. A cigarette in the other, should you wish, wouldn’t fall foul of the ‘smoke in moderation’ rule.

At Jerry Thomas bartenders are bearded to the hilt and dressed from ear to ear in the era of the Speakeasy – the hidden bars that started to appear just after the advent of the showman himself and became spread across the US during the Prohibition of the 1920s.

There are a few light-hearted prohibitions here but overall the Jerry Thomas Speakeasy is a quirky and unique place to relax, imbibe concoctions masterfully created and soak up the laid back vibe of one of the World’s Top 50 Best Bars, number 33 to be precise. There is one major prohibition you best take heed of however. “Don’t ask for vodka because we don’t sell it” – Cosmo lovers, knock on someone else’s door.