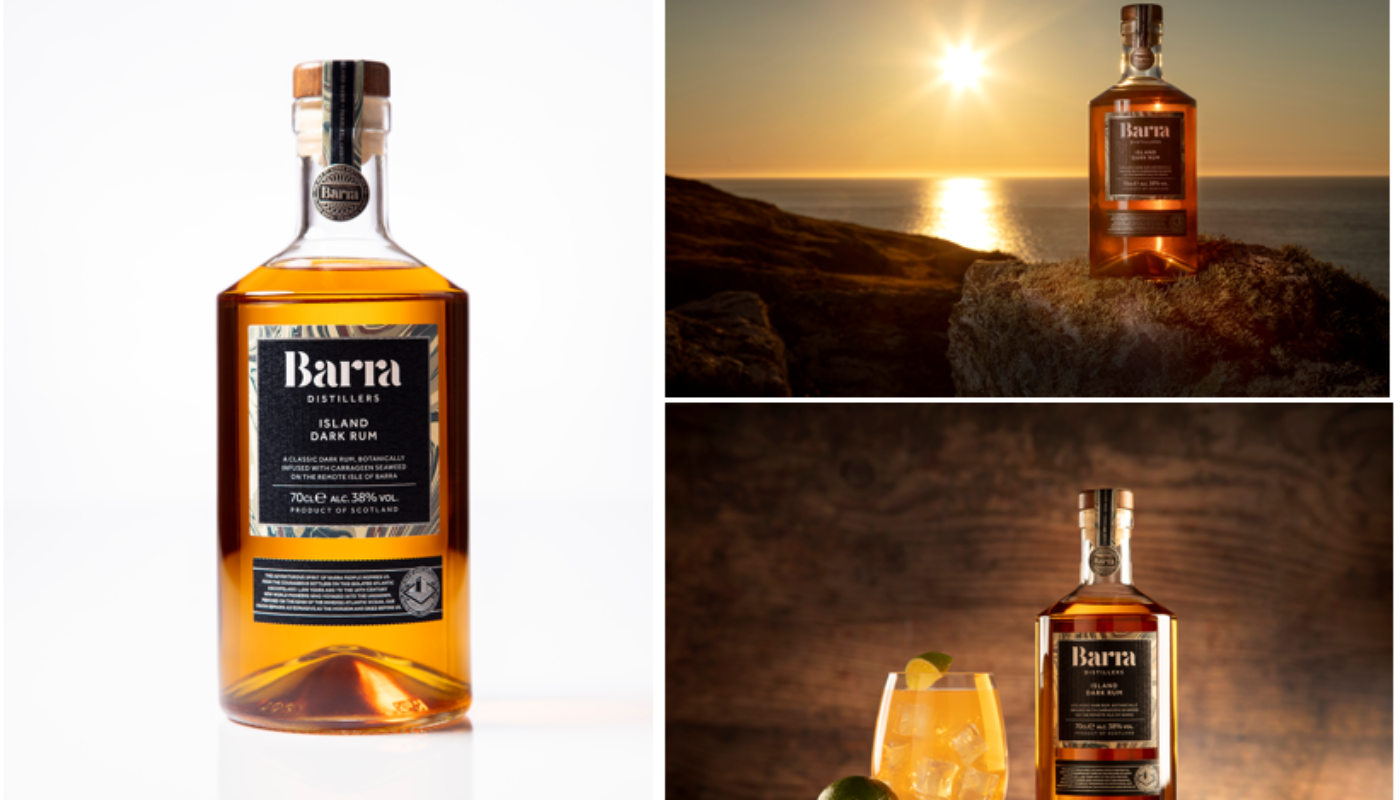 The connection between Isle of Barra Distillers’ island home and the expansive ocean that surrounds,  inspired the launch of the new Island Dark Rum. Strong, bold and rustic, much like the rocky east  coastline, whilst the finish is as smooth as the fine golden sands found on the West side, together fully representing the roots and extraordinary surroundings of the Isle of Barra.

Isle of Barra Distillers ensure the Island Dark Rum is rich and full of island maritime notes and flavour by utilising the key botanical, carrageen seaweed, which the brand is famed for, hand-harvested from  the shores of Barra. The carrageen is infused alongside coconut, cardamon, cloves, lemon and orange  peel. On the nose, coconut and clove present first, shortly followed by a crisp maritime freshness. To  taste, coconut and brown sugar flavour with a clean and dry mouth feel, while the finish provides the complex warmth of cardamom.

“While our story progresses, our family distillery continually grows. Naturally, as does our product  range of fine spirits. Filled with interest and ambition, we understand that perfection takes time.  Releasing a Rum from the Isle of Barra has always been an interest and a goal of ours and now the  time is right for us to explore this spirit” – Michael and Katie Morrison, Founders.

• Fill a low-ball glass with ice

• Double strain into the glass of ginger beer

• Garnish with a wedge of lime

Isle of Barra Distillers’ commitment to sustainability is at the forefront of everything they do; from  being mindful of the sustainable way they forage, to how they create, bottle, package and ship their spirits. The distillery’s definition of sustainability is meeting their own needs, without compromising the ability of future generations to meet theirs.

Creating employment and making a difference is a key part of their vision. There are very limited  opportunities for employment on Barra and in many cases, locals need to have two or maybe three jobs to make enough money as most jobs on the island are low paid. Isle of Barra Distillers are bucking  the trend as employers, paying each employee a fair and honest wage and that is the structure they  have built and will continue to build the company on.

Childhood sweethearts Michael and Katie Morrison grew up and met on the Isle of Barra. Michael was  a born entrepreneur, starting with 14 creels to catch shellfish off the coast of Barra. At only 11 years  old, he would sell his catch to local restaurants and built a successful business as a young teenager. This  sparked the entrepreneur spirit in him, “I learned early that you needed to invest to push on and I did  this and through the next few years my weekly wage was as high as £120 and that was pretty high for  someone that was 13/14 years old,” stated Michael. “From then I knew I wanted to be my own boss and  that is what the island taught me from an early age, use your initiative and be creative.”

Michael and Katie then moved to the bustling city of Glasgow as teenagers to study and started their  first business together. Although it was a success, they felt the call back to the island, where they got  married and started a family, as well as pursued their dream of creating great opportunities for  employment on an island facing decline from generations moving to the mainland and beyond in search  of better employments and opportunities.

They felt there was an opportunity to move first into the world of gin, with the dream of ultimately  building a single malt whisky distillery on the island. So, in the summer of 2017, after many different  batches, forages, dives, experiments, and tastings, they felt they finally had created the perfect tasting  gin and released Barra Atlantic Gin on the 14th of August. The Isle of Barra Distillery website went  live at 20.32 o’clock and their first website crashed. “We sold over 1k bottles within the first 24 hours.  It was a great start”, said co-founder Katie Morrison.

Click Here To Read More Of Our Drinks Articles