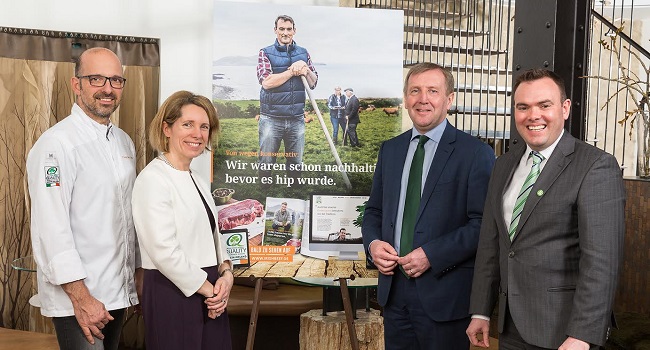 Bord Bia plans to showcase Irish food and drink globally as the world prepares for St. Patrick’s Day. The organisation’s 13 overseas offices will promote Irish products with a series of business development and consumer initiatives including over 65 marketing activities aimed at consumers, retailers, trade and foodservice operators.

Irish food and drink is currently enjoyed in 180 markets around the world and exports reached over €11 billion for the first time in 2016.

“St. Patrick’s Day provides the Irish food and drink industry and Bord Bia with a real business opportunity to highlight our export credentials on a scale unmatched by the national day of any other country”, said Tara McCarthy, Bord Bia’s Chief Executive, who also pointed out how “now more than ever, in the context of Brexit, we are capitalising on this opportunity to deliver key business development meetings, events and campaigns that allow us engage with new and existing customers.” The Business of Irish Beef to the Fore in Europe

Irish beef is one of the main products for Bord Bia. The Paddy’s Day celebration will see an intensification of promotional activity across the German, French, UK and Dutch markets targeting major retailers, shoppers and media.

In Germany, a campaign of nearly €1 million was launched this week to promote Irish beef. The Minister for Agriculture, Food and the Marine, Michael Creed, was on hand to launch the timely campaign. As part of the Minister’s visit to Germany, a week-long programme of trade activity is underway which included a meeting with foodservice operator, Niggemann Food Frischemarkt, a substantial importer of Irish beef, lamb and dairy, to discuss upcoming promotions of Irish meat.

In the UK, Ireland’s largest export market, a comprehensive digital campaign for Irish beef, Beef Encounters, was launched and is expected to reach 3 million people.

In France, Bord Bia is coordinating an Irish beef promotion across some 140 Monoprix stores, a chain that purchases €4 million worth of Irish beef. Advertising material for Irish beef will also be present at other popular French retailers.

Minister of State at the Department of Agriculture, Food and the Marine, Andrew Doyle supported Bord Bia’s efforts in the Netherlands, Ireland’s third largest market for beef. Meanwhile in southern Europe, Bord Bia’s office in Spain is running an Irish beef promotion with the country’s second biggest retail chain, Alcampo, while sampling and advertising has been arranged in Milan with retailer, Carrefour, during the St. Patrick’s Day period.

Promotional activity also includes other markets such as Japan, Sweden, Moscow, Korea, china, Poland and the US.