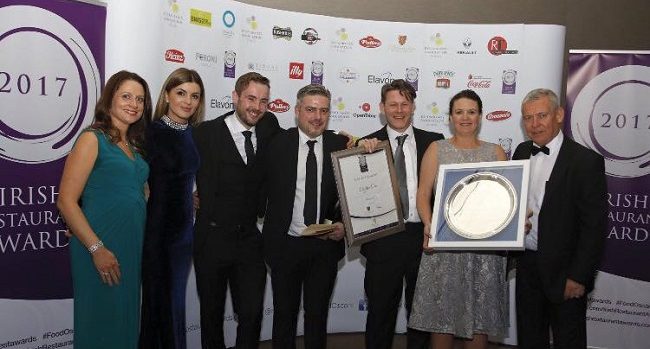 It’s the most anticipated night in the restaurant industry’s social calendar, and this year’s glitzy RAI Irish Restaurant Awards 2017 did not disappoint – with some surprises thrown into the mix.

Held at the Clayton Hotel in Dublin on Monday night the biggest awards of the night went to Ireland’s only female Michelin starred chef, Danni Barry, who was named Best Chef, and Ross Lewis’s Chapter One, which was named Best Restaurant at the awards presented by Sile Seoige and Barry Murphy.

On winning the top gong Chapter One commented on Twitter this morning: “Couldn’t be prouder of the team. Great news to wake up to: Best Restaurant in Ireland!”

Head chef at Deanes Eipic in Belfast, Danni Barry said: “Thanks for all the kind words and good wishes! Incredibly humbled & delighted! So grateful to my Deanes EIPIC team who make it all happen.” Other major awards that will be settling in Belfast this year are Best Restaurant Manager, won by OX co-owner Alain Kerloc’h, Best Wine Experience, also won by OX, and Best Casual Dining, won by The Muddlers Club.

The All-Ireland Best World Cuisine title at the Irish Restaurant Awards went to Wa Café, an unassuming but much-loved Japanese eatery in Galway.

Head chef of the restaurant, Ciaran Sweeney, was also named Best Chef in Dublin, among the regional award winners which were also announced on the night. 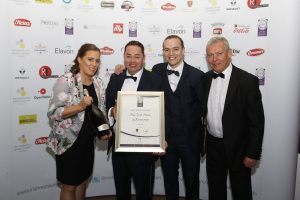 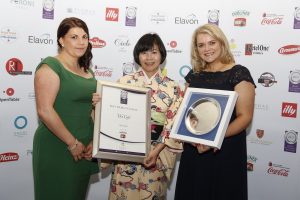 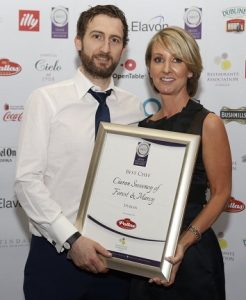 Other regional winners included Neven Maguire’s MacNean House and Restaurant in Cavan which scooped the Best Restaurant in Ulster award, and 777 Mexican restaurant which won Best World Cuisine in Dublin.

Looking south, the Local Food Hero 2017 title was awarded to Michael Kelly, founder of the Grow It Yourself movement, which is based at GROW headquarters in Waterford.

The awards hosted by The Restaurants Association of Ireland courted some controversy in the past week when it revealed the six chefs who were to prepare the banquet dinner for over 900 people, none of whom were female.

All chefs were chosen as they were all previous winners of the regional titles, with Finbarr Higgins acting as a representative for The Clayton Hotel.

Followers of the Athrú, the movement aimed at empowering women in the culinary arts in Ireland, first flagged the controversial selection on social media last week. While a protest had been planned to take place at the awards ceremony, it was averted.

Athrú co-founder Hilary O’Hagan Brennan has confirmed that the group will now meet with representatives of the RAI to discuss the issue.