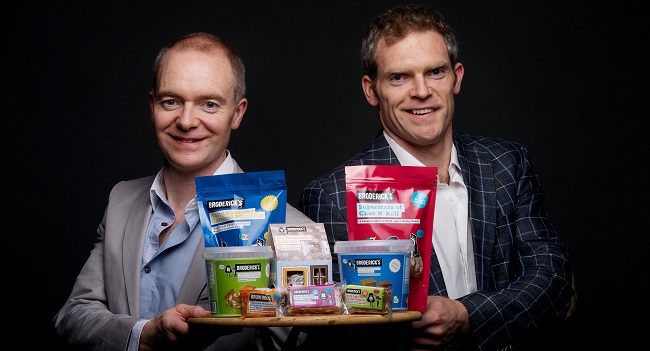 Anyone with a sweet tooth in Ireland will undoubtedly be aware of Broderick’s – the cartooned range of grab and go treats and confectionery that has made household names of the Broderick brothers, Barry and Bernard. Broderick’s bars and cakes have become so popular since their launch in 2010 they are stocked in Ireland’s most prominent supermarkets and several cafés and coffee shops.

Thanks to a significant deal with Aer Lingus, they are also taking over the skies, supplying Virgin Atlantic, Delta Airlines, Emirates, Ryanair and CityJet with travel sized versions of their homemade treats. This has helped the brothers expand their distribution worldwide and their products are now available in 25 countries. Not a bad feat for a company that began life in Ina Broderick’s kitchen.

When her sons went off to school in the early eighties, Ina began making homemade cakes for local coffee shops. As business grew, she looked to her children to lend a hand and so it was that Barry and Bernard found themselves down the local supermarket being questioned about the amount of Digestive biscuits they were buying. “We’d say we’re just having a party”, Barry laughs, “and then at home we’d have to break them up and put them into rings and bang them down. So that was our childhood. Not many other kids’ parents or mums did this sort of thing so it was a bit different and it was just a bit of fun.” After completing a degree and masters in business and commerce, Barry returned to work with his mother while trying to figure out what he wanted to do. The products were all created fresh for next day business and Barry says they would always be up late on a Friday to make sure they delivered for the weekend.

We worked very well, we didn’t clash too much and it was good. She was always very supportive and we were very helpful to each other so it was a very good working relationship. We started making more different cakes and then it kind of progressed from there. I got more interested in it and thought we could bring it somewhere.

When Bernard came on board in 2002, the brothers decided to target the emerging grab and go market. “We wanted to create something that would have more shelf life in it and also we saw a gap, grab and go had really started to take off and we felt what was out there wasn’t very good.” The brothers believed the quality ingredients they used in their fresh cakes like Belgian chocolate and butter could be used to create a much better convenient product for the market. 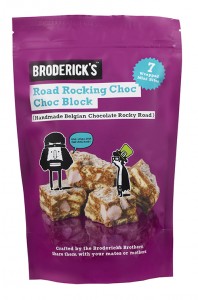 The first products released to test the brothers’ theory were the Gooey Ooozy Chocolately Solid Brick and Tiff Toff in the Tuffen. Barry says they wanted to create cakes and bars that they would want to eat themselves. “It’s very much what I like to eat or what Bernard likes to eat. Whenever we are testing or making products, if we don’t believe in it, we won’t make it. With brownies and everything else, I’ve made hundreds of thousands of different versions and we won’t put it out there unless we like it.”

Sampling all the new and existing products every day might have quite an effect on waistlines (Barry claims it doesn’t) but it guarantees a level of quality control over the range. “We’re tasting products all the time and making sure that it’s ok, getting involved in the kitchen, trying to come up with new products and new stuff and always making tweaks. I’m forever going in to shops and cafes and just trying what they have on offer to see if there’s something we can improve upon for our own products or get different ideas.”

Inspired by trends in lots of different markets, the brothers expanded the Broderick’s range to include lots of new flavours and a range of different sizes. Their big ‘manly’ bars are modelled on traybakes you would get in cafés and the little mini bites are perfect for sharing and speak to the calorie conscious market. 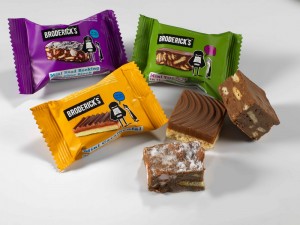 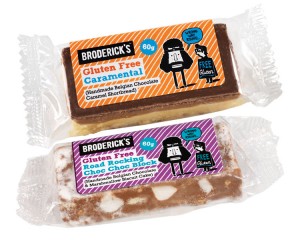 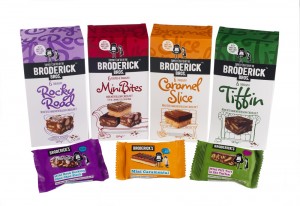 In an age of hyper allergen awareness, it is no surprise that Broderick’s have started a journey down the free from route. They have several gluten free products already including a caramel slice, rocky road and nut bars. Barry says you have to be able to look at trends and identify how you can bring something different to the arena. “We felt there was a lot of gluten free products out there that didn’t taste great so we said right, maybe we can create something so someone who likes our regular bar might like a gluten free version of it. We’re getting very good reaction off the products. Our Dad’s a coeliac as well, he’s very happy with our new invention.”

The next step for the Broderick brothers is a healthier version of what has come before. Using as few ingredients as possible, they hope to create a product that is still tasty and considered a treat, but is natural, really healthy and nutritionally good for you. The development of new products takes a long time though and Barry says even though they have been working on the idea for quite a while, it won’t be ready for the market until early next year.

We’ve been tweaking it for over a year so hopefully it will be ready to launch early next year. We want to get it right and also we want to come up with something a bit innovative. There’s a lot of different things out there at the moment but we wanted to come up with something that we are proud of and that we think is different. So that takes time, it takes a lot of trial and error to get it right.

While the research and development of new products is ongoing, the Broderick brothers are constantly busy trying to expand the business all over the world. “We just want to build and grow it, export is very much a focus. We don’t just develop products with Ireland in mind, we think further afield and that’s why sometimes it takes longer, because you have to take into account other tastes and things.” With a strong base already established in Europe, Barry says they are now looking at new routes into the Middle East among other far flung destinations.

He maintains that the most important aspect of a sale is getting the potential buyer to try the products. “Branding and everything, all that can help but if the product doesn’t taste right you have nothing.” Their presence on airlines has helped to get the brand out to a wider audience with the kind of promotion you couldn’t pay for. “It’s especially good when you’re a small company and you don’t have a marketing budget to spend on getting your brand out there.” 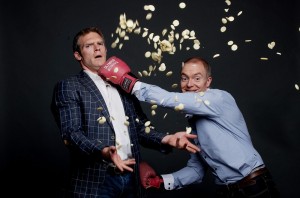 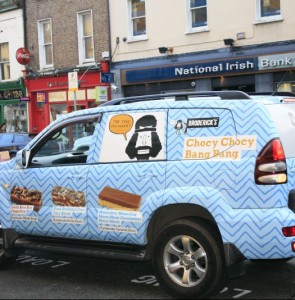 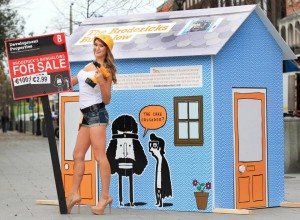 The Broderick brand is driven by the brothers and their unique relationship. Cartoon versions of Barry and Bernard adorn not only the packaging on the products but also the website and all promotional material. The humour is inspired by the boys, even extending to a ridiculous FAQ section on the site that includes gems such as number 40. Will your products give me superpowers and if so will these powers include enhanced baking abilities? Yes, they give unusual superpowers. For example, the ability to mimic perfectly, the ability to talk to animals and yes, the ability to bake delicious cakes.

The quirky branding strategy was augmented with a fleet of amusing transportation devices, the Choco Rocket, the Chocy Chocy Bang Bang and the Sticky Wicky Licky Lorry, all bearing the signature Broderick style and sense of humour. Barry insists it is not a gimmick but a reflection of the boys. “The polite way of putting it is that we disagree every single day. So when we were sitting down with the branding and agency guys, they picked that up pretty quickly and that’s where the idea came from. Anyone who knows us would agree, with regard to the characters they’re very much based on us. We don’t take ourselves very seriously, hopefully in years to come as the brand grows we can have a lot more fun with that.”

Fun and games aside, the Brodericks have a real sense of pride in what they do and all that they have achieved. Inspired by their mother and driven by brotherly competition, Barry and Bernard have created a range of products that is one of the most successful and recognisable in Ireland.

What drives us is we want to produce a brilliant product and we want to create something that we’re proud of. We make it ourselves, we’re not some company who gets somebody else to make it. We’re heavily involved in production, in the design of the product, in making it. Yes we want to see it grow and we kick out of it when somebody in some other country emails us and says how much they loved the product and where can they get it. When we see it on the shelves in Selfridge’s or in Galeries Lafayette in France or something, it does give us a little kick.

You can find Broderick’s products in your local Starbucks, Caffè Nero, Insomnia, Spar and Dunnes. They are also available internationally at Selfridges, Costco, Galeries Lafayette and the Centre George Pompidou in France and Dutch supermarket chain Albert Heijn. 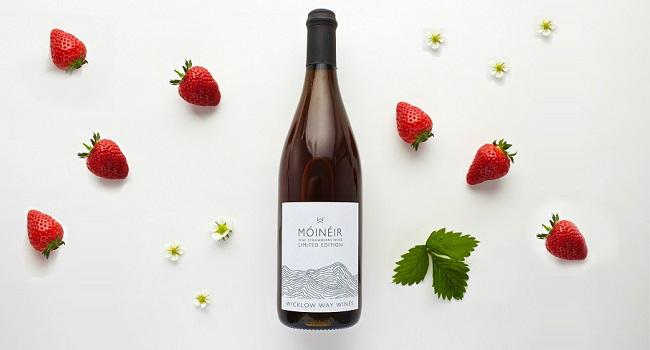 A Fine Strawberry Wine with an I… 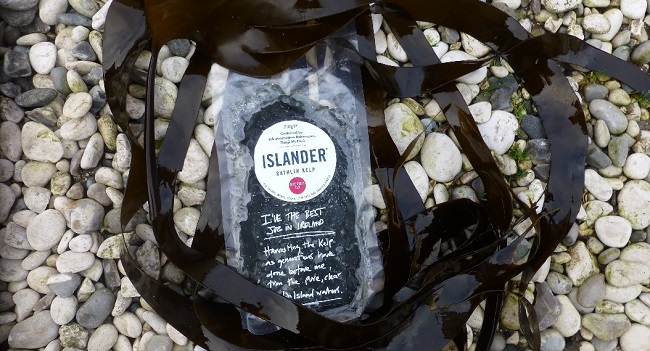 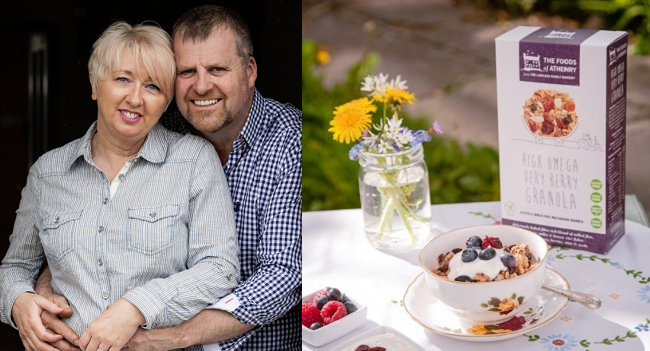 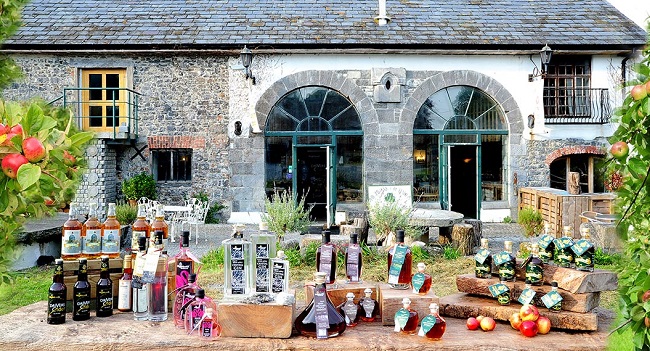