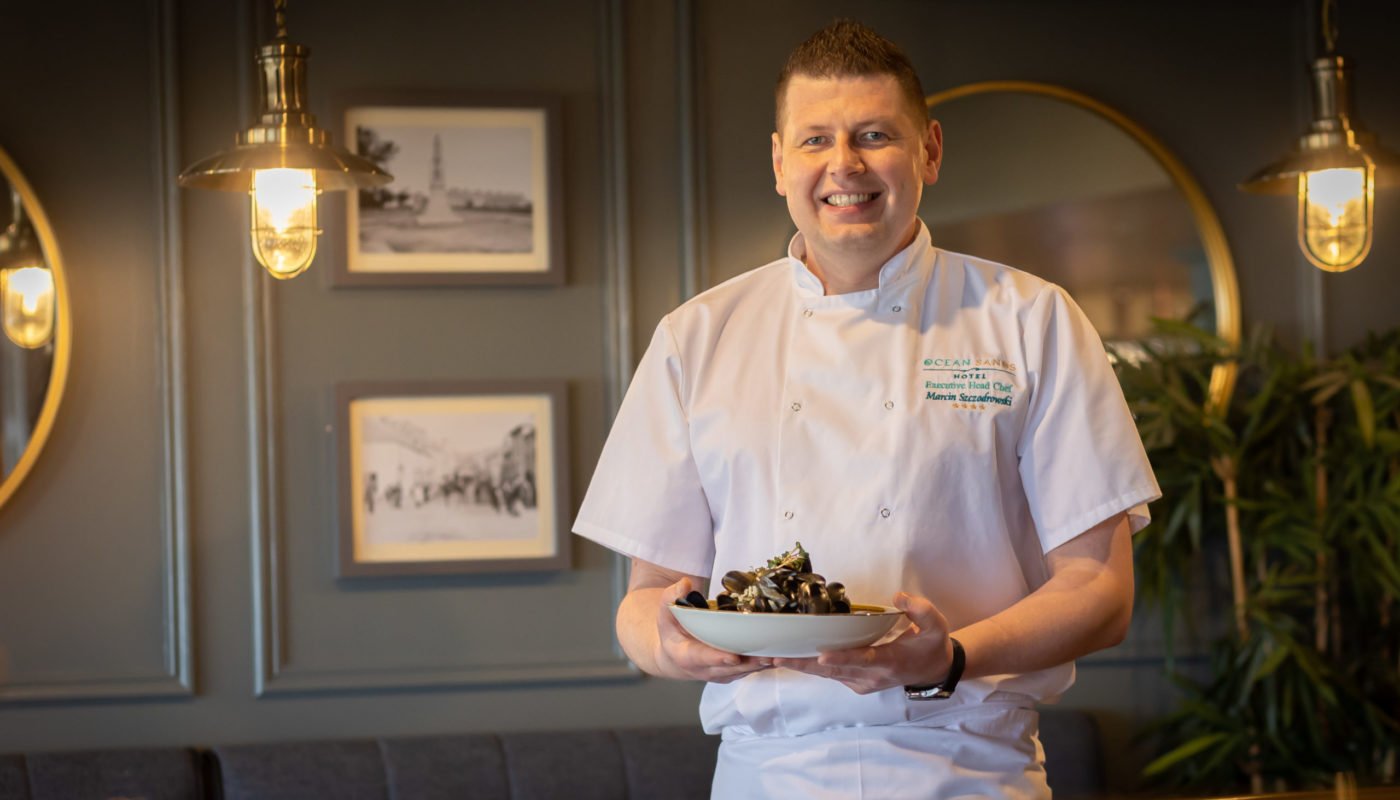 Aiming to deliver five-star food in a four-star property might be ambitious but it’s also achievable, according to chef Marcin Szczodrowski, who is currently wowing diners at the Ocean Sands Hotel, Enniscrone, County Sligo. We have been to this superbly located hotel before and can attest to its status as one of the best in the West. As for the views across the expanse of Enniscrone beach – well, you have to see it to believe it. You can bet your bottom euro, however, that Marcin doesn’t see much of the stretch of the seemingly never-ending strand. Simply put, he’s too busy tending to his kitchen and all that goes into developing a terrific culinary experience for anyone that cares to put their feet under the table and their hands on the menu.

From the city of Staragard Gdański in northern Poland, from a very young age Marcin became fascinated by all things cooking and food-related. He says that the lessons he learned at the hems of his grandmother’s skirts have been with him forever. “Grandma taught me to appreciate fresh organic products. She has a huge garden, and she grows fresh veg and fruits. When my parents were working, I used to go to my grandmother every day after school. I would help her in the garden and then we would go into her kitchen and cook the fresh produce. I have seen everything from the beginning of the process, from planting to cooking. Through those early experiences, I learned how important it is to work hard in the garden, and how much time and dedication is required to get things exactly right. Knowing this has taught me to respect fresh produce, which in turn has shown me not to waste anything.”

Authentic food provenance is an essential foundation of Marcin’s cooking. “I think I brought it from my teenage years. Having knowledge about the produce is a great help in the kitchen, and I enjoy using as much local produce as possible.” As well as absorbing everything about fresh produce from his grandmother, Marcin had another teacher. His grandfather was a butcher and taught the enthusiastic young chef all about meat, its preparation and its presentation. “When my grandfather worked as a butcher,” explains Marcin, “he showed me how to divide and cut. My parents were surprised that at the age of 12 I might be interested in such a career. Of course, at such a young age I didn’t know that one day I would be a professional chef, but there’s no doubt that the inspiration and influences from my grandmother and grandfather directed me to be where I am now.”

Back in 2007, at the age of 19, having finished his culinary studies, leaving Staragard Gdański for Ireland was a challenging thing to do. With very little English to guide him through the linguistic bewilderments that rural Irish accents can sometimes conjure up (“I had English in school for a few years, but that’s a different story if you fly to another country and you are speaking it. To be honest, it was not easy being in a different country with a different language, with no relatives or family”), he nonetheless got stuck in and progressed. Through setting goals for himself and his craft, through layers of ambition that gradually came to something very good indeed, he reached what he was aiming for and hasn’t looked back.

“My career is progressing all the time,” says Marcin, who earlier in his career went on to win the Yes Chef Rising Star and Best Chef in Connaught awards. He subsequently rose to the position of Head Chef at Sligo’s Eala Bhán Restaurant. “For the last 15 years I have only been cooking in restaurants, and it was only in the last year that I decided to switch to the hotel hospitality industry. I wanted to try something else as being head chef in a restaurant and being the executive chef in a hotel are two totally different things. When I think about it, ten years ago I didn’t know I would be where I am now. I had no idea I was going to be winning awards or that restaurants I worked in would win prizes for my food.”

Such is the way of life, the universe and everything, but along with accepting what is thrown at you – the good, the bad, the downright frustrating, the brilliantly uplifting – is learning from them. I ask Marcin what does he think are the most important lessons he has learned about himself and his craft during the years he has been in Ireland? Throughout every chef’s career, he advises, one of the things that must be done is to never give up. Resilience, he implies, is key. “You need to motivate yourself and other chefs in the kitchen. There is a lot of pressure and stress in kitchens, and so the atmosphere at work must be good. Why? Because a happy chef equals a happy customer.”

Marcin is fully aware that the industry he works in is constantly evolving. It is, he says, what keeps him interested and invested. “It gives me great motivation. I think people demand more and more from chefs, which is great because to be on top you need more and more knowledge. You also have to try new things, advance creatively and professionally, to increase your knowledge. In my opinion, cooking is not about just putting five ingredients into a pot and cooking it. It’s really quite simple – if you don’t improve in the kitchen then you should not be a chef.”

About Me – Tony Clayton Lea

I am an Irish-based freelance journalist/writer/editor who writes mostly on music, pop culture, film and travel for a variety of print and online outlets.