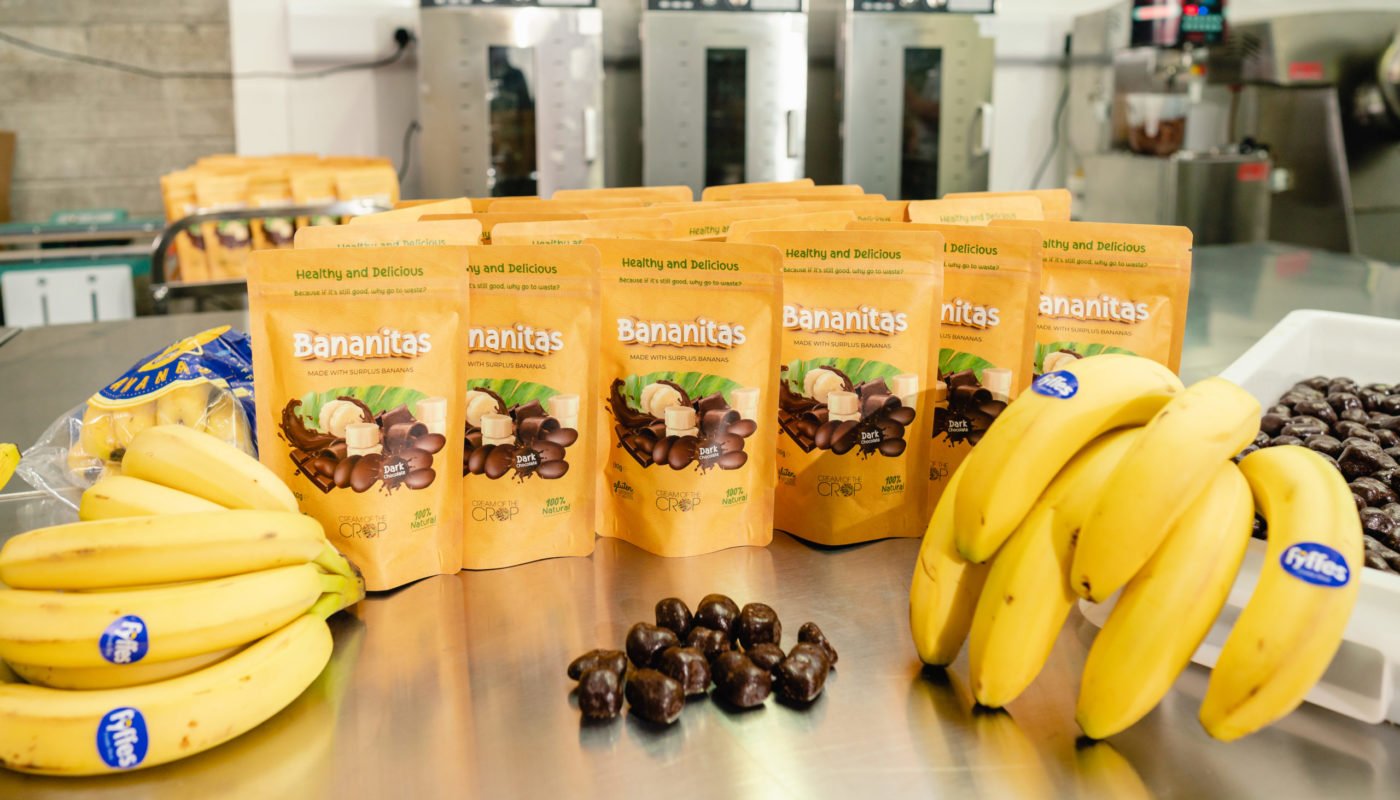 Following a successful Kickstarter crowdfunding campaign, which raised the €14,500 required to help purchase specialist equipment, Dublin-based zero waste foods brand, Cream Of The Crop, has launched a new snack product called ‘Bananitas’ – the first in its range to be available for delivery nationwide.

As part of a recently announced official sustainability-focused partnership with Fyffes – one of the world’s leading distributors of tropical produce, and currently Europe’s largest importer of Fairtrade bananas – Giselle Makinde’s innovative business will collect up to two tonnes of surplus bananas per month from Fyffes’ Ripening Centre in Balbriggan to produce Bananitas – a 100% natural healthy zero waste snack inspired by Giselle’s childhood memories of growing up in Brazil.

Cream Of The Crop helps battle food waste by using surplus ingredients that would otherwise end up in landfill or, in this instance, be converted into biofuel to create a range of delicious zero waste products, which also includes a wide variety of gelatos and sorbets.

From Cream Of The Crop’s new state-of-the-art 1,700 sq. ft new production facility on the Ballycoolin Road, Dublin 11, Giselle and her passionate team have the capability to save up to twenty-four tonnes of bananas from landfill each year. The purchase of specialist dehydrators and chocolate coating machines using funds from its Kickstarter campaign now means that they can utilise Fyffes’ perfectly ripe bananas – only deemed as surplus because they don’t meet the supermarkets’ stringent specification criteria – to produce Bananitas.

Consisting of dried banana bites coated in 70% dark chocolate, which are 100% natural, gluten-free, vegan friendly, and high in fibre, Bananitas become the first non-frozen product in the Cream Of The Crop range – removing the logistical issues involved in transporting and storing frozen foods, and allowing for nationwide distribution and delivery.

Commenting on the launch of Bananitas, Cream Of The Crop’s Founder, Giselle Makinde, said: “Bananitas have been in my long-term plans for a while now, ever since I first started discussions with Fyffes about a sustainability partnership. I’m delighted to finally be able to launch them and have created a delicious zero waste product that can now be delivered nationwide. I’d also like to take this opportunity to say a huge thank you to everyone who supported the Kickstarter campaign and helped make this product a reality.”

Bananitas are available to purchase online at www.creamofthecropfood.com in 130g compostable packs priced at €4.90 each, or €26.50 for a bundle containing x6 packs (130g each), either for collection (Monday to Friday, 8:00am to 4:00pm) from Cream Of The Crop’s premises at the Premier Business Park on the Ballycoolin Road, Dublin 11, or for delivery nationwide. They are also set to be stocked in a range of leading independent artisan food stores across the country.

A post shared by Cream Of The Crop Food (@creamofthecropfood)

About Giselle Makinde (Cream Of The Crop):

Giselle Makinde, who only moved to Ireland with her family in June 2018, completed specialist courses at the Carpigiani Gelato University in Anzola dell’Emilia near Bologna, Italy to help hone her gelato making skills before launching Cream Of The Crop.

When she started selling online in September 2020 with a range of innovative flavours that change on a weekly basis, all of Giselle’s products were created in a spare room in her Portmarnock home that she had converted into a food production ‘lab’. Following a hugely successful first six months in business, in Spring 2021 Cream Of The Crop relocated to a new 1,600 sq. ft state-of-the-art premises on Cork Street, Dublin 8. This move increased Giselle’s ability to process and make use of ten times the amount of surplus food than she was able to before – equating to as many as eight tonnes of food waste in 2021 alone. A recent relocation to new premises on the Ballycoolin Road, Dublin 11 will increase the amount of surplus saved in 2022 to twenty-four tonnes.

Previous to launching Cream Of The Crop, Giselle held roles at Dublin’s As One restaurant and Cloud Picker’s cafe (Head Chef) on Pearse St – eateries that both put a sustainable ethos and a zero waste approach to food at the forefront of their businesses.

These experiences ignited Giselle’s own personal passion for battling food waste and opened her mind to the possibility of launching her own range of products that could help extend the shelf life of, and make the most of, surplus produce – something that was fast-tracked as a direct result of the COVID-19 pandemic. This was fuelled further by a week spent staging at Amsterdam’s InStock restaurant late in 2019, allowing Giselle to better understand exactly how they were able to run a successful business built around a model of turning surplus food into delicious meals.