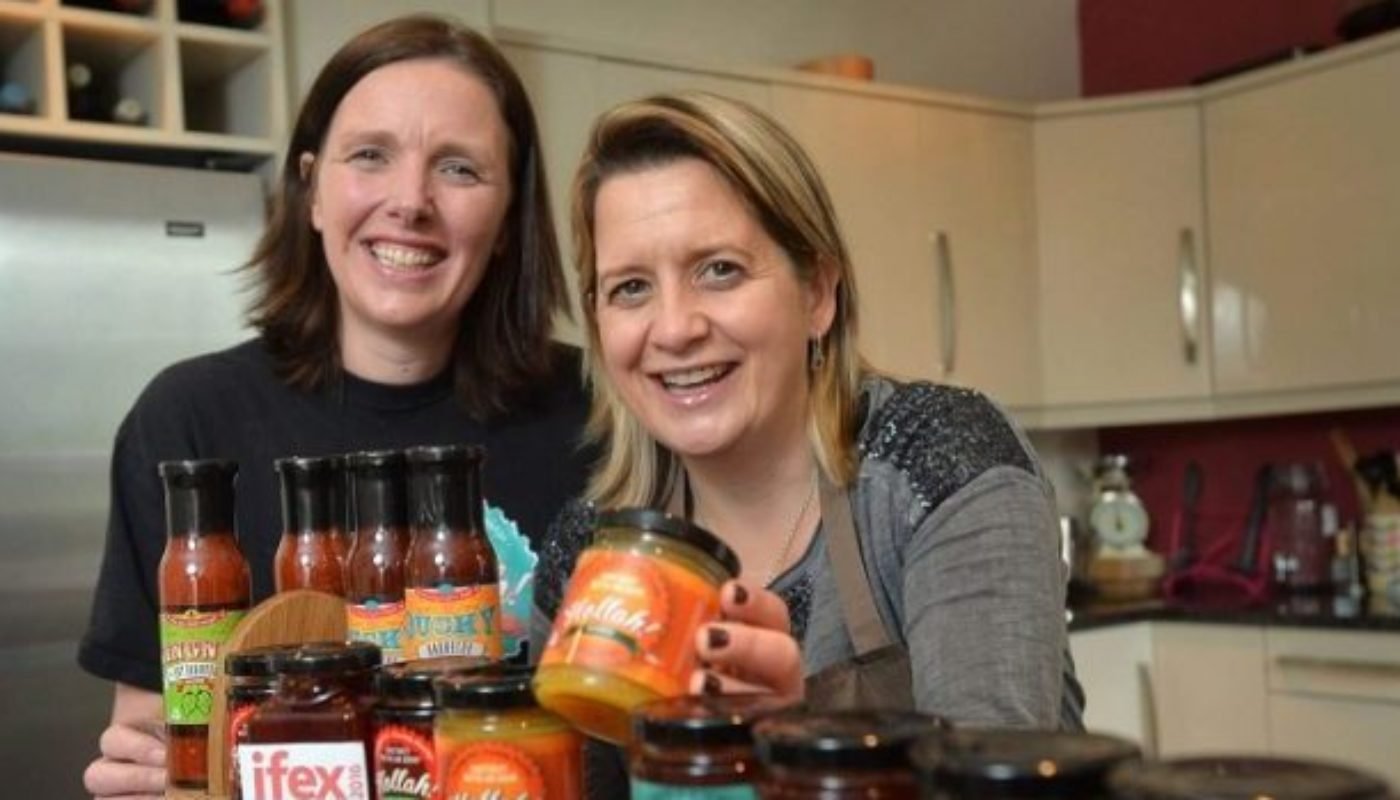 With a mission to get back into the workforce on their terms, Trudy and Paula hatched plan to come back with a bang and schemed, admittedly over a several glasses over wine and craft beer, to create a brand of chutneys and chilli jams that made an impression. Though catching up with company creators the first thing we want to know is where the hell does the name Hollah hail from?

“It’s an amalgamation of our surnames,” explains Trudy. “Embarrassingly we have been introduced as the ‘Ho’ and the ‘La’,” she adds, cringing – and having met with the pair first at the Producer Showcase at CATEX exhibition we can confirm this is an introduction that is indeed actively used.

The very first Hollah Preserving recipe came to them as naturally as the brand name did it seems:

“Paula had been making chutneys for years using apples that were going to waste in her mother’s garden. It was just a hobby at Christmas. My family and I had spent time is the USA and were interested in the craft beer scene and toyed with the idea of starting a craft ale business. After a few too many ales one night we mixed the apple chutney with some home-made craft ale and the first Hollah flavour emerged. The apple and ale chutney!”

And so the first of Hollah’s quirky, boozy condiments was born. Trudy and Paula have since swapped sauce for spice, developing range of condiments spiked with chilli.A lot of hard work has been behind the leap from their initial idea to the shop shelf. “The early days saw Paula and I cooking up a storm in both of our home kitchens, labelling until all hours of the night. We got our first break with Peter Hannan in Moira, who is a great supporter of local start-up businesses” – and as the good word spread, demand from other suppliers rolled in.

Though starting small, like many other fledgling food producers, Trudy says from the beginning they had high hopes for Hollah: “We always wanted it to be a global brand. Daft as it sounds, we want to be Ireland’s female answer to Levis Roots and his Reggae Reggae sauce.”On what makes them stand out from the crowd, she says:

“Hollah dares to be different. We put prosecco in a chilli jam, Buckfast in a BBQ sauce! Sure why not? Life’s too short to eat boring food. We feel we have a modern relatable brand. We want Hollah to be seen as rockin’ relishes! Our strap line right at the start was ‘Preserving Food, Friendships and Our Sanity’. We want people to enjoy Hollah on shared platters with friends; its more than just a condiment it’s a talking point.”

Setting up the business as a means to reclaim their careers, Hollah itself has grown into another family member. “It has become like another child needing constant attention. We had to learn how to manage our time efficiently and really scrutinise our decisions.”

While they had to learn how to be accountants, manufacturers and distributors, branding, marketing, and developing new products and flavours came naturally to Trudy and Paula. “Chilli Strawberry and Prosecco jam was best seller for a long time, and the Bucky BBQ sauce which won a Great Taste award. But we are very excited about the launch of our new products in particular our Hot Honeys. They are Hollah’s first all natural sweet chilli sauce. We have Jalapeño and Habanero flavours and they are amazing on chicken, drizzled on chorizo and blue cheese or even mess with your mind and put it on ice cream!”

Trudy admits Paula is the queen of concocting new recipes: “The Hollah Dawg which was last year’s must have hot dog mustard was something she had been dreaming of for years. It’s a yummy mustard gherkin pickle for the BBQ season. Local restaurants are using it a lot more on pastrami and rye style sandwiches.”

Paula reveals her own personal favourite product, the new smoking hot sauce, is a dieter’s dream. “I’m a slimming world freak at the minute as I’m trying to slim into my summer clothes. The wee hot sauces are tasty with chicken salads, added to soups or splashed on a homemade pizza. They are only 35 calories for the whole bottle.” Whereas for Trudy there is little that can’t be improved without a dash of Hollah hot sauce: “The Wingnut was always my favourite, although it is fiery. I add it to tacos, mix it with coleslaw, or we are often found hosting the hot wing challenge in our house!”

If the unique flavours and brand name don’t lure you in at the shop shelf, then the bright eye-catching packaging will surely seal the deal, and the pair think it has been key to their success. “We have a great graphic designer who is a dear friend of ours and he gets our mad ideas, so we have to give a big shout out to Paul at Three creative Design in Belfast.”

Hollah is currently doing its thing, getting noticed on the shelves of butchers, artisan food stores and Supervalus in the north of Ireland, and will be making impact in the aisles of Supervalus in the south soon. Across the water, the plucky preserves are stocked in one of the worlds most luxurious department stores, Fortnum and Mason, in Piccadilly, London. You can also buy Hollah directly via their online store.

Trudy and Paula set up Hollah not only to bottle great preserves, but to preserve their own sanity too. “Our sanity has long gone,” laughs Trudy. Though despite the business getting busier and busier, with the launch of Hollah Hot Honey creating quite a buzz in particular, they say it has been incredibly rewarding to be their boss, “and we are still at the school gates most days.”

It seems the magic recipe for this growing food business has a base of friendship, a heaping measure of laughter, and a large dose of ambition. “We would like to see Hollah on every dining table across the UK, Ireland and beyond. Forget ketchup make every day a Hollah day!”