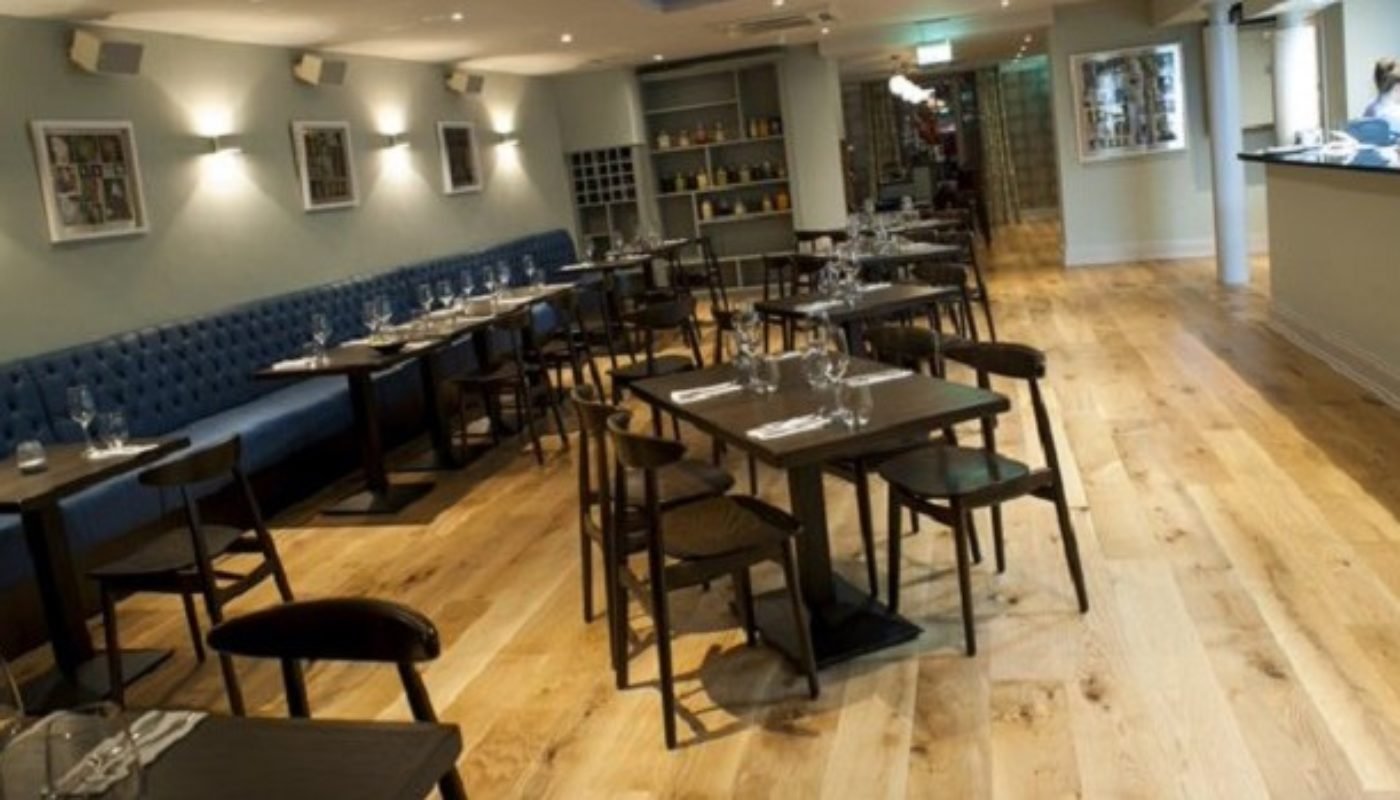 Wine & Brine located on the Main Street in Moira, County Armagh celebrates its first birthday on 5 December but despite its infancy it was recently awarded a Michelin Bib Gourmand and the title of Best Local Restaurant in the UK according to the Waitrose Good Food Guide for 2017.

The restaurant was opened by Head Chef Chris McGowan and his wife Davina at the tail end of 2015 quickly establishing itself as one of Northern Ireland’s ‘must-visit’ restaurants. I have been looking forward to trying out the food for myself and finally had the opportunity to do so recently.

McGowan is a chef with a serious culinary pedigree. Before returning to Northern Ireland and opening Wine & Brine, he worked for twenty years in London with top chefs such as the legendary Pierre Koffmann at La Tante Claire, Bruno Loubet, Gary Rhodes and for over a decade with County Meath born chef Richard Corrigan in his Mayfair restaurant. In fact, Corrigan’s nose-to-tail philosophy has had a huge influence on McGowan and is something that is evident throughout the menu in Wine & Brine.

The Georgian building which houses the restaurant has been lovingly refurbished but still retains many of its period features. The building looks compact from the outside but opens up Tardis-like into a surprisingly large space. At the front is a well-stocked bar which leads into the spacious dining room and to the side is an open kitchen where McGowan works his magic producing food that you will just want to get stuck in and eat.

The room has a contemporary but relaxed feel to it and once settled at our dark wooden table beside the blue leather banquette seating we ordered a gin and tonic each. We both decided to go for gins from Northern Irish craft distilleries; Boatyard for me and Shortcross for my companion and we happily sipped away and examined the menu.

The menu is divided into four sections and includes Snacks, Starters, Main Courses and Desserts. We quickly decided to order some of the Snacks which we asked to be served together. Within a short time our table was laden with three of the dishes on offer. Bread, Curd, Brown Butter (£3.50) which included superior wheaten bread with a rather curious, but tasty, sweetness to it and a small round ‘bloomer’ loaf which was served sliced in two. These were served along with wonderful goat’s curd and a large pat of almost nutty tasting brown butter. Cod Cheeks, Oyster Mayo (£4.50) were also delicious. They were cooked simply – lightly breadcrumbed before being deep-fried and served in a bowl alongside a wonderful oyster mayonnaise. I first tasted oyster mayonnaise in a Galway restaurant at the beginning of the year and with its underlying minerality and fresh taste of the sea it is something that I have become addicted to. It was the perfect accompaniment to the plump and juicy cod cheeks. As soon as we saw the Homemade Black Pudding Sausage Rolls, House Ketchup (£5) listed on the menu we knew that we had to order them! Three bite-sized sausage rolls were served with a flavoursome homemade tomato ketchup which mercifully, unlike commercially produced versions, was not over-sweetened but retained a certain acidity that cut through the richness of the deeply meaty sausage rolls. The snacks are designed to share and between the two of us we polished off the lot and sat in happy anticipation waiting for our starters to arrive. My starter – Crispy Hen’s Egg, Salt Cod, Pulled Ham Knuckle (£7) was another full-flavoured dish comprising a soft-boiled egg that had been breadcrumbed and deep-fried, sitting on a purée of salt cod underneath which was hidden some meaty strands of pulled ham knuckle. This was a beautifully presented dish which was all about contrasts; the softness of the salt cod against the crunchy breadcrumb coating of the egg and the rich creamy yolk. I loved it. My companion’s Pumpkin Risotto, Beef Short Rib(£5.50) was comfort food heaven in a bowl; full of punchy flavours and soothing textures. I particular loved the combination of the melt-in-the-mouth beef with the nutty sweetness of the pumpkin. This is the sort of food that I find impossible to resist and I kept leaning across the table to steal the odd forkful much, I imagine, to the irritation of my dining companion. Main courses kept up the comfort food theme. My Pan-Roasted Wild Halibut, Cockles, Cured Bacon (£20) was a striking looking dish which included two large pieces of perfectly cooked halibut served with tender-stem broccoli which was served steamed as a garnish on top of the fish and as a vibrant looking sauce. I also detected a gentle taste of garlic in the sauce and initially thought that it had been made using wild garlic but either way it married beautifully with the salty bacon lardons and the sweetness of the cockles to create a dish which was profoundly satisfying. Across the table Pheasant, Sprout Tops, Chestnut, Bacon (£16) was going down a treat. Pheasant has a tendency to dry out during cooking but here it had been sensitively handled and was still succulent. A velvety smooth chestnut purée and an almost sticky jus accentuated rather than swamped the flavour of the pheasant and both were fabulous eaten with the wilted sprout tops. This was a hearty dish but one that felt sophisticated. Although well sated at this stage, we decided to sample a couple of the desserts. As a huge lover of anything containing lemon, I quickly decided on the Lemon Curd, Basil, Meringue (£6) which had been artfully plated and looked sensational. Essentially this was Wine & Brine’s take on a classic lemon meringue pie with added interest provided by a drizzle of basil sauce and an intensely flavoured lemon gel. The Rhubarb Soufflé, Vanilla (£7) was one of the best desserts I have had this year. The soufflé is made to order and arrived to our table standing proud. With appropriate pomp and ceremony, our waitress made a hole in the top of the soufflé and popped in a quenelle of vanilla ice-cream. Crème Anglaise was also served on the side and this also made its way into the soufflé. We spent the next few minutes savouring every last bite of this heavenly dessert which managed to evoke all the tastes of the very best rhubarb crumble. This was a wonderful finish to our meal.

We had decided to forgo wine with our meal, happy to sip on the gins that we had ordered but glancing through the list I was impressed by the well-chosen and somewhat eclectic wines on offer and noted that many of them were very reasonably priced.

The food in Wine & Brine strikes a perfect balance between the heartiness of home cooking and the elegance of the best fining dining restaurant. The slick but friendly service immediately puts the diner at ease and creates a homely ambience. Portion sizes are generous and considering the quality of the food that we ate, represented astonishing value for money. Moira is about 35 minutes from Belfast and a two hour drive from Dublin and is easy to reach. I urge you to book a table.