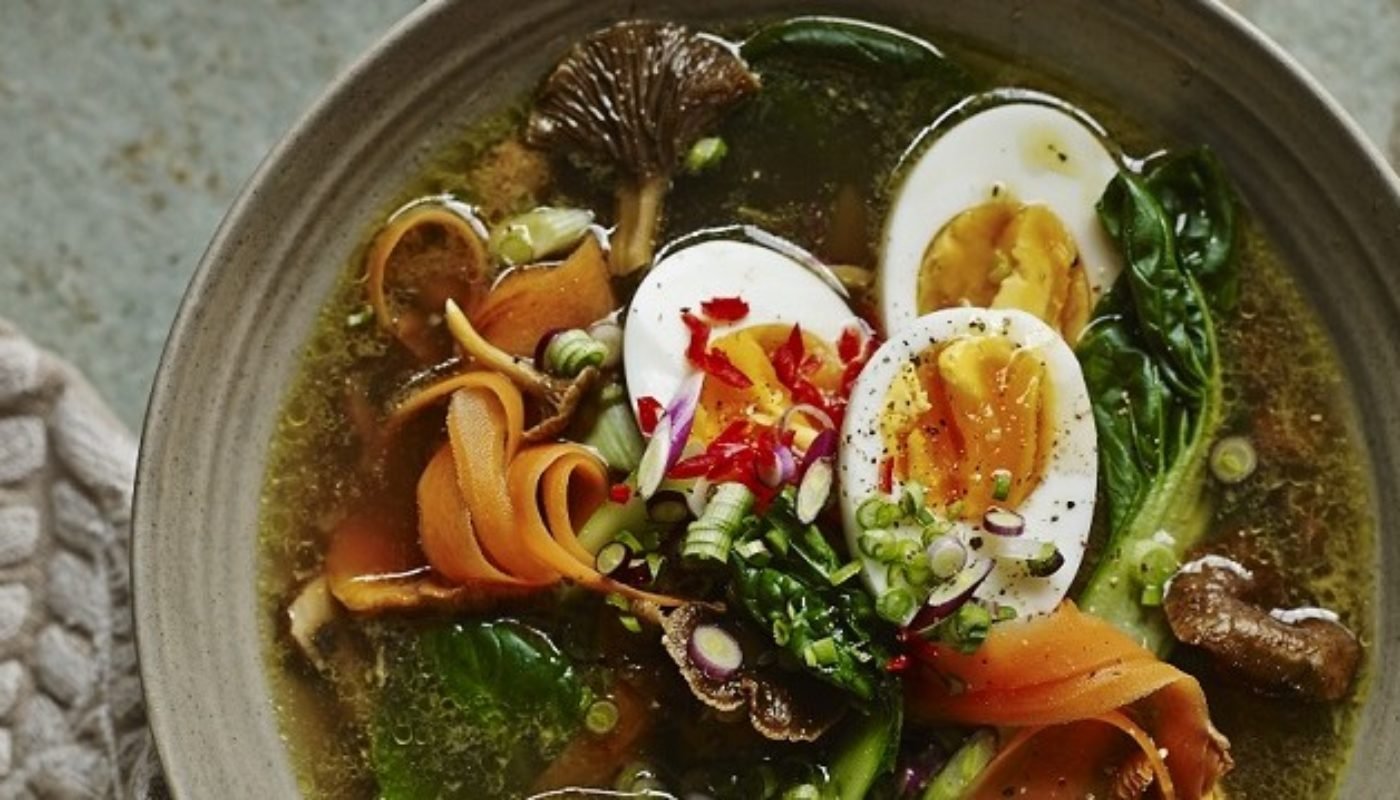 I love pho for supper; it’s a Vietnamese-inspired soup with plenty of heartwarming veg. This is the perfect light meal for a cold night when you’re looking to get loads of vitamins in one hit.

1. Heat the oil or butter in a pan, throw in the garlic and ginger and cook for 30 seconds, then throw in the mushrooms and stir-fry for 2 minutes. Pour over the stock, tamari, star anise and cinnamon stick and bring to a boil, then reduce to a simmer and cook for 10 minutes.
2. Throw the carrots and pak choi into the soup to cook for a further 7 minutes while you prepare the eggs.
3. Gently lower the eggs one by one into a pan half-filled with boiling water and boil for 5 minutes for runny yolks and 9 minutes for hard-boiled. Drain and hold under cold running water to stop them
cooking and to cool them enough to peel.
4. Ladle the soup into two bowls, slice the eggs in half and place on top of the soup. Throw the chilli and spring onions over the soup to serve.
5. When you come across the cinnamon stick or star anise, remove them, they are there to add flavour to the soup but not to be eaten. Madeleine Shaw is a trained nutritional health coach, food blogger and creative cook. Her six-week ‘Get the Glow’ programme is in-demand by an impressive list of high-profile clients, all of whom Madeleine has helped enliven the hottest, healthiest and happiest versions of themselves. Her first book based on the programme, ‘Get the Glow’, was a roaring success, and her second book ‘Ready Steady Glow’ aims to make eating well achievable for everyone, no matter how hectic their schedule may be.

Ready, Steady, Glow is a book of two halves offering weekday recipes that can be made in less than 30 minutes, alongside sumptuous show-stopping meals perfect for the weekend. All recipes are wheat- and sugar-free, bursting with flavour and nutritional value, and contain natural ingredients that can be found in your local supermarket.