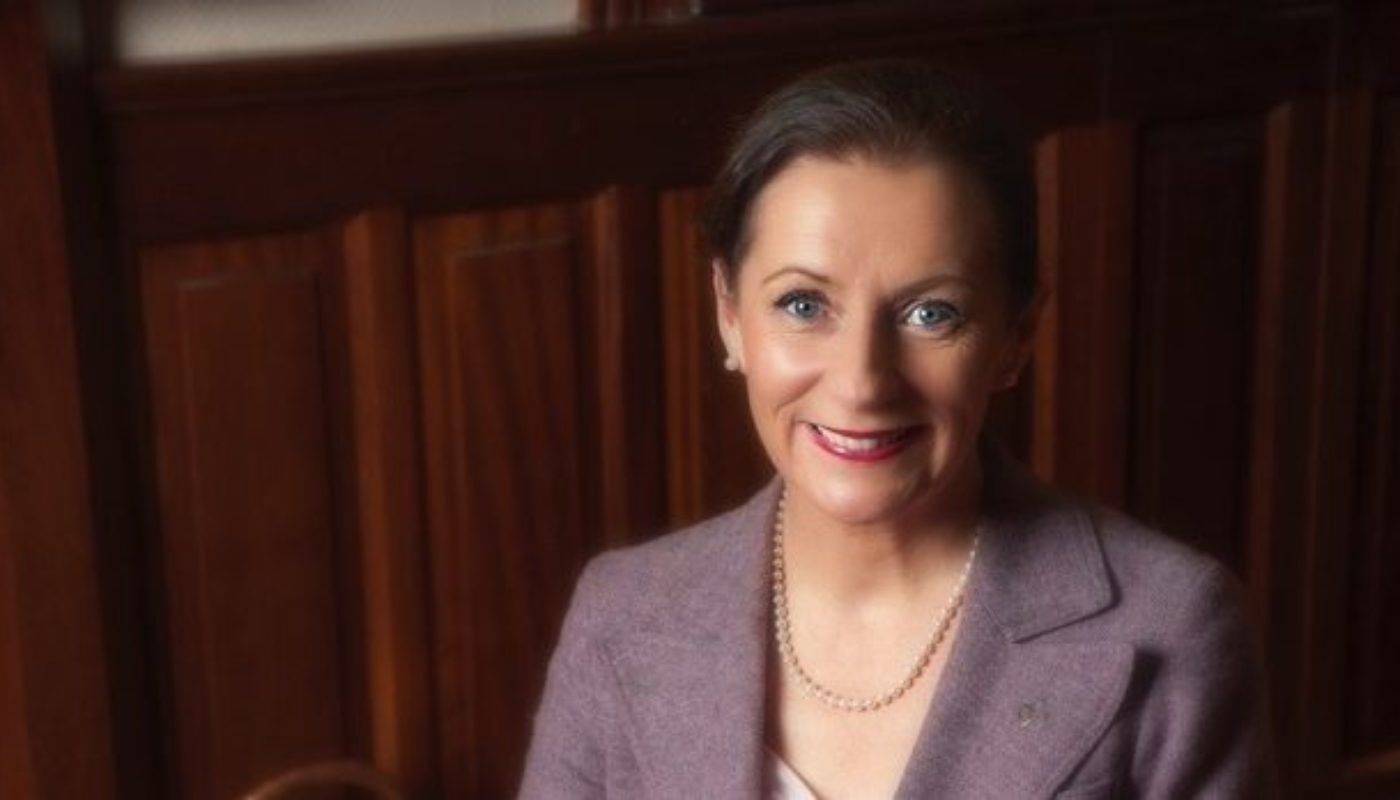 Words that spring to mind when thinking of Ireland’s most Northerly county of Donegal? “A bit elusive, mystical, rugged, wild and untamed”, says Harvey’s Point Hotelier Deirdre McGlone. “We’ve always been a little bit out there – no more so than now with National Geographic calling us the coolest place on the planet…and for once they weren’t talking about the weather!” she laughs.

Originally from Ballintra, Deirdre has assumed the role of a fervent ambassador for Donegal tourism, an informal role which became official when she was voted Donegal Person of the Year 2016. Lamenting handing over her crown this month, Deirdre reflects on what has been a phenomenal year –  “you know when you can just count your blessings and be thankful that so many good things have happened?” she muses. “It was a lovely thing on a personal level but it all dovetailed nicely with my passion for promoting Donegal as a destination so it was a great platform for me and great fun of course – I was never at home!” she says, again laughing wholeheartedly, as she would do throughout our chat. Having earned an honours degree in European Studies in what is now the University of Limerick, Deirdre recalls being “at that age where I was kind of floating.” Working in catering since the tender age of 13, Deirdre had unearthed her love for working with people, serving, pulling pints and “just enjoying the craic with guests” but  never envisaged that this would become her entire career. But taking on the role of receptionist at a Lough Eske guest house in 1989 as a Summer job, Deirdre never looked back.

While Donegal itself is National Geographic’s coolest place on Earth, Deirdre’s Harvey’s Point Hotel has in recent years picked up numerous distinctions, putting their haven by Lough Eske on the map at a global level.  Among these is the TripAdvisor Travellers’ Choice award for Number One Hotel in Ireland every year since 2013. Internationally, Harvey’s Point ranked as the 6th Best Hotel in Europe and the 18th Best Hotel in The World in the TripAdvisor Travellers’ Choice awards 2015. These accolades of course have propelled Harvey’s Point onto the world stage, but Deirdre notes that the majority of their custom is Irish and indeed Northern Irish as a border county. In recent years, Harvey’s has attracted increased numbers  travelling from Cork and Kerry coming up as a result of the Wild Atlantic Way, which Deidre notes is a fantastic marketing hook, as well as from the rest of Ireland.

On a global scale, Deirdre travels regularly to the States to pitch both Donegal and Harvey’s Point to the mid to high end leisure market in the US, which has seen their market split 50/50 between domestic and international visitors in high season – testament to Deirdre’s drive to put Harvey’s Point on the map.

What makes Harvey’s Point stand out amongst the rest to prospective visitors at home and abroad, in a somewhat tricky location tucked away in Donegal? Deirdre believes the food, stunning scenery and palatial rooms all play a part in the allure of Harvey’s Point but is certain that the thing that sets it apart “all the time – every time” is the staff.

It is the culture of caring and genuine Irish hospitality which somehow wonderfully emanates from every member of the staff whether they’re here 25 years or just the Summer season. We luckily, without knowing how we have done it, have instilled a culture in our business that every guest is really a guest not a room number and I think that has made the difference.

The goal, Deirdre tells me, is to offer an all round immersive experience rather than a package deal, the hallmark of which is the level of connection between staff and guests. “There’s a lot more than just pouring them their drinks and serving their food, a lot more interaction” as a result of the vast array of activities such as wine-tasting and cookery demos on offer to guests. The service in Harvey’s is designed to be more personable why adhering to high standards, an approach which Deirdre calls “Swiss-made in Ireland”. Mark’s heritage provides the Swiss mentality, Deirdre laughs – “so it is get it right or don’t do it all balanced with the Irish hospitality of ‘ah sure it’ll all be grand!”.

As the ethos of a family run business seems key to the success of Harvey’s Point, it seems the beloved destination will stand the test of time, with the next generation already showing great interest in the business. The eldest, Karl, 14, “has taken a real shine to the kitchen and every hour he’s allowed to work he is in the kitchen and learning the trade without us even suggesting it to him, he’s showing a big interest and learning to be a chef”, Deirdre says proudly. The next is James, who is 13 and less taken by the hospitality bug as Deirdre explains he is “only interested in football at the moment – and soon girls I guess!” she laughs. With their 11 year old daughter, Christina, Deirdre says it is too early to tell, but she has a feeling her youngest may be chasing her job! It is clear Harvey’s Point has become so much more than a hotel for so many people. “We have a lot of regular repeats who have become almost like family friends, we’ve seen generations come, for example a couple who got married here 10 years ago are now coming back with their kids”.  “We’ve been on that journey with many many people and that is so special that they still associate Harvey’s Point with memories number one but also future plans – budding brides and grooms and all that.”

The topic of the thriving wedding trade at Harvey’s Point brings us on to Deirdre’s own wedding tale,”I started as a giddy single girl” she reminisces about her early days working on reception in 1989. Then-owner Jody Gysling, from Switzerland, had just opened the guest house which would later become Harvey’s Point and enlisted his brother Mark to help in the kitchen. The rest, as they say, is history.  Noting that she was one of five girls in the family and the only one who hadn’t taken to cooking, Deirdre recalls her mother’s sage advice -“if you don’t learn to cook you’ll have to marry a chef!”. Deirdre’s gift of the gab and business acumen could be observed as she reveals how love managed to blossom between herself and Mark, a young, shy Swissman with very little English.

“I had a deal with him – I would teach him English if he would buy me pints of Guinness! The more pints he had the more his English improved and I had plenty to go on!”

Both clearly dedicated to their roles at Harvey’s Point having taken over in 1996, the pair managed to take a day off and were married on Valentine’s Day at the hotel, with all the staff in attendance to celebrate. Not content with just attributing her own love story to the magic of Harvey’s, Deirdre not only plays match-maker between the staff, telling me there are a few prospective matches ‘she’s working on’, but also delights in telling me about the many romances which have come to fruition at the hotel.

Some of the staff, who Deirdre fondly calls ‘the kids” have begun their own Harvey’s Point love stories, “hooking up” there and subsequently getting married – including Deirdre’s own niece Sarah. Sarah met Chris eight years ago, and they have since married (at the hotel, of course) and welcomed their first child, all the while working as Food & Beverage Manager and Head Chef at Harvey’s Point respectively.”It is amazing to see that, there is something in the air in Lough Eske and Harvey’s Point!” she beams.

In its secluded location, Harvey’s Point offers a digital detox and I can imagine it is the perfect destination to unplug from the outside world, but had to wonder if Deirdre herself ever does just that. “No, I don’t really switch off! But at the same time I’ve learned over the years to build a team that I can delegate to and be proud of and confident in, who share the same passion that I do.” In recent years, Deirdre has discovered that she can, and must, take the time out during high season to holiday with her family, noting just how important it is to strike a work-life balance in what is traditionally an industry known for unsociable hours.

To achieve this vital balance Deirdre says she and the family “go snooping around hotels” so she can see with fresh eyes how others run their businesses, and the hotels of choice are always family run. The kind of hotels Deirdre is drawn to are “not the sort of modern, minimalist sort of hotels that were built for reasons other than hotel-keeping” but those run by “people who share the love for hospitality”, which is a feature Deirdre feels you can sense as soon as you step through the door of a place.

Of course, being a hard-working hotelier isn’t always sunshine and rainbows, and naturally the current climate poses challenges for Harvey’s Point, as a border county. “Brexit for us is a challenge but not a crisis” she says with determination. Ever the pragmatist, Deirdre admits “it is not something we can control, all we can do is offer the best customer service and value we can, we did the same in the recession when we had to reduce prices because that was the climate”. Reflecting on tougher times, she recalls vowing not to compromise on quality or customer service, “but we also vowed not to discount so heavily that we couldn’t afford to survive.” A seasoned businesswoman, Deirdre is confident Harvey’s Point will endure and thrive.

Clearly in love with not only her surroundings in Donegal and Harvey’s Point but the life she has carved out for herself and her family, Deirdre muses on what have been the keys to success for her when asked what advice she has for aspirant businessmen and women. “Don’t be afraid to take risks but know what you are at, know the numbers, we all have passionate dreams but if they don’t make commercial sense they won’t be viable. Take advice and look, listen, learn and most of all, enjoy!”  Hearing the enthusiasm in Deirdre’s voice, it is obvious she has managed to convert her passion into her career, the goal we all share. The phrase “do what you love and you will never work a day in your life” has never felt quite so fitting.

For more information or to book your stay at Harvey’s Point click here.