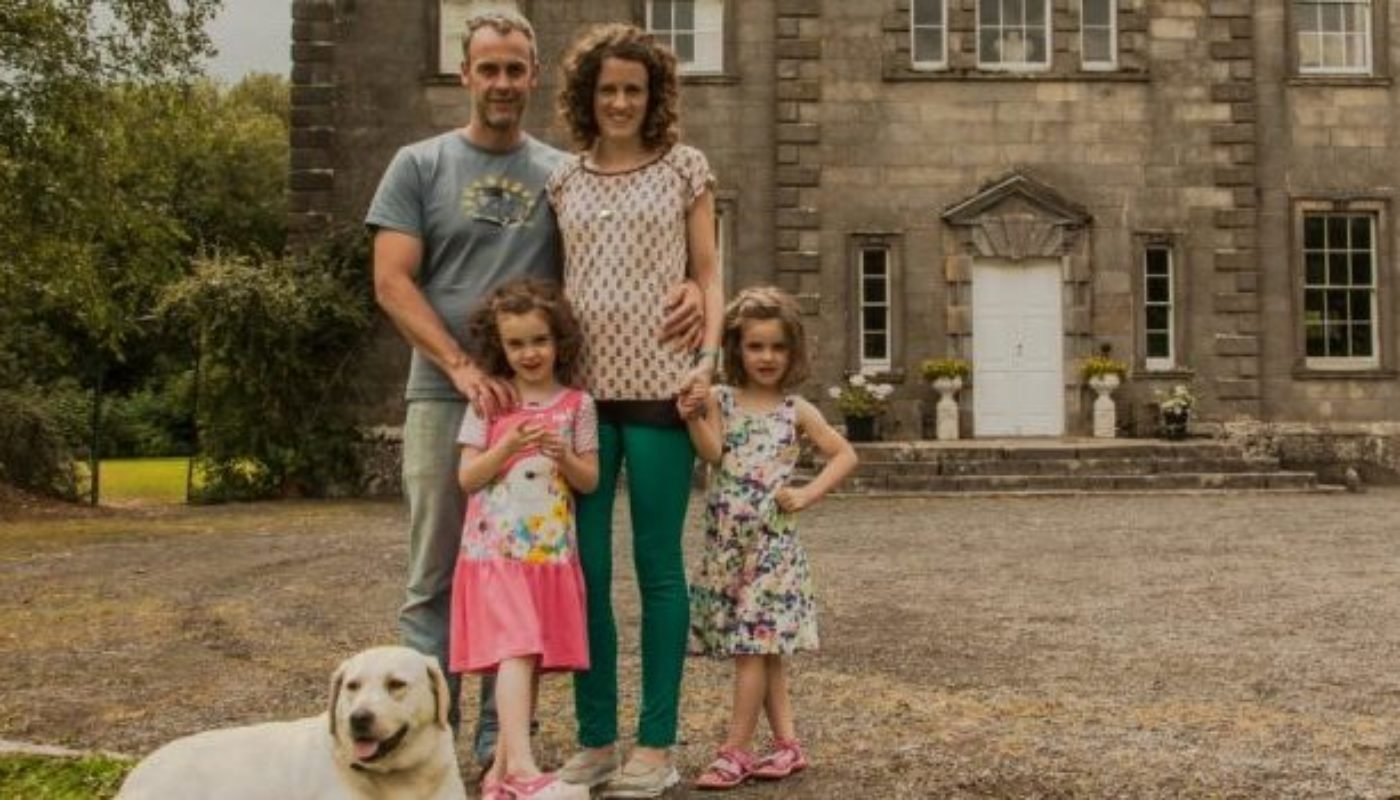 Grandeur without stuffiness is a rare commodity. Pulling up to an imposing three storey palace, and waiting at the double doors to be ushered inside, it would be easy to find the approach to Hidden Ireland’s Roundwood House intimidating. Tucked away in Mountrath, in the Queen’s county of Laois, Roundwood boasts 300 years of history and is wearing its age well.

A prominent member of the Hidden Ireland collection of country houses – neither neatly described as guest houses nor B&Bs, Roundwood exudes an unassuming warmth the second you enter the grand hallway. The sincerity of the welcome offered by owners Hannah and Paddy Flynn is immediately evident as I sit down with the couple to learn more about their home and Hidden Ireland. Hannah’s parents, Frank and Rosemary Kennan, bought Roundwood in 1983, after it had been rescued by the Irish Georgian Society from the fate of demolition. A decade of restoration by the Society followed, after which Hannah’s parents opened the palatial home to guests and lovingly ran it for 25 years ‘as we are doing now, with no major differences’, Hannah explains.

Taking over just shy of a decade ago, ‘just as the recession hit’, Hannah and Paddy have faced challenges over the years, but seem to have found their groove as live-in hosts, a requirement of Hidden Ireland portfolio properties which adds to the unique allure of the country houses.

A common feature is the handing down of the reigns to the next generation, and Hannah feels privileged to have grown up in the idyllic setting of Roundwood. ‘There was six of us, you couldn’t have children running around so we lived outside, no TV, if it was raining we played in the barn or the woods. It is only really looking at our kids now that I realise just how good it must have been,’ Hannah reminisces fondly. ‘I am very jealous of their childhood’, laughs Paddy, and watching their two young girls frolic on the stunning grounds, it’s not hard to see why. The Flynn family as a whole are a major draw to visitors, many of whom return year in year out and consider Hannah, Paddy and the girls to be old friends, a hallmark of Hidden Ireland properties.

Each of the 33 houses in the portfolio displays its own unique character, but the common thread throughout is what sets them apart from all other accommodation options. “The criteria is the houses have to be family run, but also the family has to physically live in the house, which of course changes the atmosphere of a house completely.” You can’t have your own apartment out the back and come in to look after the guests. Because of that, I find it hard to describe the idea of Hidden Ireland sometimes” Hannah muses.

You don’t want people to feel like its a B&B or that they are intruding on your home. On the homepage we struggled with the wording – yeah, we do live here, but we’re not in your face in any way. It’s hard to get across the idea that its a lived in house but they’re not intruding.

The second commandment is that meals have to be provided, and chef patron Paddy tells me ‘all of the houses do all of the above completely differently’ with one shared feature – communal dining. A central part of the Hidden Ireland experience, both agree, they explain that some houses don’t give the choice of a private table, but at Roundwood space is ample so a choice is given, whereas in other houses there is one dining table so everyone sits together regardless. ‘People who get Hidden Ireland come for that aspect, they come to get all excited about who they might be having dinner with that night,” Paddy says. Bar one experience, they laugh, recalling a dinner table with an Obama advisor on one side and a Tea Party member on the other, this unique dining option “works amazingly well.’

Even people who are at first apprehensive, we tell them I think you’ll like it, then they sit down and they’re not sure at first but the amount of times people end up swapping phone numbers, visiting each other and making friends is amazing.

On the unusual communal dining experience, Hannah says ‘Hidden Ireland properties wouldn’t still be doing it 30 years later if it didn’t work” and Paddy adds ‘it has all become super hip again!’ likening it to the recent ‘supper club’ phenomenon sweeping cities like London and Berlin. With the promise of a five course surprise menu nightly, I’m keen to find out more about chef Paddy’s culinary background, as food is the centre-piece of the Hidden Ireland offering. I am wide-eyed when he shrugs – “I kind of fell into it!” Having been a musician for many years, a life in the kitchen was a career pivot to say the least, and Paddy grins admitting “the only transferable skill is being able to stay up really really late!”

When we started we thought we would each learn everything so if one of us was away we could cover eachother but that turned out to be mental, so we decided to carve out different roles for ourselves. I like cooking better than Hannah does, so I just got stuck in.

Despite coming later in life to the food world, the Flynns take their culinary offering very seriously and are constantly striving to improve. ‘We had a woman called Wild Food Mary come in yesterday, she brought all the chefs foraging and the whole menu last night was based around the foraged ingredients,’ Hannah explains, alluding to the common ethos of Hidden Ireland kitchens, where use of local artisan produce is paramount. The menus are designed, daily, to a template, Paddy talks to his local butcher at the start of the week and builds his offering around that. “We didn’t really have the confidence to market ourselves as a foodie destination, but we started going our own vegetables a couple of years ago” Paddy says and he exclusively sources local ingredients to showcase the best of the region on their menu, the kind of dedication you see from the best chefs in the country.

On being foodie destinations, Paddy confirms ‘it has to be a destination thing because these houses are in the middle of nowhere,’ Hidden Ireland properties therefore go the extra mile to be one-stop shops of sorts, particularly for food-lovers, with “good wine lists, commitment to great local food – some of the places make their own cider, they even make gin in Ballyvolane House’ Hannah explains. As for the portfolio, Hidden Ireland properties are all different shapes and sizes, with Roundwood on the larger end of the scale with ten rooms. ‘To make these houses work, the property itself has to be earning its keep, and everybody has a different way of doing that’ says Hannah. ‘We know people who have houses five times the size of this, but they only have six rooms, so they also have to farm and things like that – it really is all hands on deck’, Paddy notes.

Hannah and Paddy are quick to point out that the Hidden Ireland trade is a lifestyle, rather than a job, which is just as well, as Roundwood is one of the few houses that stays open year-round. ‘We actually do very well in winter as our competition is effectively wiped out by default! We get to be the most popular kid in the class!’ laughs Paddy.

Its a different kind of job. It would be heartbreaking if it was a case of going out to work and having to come home and deal with the massive expenses of maintaining the house, psychologically that would be a different thing. Whereas, we are basically just working to keep the house going – the goal is to keep the house and the owners standing!

The couple find the support network offered by Hidden Ireland invaluable, explaining that the group holds their meetings in a different house every time, so everybody gets a sense of each other. Both value it not just as a marketing organisation, but as a way of maintaining contact with people who are doing the same thing, for moral and practical support.

‘It is like a support group, we all have the same issues, most of us are isolated, most of us are not on the main Irish tourist trail, so you talk about things like how you manage on quiet nights, its great to talk to people who know exactly what you’re at and see if they have any tricks you can use too,’ says Paddy.

Despite the all-encompassing nature of running a Hidden Ireland house, both clearly take the trials of tribulations of this unique business in their stride, choosing their three words to describe Roundwood as ‘warm, fun and yummy!’ But how can these properties stand up to their five star hotel competitors, in a country bursting with luxury hotels and resorts?

There’s no comparison to a modern hotel. Some people just like to be anonymous and be in a generic space and other people like character and the visceral elements of life, meeting people, engaging and interacting. Often people don’t get a chance to see these types of houses, this one is 300 years old and unchanged from the day it was built, with all original features, so there’s just so much history and character in every room.

Hannah would contend however, that Hidden Ireland can suit every kind of visitor. ‘Some people prefer the privacy of hotels, but we always can sense when people are looking for a more private experience and we just give them that space, you pick up very quickly what people want from the experience.’

The last word on why you should go off the beaten track and uncover the gems of Hidden Ireland? ‘At the end of the day, guests always say that once you’ve been to a bunch of five star hotels you realise ‘wow there’s nothing unique’, after a while its just the same as the last one, they are generic. But Hidden Ireland houses are anything but.’