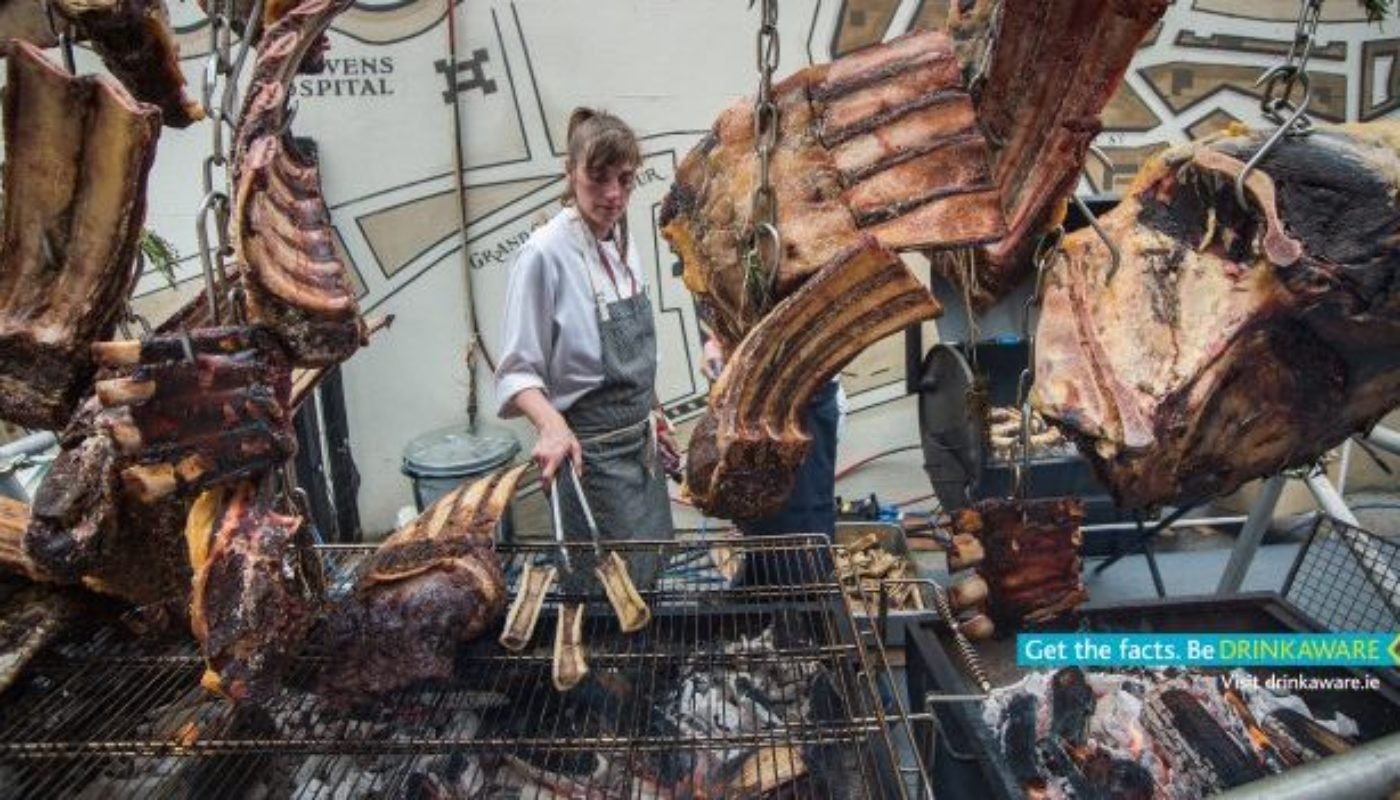 Nothing says summer like the tempting scent of steak flaming over open fire, add a tasty cold beer and you have the perfect day, whether the sun shines or not. If this sounds like heaven to you, you’ll be more than a little excited about the return of GUINNESS X MEATOPIA to the Open Gate Brewery at St. James’s Gate in Dublin from Friday 6th to Sunday 8th July.

This three day beer and food festival is a carnivore’s dream day out with top chefs from London, New York, Ohio, Seoul, Galway and Tipperary taking residency in a very special part of the brewery which is home to beer innovation and experimentation at St. James’s Gate. Get your tickets for this fantastic summer event here. The London based fired-up food carnival that originated in New York is returning for a second year to Dublin after wooing visitors with an irresistible meat feast paired with long-standing favourites as well as specially brewed beers last summer.

Meatopia celebrates the art of open fire cooking, the inimitable flavour a flame imparts and the seductive smokiness only fire can deliver. Never-been-tasted-before dishes will be grilled or smoked over sustainable wood and charcoal, sourced by mesmerising fire craft merchant and traveller Lord Logs. Known for his premium craft butchery worldwide, Maurice Kettyle will supply the best in ethical, premium meat including beef, lamb, pork and chicken.

And the chef line-up is extraordinary. Jonathon Sawyer, winner of the prestigious James Beard award and six-time restaurateur will be flying in from Ohio to create a one of a kind beef shank dish, not to be missed! Liam Kirwan, Head Chef of Mikey Ryan’s in Cashel, will be serving up drool-worthy cuts beef cuts cooked to melting perfection over flame – we’re hungry just thinking about it! Stars of the London dining scene Dan Doherty formerly of Duck and Waffle and Niall Davidson of Nuala will also fire up the grill to put an Irish twist on the celebration.

Great British Menu 2017 winner Pip Lacey will join Singaporean Masterchef Elizabeth Haigh and New York’s Esther Choi, owner of mŏkbar and ms.yoo, to bring flavours from across the globe to the Open Gate Brewery for this unmissable feast.

This year Aniar’s Killian Crowley, the San Pellegrino UK and Ireland Young Chef of the Year, will man a grill with the treasures from the deep, showcasing the delights of flame cooked fish with unique dishes specially designed for GUINNESS X MEATOPIA, so you can indulge in the ultimate surf and turf courtesy of Ireland’s hottest young chef. The undeniable match made in flavour heaven of smokey meat and beer will be on show, as the dishes have been perfectly paired with long standing Guinness favourites as well as experimental beers created especially for the event. The beer sommeliers at Guinness (yes, that’s a real job!) have created Salt & Pepper beer, a Rhubarb Sour, and a brewery first, and a Caramel Ale to pair with the delicious meaty treats.

In true Meatopia style, festival-goers can get stuck into conversations at the Meatopia Cutting Room stage featuring everything from Korean butchery demos and live fire techniques to flavour discussions and question panels with a mix of individuals and collectives from the worlds of beer, food, and fire and flavour. Those looking to brush up on their grill skills and learn more about the world of open fire cooking can soak up knowledge and advice from the experts on The Cutting Room stage.

Lord Logs will share his mesmerising stories of fire craft, there will be butchery demos so you can become a pro at home and there will be plenty of opportunities to get up close and personal with the international chefs, beer sommeliers and brewers so you can get the answers to all your burning questions.

Tickets for this year’s GUINNESS X MEATOPIA with the very best high quality, ethically-sourced food and bold tasting beers are now available at www.guinnessopengate.com/meatopia – snap yours up now before they sell out!