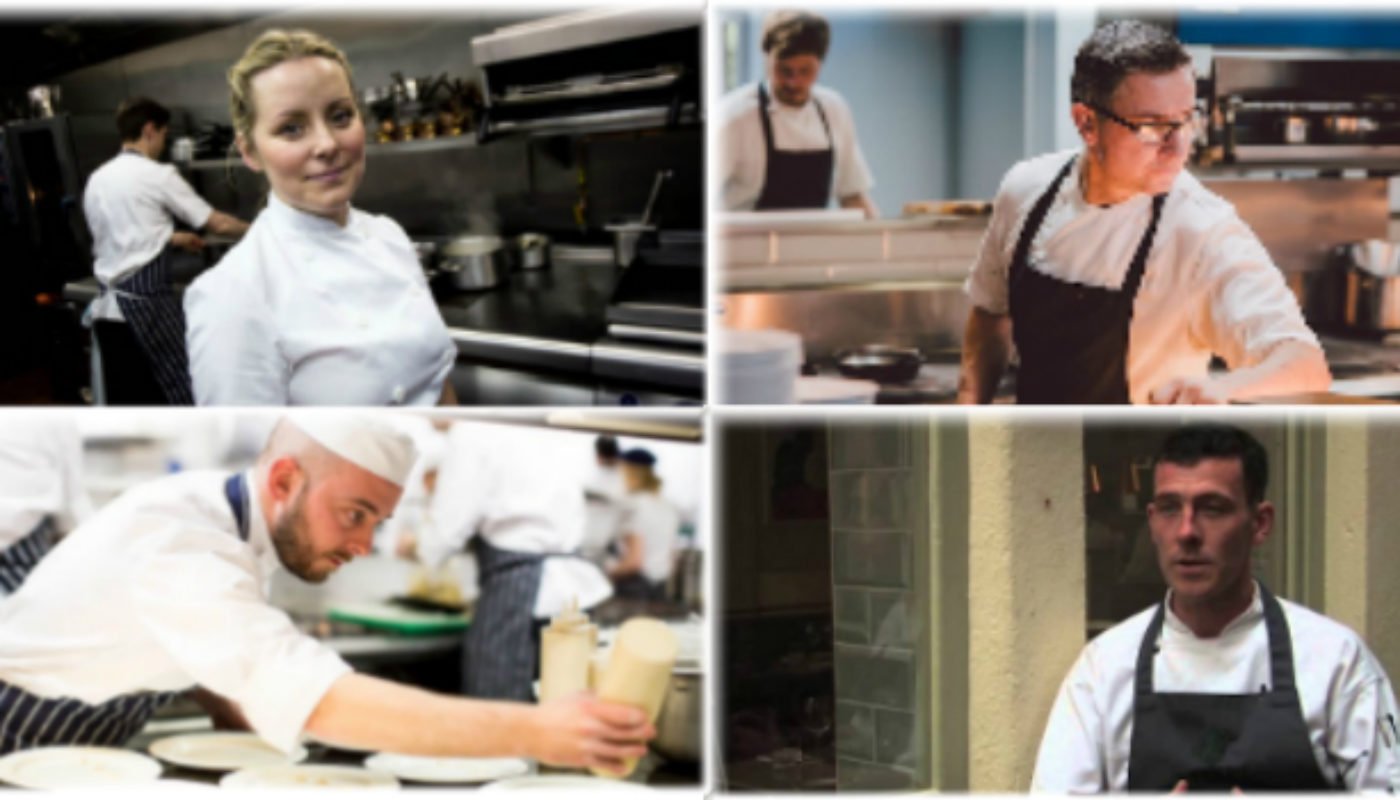 Behind every great chef is dedication and passion. Ask any experienced chef, ‘what’s the most important thing you would say to a young person starting out?’ and their answer is generally the same – you have to love it. “L’Ecrivain, without a shadow of a doubt, completely shaped me. It was my first kitchen to work in and I was put on pastry. I learned pretty quickly you need to be clear about what you like and don’t like because the kitchen will put you where you’re needed. I never wanted to be on pastry at all, but it was like a blessing in disguise because I got to work with a woman called Mary McEvoy. She taught me so much, I can’t even put it into words. She basically put me onto a crash course and taught me anything she knew and anything I wanted to know.”

“Derry Clarke was on the pass and Seamus Commons and Stephen Gibson were also working there at the time. Having these three brilliant, amazing chefs in the kitchen with me when I was training was an incredible time. It was a wonderful kitchen to work in and I am really thankful to have worked there, to see the level of respect shown to me and each one of us. When I moved to London things were so different.” “I worked with Shane Osbourn in two-Michelin starred Pied-à-Terre. Shane is probably the chef that shaped me the most. I was the first female chef to work every section in that kitchen. Shane was really bad at communication, which meant that he was really bad at keeping staff, which meant that he was in the kitchen 24/7. It was brilliant for me because it meant I got to ask every question I wanted, everything I’d ever wondered about every ingredient I was touching and I got to ask the person who really knew the answers.

I also learned from him what I didn’t want to be. We got on very well and he respected me greatly, but on the other hand would disrespect me greatly. I didn’t care at the time I was there to learn and Shane taught me so much at such a high level, about systems, flavour and balancing things and encouraged me. I thought he was so incredible and brilliant at his job. He’s in Japan now and the last time I saw him was before he went, I went to see him as I wanted to thank him.”

Gavin McDonagh, Head of Development for the Dylan McGrath Group “Derry Clarke was my mentor when I was an apprentice. He put me through the Young Chef of the Year competition and I won it. Derry is brilliant. When service was done, no matter what you did, even if you messed up on a monumental scale, you started the next day fresh. When I was with him first there was only four of us in the small basement kitchen of L’Ecrivain – before he expanded up to the current location – we would do challenges to see who would get a dish on the menu. Derry never had a problem with getting ingredients in for us to try or giving his time to teach you.”

“Not only Derry though, Sally-Anne was great to me too. When I went through the Young Chef of the Year competition, you had to do an essay and it wasn’t my strong point, so Sally-Anne would help me by proofreading it and mentor me through it.” “In Restaurant Patrick Guilbauld, Guillaume Lebrun was also a brilliant mentor and gave a lot of his time to me. I did the Young Chef of the Year competition twice, once while I was in Restaurant Patrick Guilbauld and that year Neven Maguire won it. Guillaume would come in on a Sunday to train me for the competition. For someone to give their time up like that on one of their days off after a 70-hour week, I have nothing but respect for. Guillaume is a gentleman, very quiet but ultra professional. There are certain techniques and dishes I learned there that I still use to this day.” “When I left Ireland to go to London, I initially worked for Bruno Loubet in Bistro Brunot in Soho and L’Odeon on Regent Street. He is still to this day one of the most talented chefs that I have been lucky to work with. After a year I went to work for Gary Rhodes at The Greenhouse and his sous chef was Wayne Tapsfield.

He is probably the chef, out of the people I have worked with, who has the largest repertoire of food, just an unbelievable knowledge. He was an incredible mentor. He was the one that really defined where I was going in my career and really pushed me to get the best out of me… He gave me the tools to do the job and showed me what ability was inside me. As a result, I went as a sous chef to Pierre Koffman in La Tainte Claire.”

“Pierre Koffman is truly a legend. I felt really privileged to be there. I spent two years with him and I gained a lot from him… it was a two Michelin starred restaurant, but we were doing 100 covers in a night! I always said that if you could work at La Tainte Claire you could work anywhere. It was a hard kitchen to work in, in the way that it was physically demanding. You really find out about yourself in situations like that and what your ability is.”

“I was with Richard Corrigan then for 12 years, we had Lindsay House then Bentley’s, London and Dublin, and Corrigan’s of Mayfair. I think what I learned with him was running multiple establishments. I became a chef director/partner of the business, so I found that at that board level I got into the real business of running it and when you get to that stage, cooking is the easiest part of the job.” “My 20 years in London has brought me full circle now and with my own restaurant I use everything that I learned over there. I have young guys in my kitchen who are where I was when I started. You have to come into this profession for the right reasons. You can learn the skill set, but if you have that unwavering passion for food then the rest of it will come.” “Noeleen Boyle was my head pastry lecturer in college in Killybegs. She really took me under her wing. I was constantly pushing; I was that annoying person in class always asking questions! I didn’t really look at her as a mentor until afterwards.

What I was most grateful for is the respect she gave us for the ‘originals’ – the mother recipes and the basics that you needed to build on. She wouldn’t let us put our own twist on something until we got the original right first. That has served me well. If you know how to make a good anglaise or sponge, you can tweak it and change it. I am indebted to her for that.”

“Stefan Matz was someone else who really influenced me in a totally different way later on in my career. I was running the pastry section in the g hotel in Galway and Stefan was executive chef of the hotel group at the time. He wasn’t the type of chef to come in and shout at us or start demanding things; he would stand back and that almost made you push yourself even more.”

“He would give you feedback on what changes to make, but he would leave it at the bare minimum. He was a different type of mentor in a way. You would always want to impress him, to make him proud with the work you were doing. With Stefan it was all about the flavour of food and the ingredients we used. He would say, ‘yes that looks amazing, but what does it taste like?’ That was definitely something I took from him.”