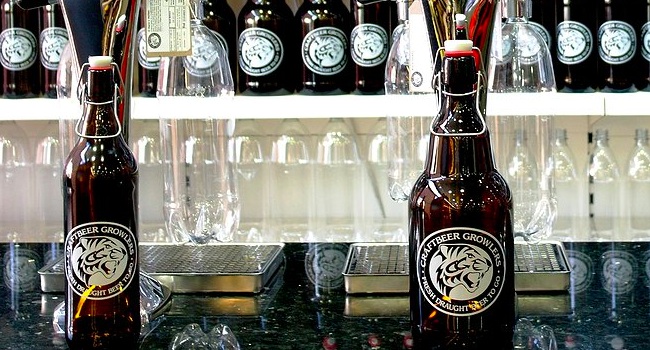 What sums up to me the Craft Beer Revolution in this country is the choice and range of craft beers available to people, both in growing numbers of bars, but in an ever increasing amount of Off Licences. It seems our consumption of alcohol habits are changing, both in where we purchase, and what we are consuming. We are importing a lot of great beers from overseas, in turn our brewers are starting to produce their own take on these beers, and we’re having great fun on on this journey of discovery. One of the things that has come along almost under the radar is the humble Growler.

What is a growler I hear you ask? it is a reusable and refillable drinks receptacle. Just Like this :

Growlers have been common place in the US for so long that i’m actually surprised it’s taken this long to reach this side of the Atlantic. So generally speaking a growler is a glass bottle with a swing top or screw top lid that keeps your beer fresh and tasty. The way it works is you literally go in, get your fill, seal the lid, pay and go. You get to experience Draught Beer in a takeaway vessel.

Now, these are not the first growlers to descend on Dublin, indeed that honour falls to the venerable Brew Pub, JW Sweetman who have been selling growlers for nigh on a year. They’ve recently been followed by those scamps at Galway Bay Brewery who have 10 pubs between Galway and Dublin. What’s the big deal I hear you ask? Well while these two places do the growlers with some distinction, the beer has to be consumed ideally in less than 24 hrs to get at its peak condition. Otherwise Beer’s mortal enemy oxygen, affects the beer and makes it less pleasant than it should be. So how is this all different? Well, its down to the system they use. I first met Kevin at the Alltech Brews Festival earlier this year in the Convention Centre, he had a demo unit there which instantly impressed me. It’s able to take four different beer lines and serve into Growlers. But it doesn’t just stop there, the Pegas System uses CO2 to purge the Growler of any oxygen before filling and clears the line of any remnants of beer so there is no mixing of the beers. It seals in snug, and the beer fills down the side, with minimal frothing (which is good) and as it gets to the top a little foam is there to create a CO2 buffer. This allows the beer to stay fresh for up to 60 days.

Now, i’ve not had the willpower to get a growler filled for that length and it to remain intact in the fridge. But I have had one in full for more than a week and it still tasted fresh to me. I’m excited to see this come in and bring even more choice to craft beer drinkers countrywide. It’s quite a spectacular looking set up, and works quite simply. You buy a glass growler for a once off fee, either 1L or 2L, or you can buy a PET plastic one way bottle which would be perfect for festivals, or bringing your favourite craft beer to a party.

So what are the benefits, for a consumer, its the opportunity to get draught beer and bring it home, but also there are some beers that don’t get bottled or canned so you get to try them in the comfort of your own home – think Metalman Pale Ale, it will be canned next year but is currently not available outside a pub. For brewers, well at the moment there is only one system in operation, with more to follow soon, but they will be able to get their Draught product to more people as off licences in general are a bit more willing to try something new, especially if they already stock the bottles. For Off Licences themselves, it is another unique opportunity to offer their customers more choice to an already wide range of great beers.

So where can I get my fill? Currently Carry Out Off Licence in Tyrrelstown Dublin 15 is the only outlet at the moment. They always have four through the pegas system, and another two through the plastic bottles system. Plus they advertise it on their Twitter & Facebook pages, giving you the price for a 1 or 2 litre fill. You can see what is pouring at this link Carryout Tyrrelstown, If you want to keep an eye on where there are new locations added please visit Craft Beer Growlers to see where they will be. If you are interested in getting more information on the Pegas System you can get more information by following the above link

Now, what are you waiting for, go get your growlers filled!

Kevin & The team have been kind enough to give us a Craft Beer Hamper for one lucky reader which will include a complimentary Growler fill. To enter please enter your details below.