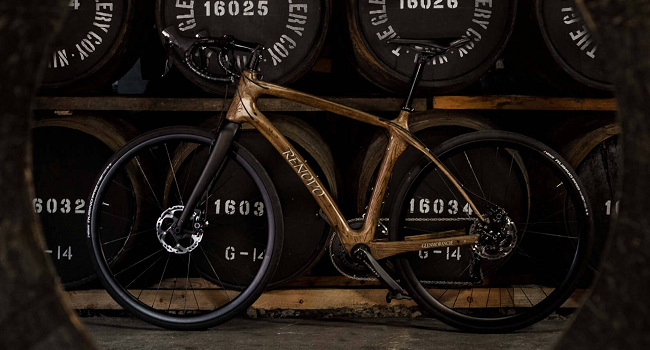 Renown Scotch producer Glenmorangie has teamed up with Oregon-based bicycle manufacturer Renovo and the result is the world’s fist bike made from recycled whisky barrels, part of the distiller’s Beyond the Cask initiative, which previously saw the launch of stylish sunglasses. The bike, named Glenmorangie Original, is visually appealing and sustainable. Renovo specialises in wooden frame bicycles that merge function and design and as described on their page, “designers took inspiration from the shape of Glenmorangie whisky cask staves, with the downtube and top tube echoing the trapezoidal shape of the stave and the arcing curve of the cask.” Each frame of this limited-edition bike is made from 15 cask staves and for the bike connoisseurs out there, let us tell you it’s more than a smooth, pretty surface: it weights less than 10 kilos and it’s equipped with state of the art features including a “Shimano Ultegra shifting and braking systems, a full-carbon thru-axle fork, lightweight and aerodynamic Velocity wheels and a lightweight and comfortable FSA cockpit.”

The bikes are delivered nearly fully assembled and everything you need for the final touch is included, which shouldn’t take more than 15 minutes to set up.

Ken Wheeler, Renovo’s founder said: “We are so excited to be working with Glenmorangie, a distillery with which we feel such affinity.”

“Renovo is dedicated to honoring wood in the creation of our bicycles, because of the materials superior engineering properties, ensuring a smoother ride. These beautiful machines, uniquely fashioned from Glenmorangie’s staves, will inspire anyone with a taste for innovation to enjoy fine quality bicycles”, he added.