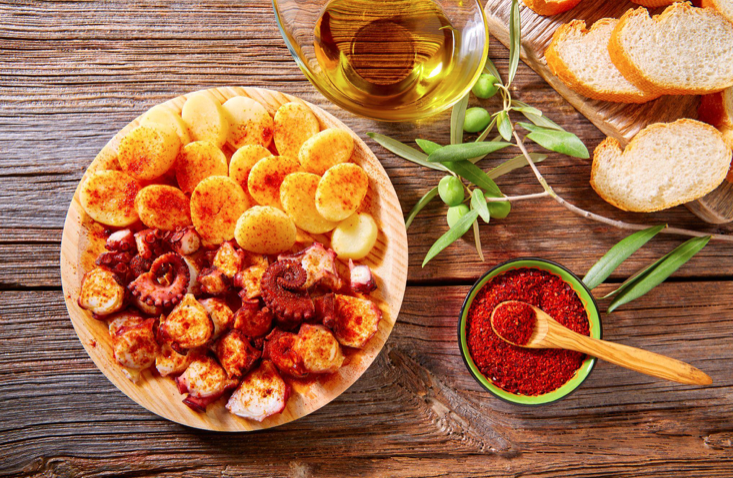 Food knowledge from Galicia and the Camino de Santiago, Andalusia, the Basque Country and Catalonia

Would you like to know more about Spanish foods like the Galician octopus dish pulpo a feira, the Basque fish stew marmitako or the Catalonian sauce romesco?

The finer details and in-depth knowledge of Spanish cuisine will be covered in an enjoyable online workshop held by the Cultural wing of the Spanish Embassy, Instituto Cervantes Dublin over which runs every second week starting from the 15th of June for eight weeks.

This workshop will take you to four regions of Spain to learn about regional cuisines, customs, cultural heritage and the contrast between different languages.

Attendees will also get to know some contemporary food literature and restaurants and discover the influence of Latin America and North Africa on historical and modern cuisine. Through four one-hour sessions, the food specialist Blanca Valencia will guide you on a virtual trip to Galicia (and the Camino de Santiago), Andalusia, the Basque Country and Catalonia, to delve into gastronomy, places, monuments… and much more.

Contents of the course:

Blanca Valencia is a specialist in Spanish gastronomy. An Economist by training, Blanca’s experience includes Books for Cooks (London), elbulli and El Alambique cooking school (Madrid). She has worked for a specialty food importer in Chicago and has collaborated with the Spanish Commercial Office in Dublin and New York. Her classes combine cooking, history, economy, art and pop culture. She has presented various gastronomy series at the Instituto Cervantes in Chicago and Dublin. Blanca is the co-host of Spice Bags podcast and is pursuing a Masters in Gastronomy at TUD.

Where: Instituto Cervantes, Dublin online (€40 for the course)