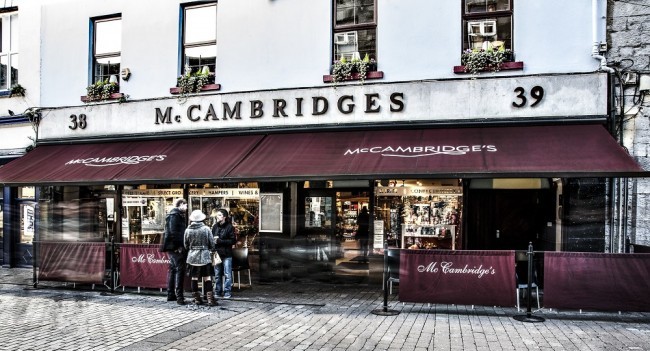 Anyone who has an interest in food and has visited Galway will know McCambridge’s. The large store on Shop Street has been at the heart of Galway’s food culture since its foundation by George McCambridge in 1925. Over the last 90 years the shop has evolved from a pub and grocers to a renowned food emporium. It returned to its hospitality roots with the opening of the upstairs restaurant in 2012. The ethos of McCambridge’s has remained the same throughout its history, providing the people of Galway with the best in local, Irish artisanal produce.

It is also a remarkable business in that it has remained family owned and ran for nearly 100 years. Marketing manager Natalie McCambridge is part of the third generation of the family working in the store and she is encouraging the next McCambridges to join in the legacy. She takes great pride in pointing out a young man working on the till who is the first of the fourth generation to work in the shop. Her own son will be called up in the summer. For Natalie and her family, the business connects them to the local people and provides a social forum for shoppers, just as it did all those years ago.

When this opened in 1925 there was the pub and there was the shop so they’d come in and have their couple of pints of porter and whatever else. It was very much a social centre. Shopping wasn’t just about coming in like going to the supermarket and filling up your trolley, it was about coming to a place for the chat and it’s become like that in here again. 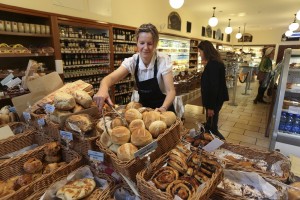 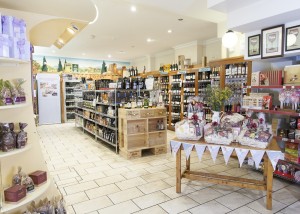 Natalie thinks this marks a turn for the people of Galway, they are less interested in pubs now and more into the growing food scene. People are supporting local and as a result they are enjoying an increased familiarity with independent food businesses and families like the McCambridges. Since his retirement, Natalie’s father Pat is still a regular presence in the store, coming down to chat to all the customers and keep an eye on things.

Pat is going to be taking part in the Galway Food Festival over the Easter Weekend 24th-28th March where the theme is 100 Years of Irish Food. Staying true to that he will be giving a talk and archiving old stories of Galway’s food history and traditions with other culinary stalwarts Ray Colleran and Martine McDonagh. Natalie says it’s very important to document these stories in case they get lost in the changing landscape of food and the food festival is leading the way in terms of protecting Galway’s culinary heritage.

Natalie really admires the festival committee for their drive and passion and credits them with their organisation. “A really good thing about the food festival is there’s an awful lot of free events so if you’re there with the family there’s stuff that you can wander around to. It’s not that expensive to go along to some of the talks which is good, especially if you have a family of three or four kids coming up behind ya.”

McCambridge’s is fully committed to the festival with several events taking place over the weekend. The highlight is a 1920s prohibition themed evening with a 5 course tasting menu, jazz music and swing dancers. The team are fully embracing the theme and will all be dressing up. Assistant Manager Matt says they wanted to create an event that celebrated the theme which is totally fitting for a company that has seen the evolution of Irish food first hand.

We were established in 1925 so it’s going back to our roots. This was originally a pub slash grocer so we wanted to ring true to our origins as well. Also prohibition came to Ireland in the 1920s and with 100 years of food being the theme of the food festival we wanted to kind of collaborate with that. We don’t want it to just be a dinner, we want it to be a bit more theatrical, a bit more of an experience.

The event is in association with Teeling Whiskey, their spirits will appear in each of the 5 courses in either a sauce, a smoked salt or a gravy. It’s another chance for McCambridge’s to showcase a great Irish producer, something they are consistently doing. 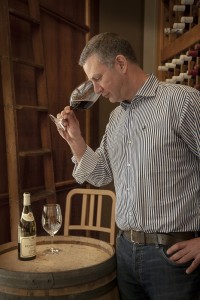 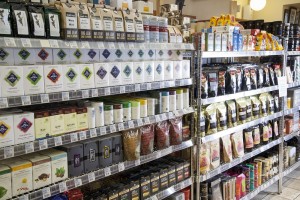 General Manager Luke says they run events all year round to promote the Irish producers that they work with. He also organises in house tastings for staff and customers a couple of times a week. “They’re enjoyable, they educate our staff and they provide the chance for customers to see what we’re doing and to be able to taste. No one’s ever done a tea and chocolate tasting so doing interesting things like that is fun.”

Luke maintains that this level of staff training is vital as their customers are becoming increasingly discerning and insisting on a moralistic manner of production. “People have travelled more, they’re looking for that better stand of product, they’re looking for products without additives that are made correctly. They don’t want to be putting lesser quality foods in their mouths so they expect better quality food.”

McCambridge’s has always prided itself in service and Luke is determined to maintain and encourage that. “All our staff are very well trained and we know all our products intimately. We try to add that personal service, that personal touch is really important to us. Everything that comes from the shop is fully trained, all the staff talk about it, all the staff taste. We’re constantly working on that so we can pass that knowledge on to customers.”

The wine department is carefully curated as befitting the site of the first off licence in Galway. McCambridge’s prides itself on the quality of their selection and as they are importers themselves, they have access to small independent brands that you wouldn’t find in supermarkets. As a result they have a very specialised and individual range. 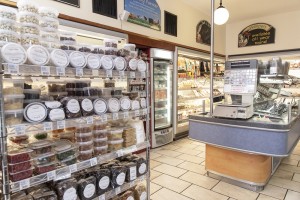 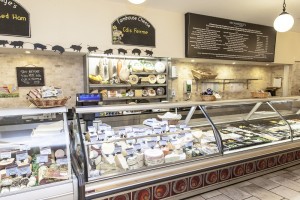 Their dedication to Irish products manifests in their range of whiskies which are Luke’s favourite products. “Irish whiskey is growing exponentially. We would be well known to get those particular, more unique whiskeys. We have bottles of whiskey worth up to €10,000 that we sell.”

In order to ensure they have the best products and consistent standards in all departments, the team at McCambridge’s have created great relationships with their producers. Where they aren’t stocking the best local produce from companies like Sheridan’s, Lismore, Skelligs and Teelings, McCambridge’s have created their own range of products including jams and preserves. Ponaire coffee in Limerick even roast them their very own blend of coffee. Their homemade ethos is integral to their thriving deli department and in house restaurant. The aim of the menu is to reflect and showcase what is sold downstairs, paying particular attention to Irish artisan products. The restaurant is actually the old living room where Pat McCambridge grew up so it is very personal for the family.

Luke and the team are very proud of the success of the expansion. “We did this through a recession. We used local builders, local designers and it was a success from the day it opened. It is also important to them that they are supporting the local community; the opening of the restaurant grew the staff from 32 to 64 with that figure rising to nearly 100 at Christmas time.”

Their range of artisan chocolate means Easter will be another particularly busy time for them, especially with the Galway Food Festival taking place. Luke says it a great vehicle for local businesses and the growing food culture in Galway.

The food festival is a fantastic event, it’s growing bigger and bigger every year and it brings so many people into town. The standard of everything in Galway has improved over the last 3 or 4 years so businesses like us have to keep on pushing so we stand at the front of that. We’re always pushing each other and looking for higher standards and tourists and people coming in to Galway are recognising that, locals are recognising that.

McCambridge’s will be celebrating 100 years of Irish food at this year’s festival which is fitting as their business has undoubtedly played a large part in the food culture of Galway through most of that. With the increasing success of the festival, the food scene in Galway is thriving and the team in McCambridge’s are looking forward to the next century where they will continue to lead the food movement there.

For more information about the Galway Food Festival and a full list of events, visit the website here.