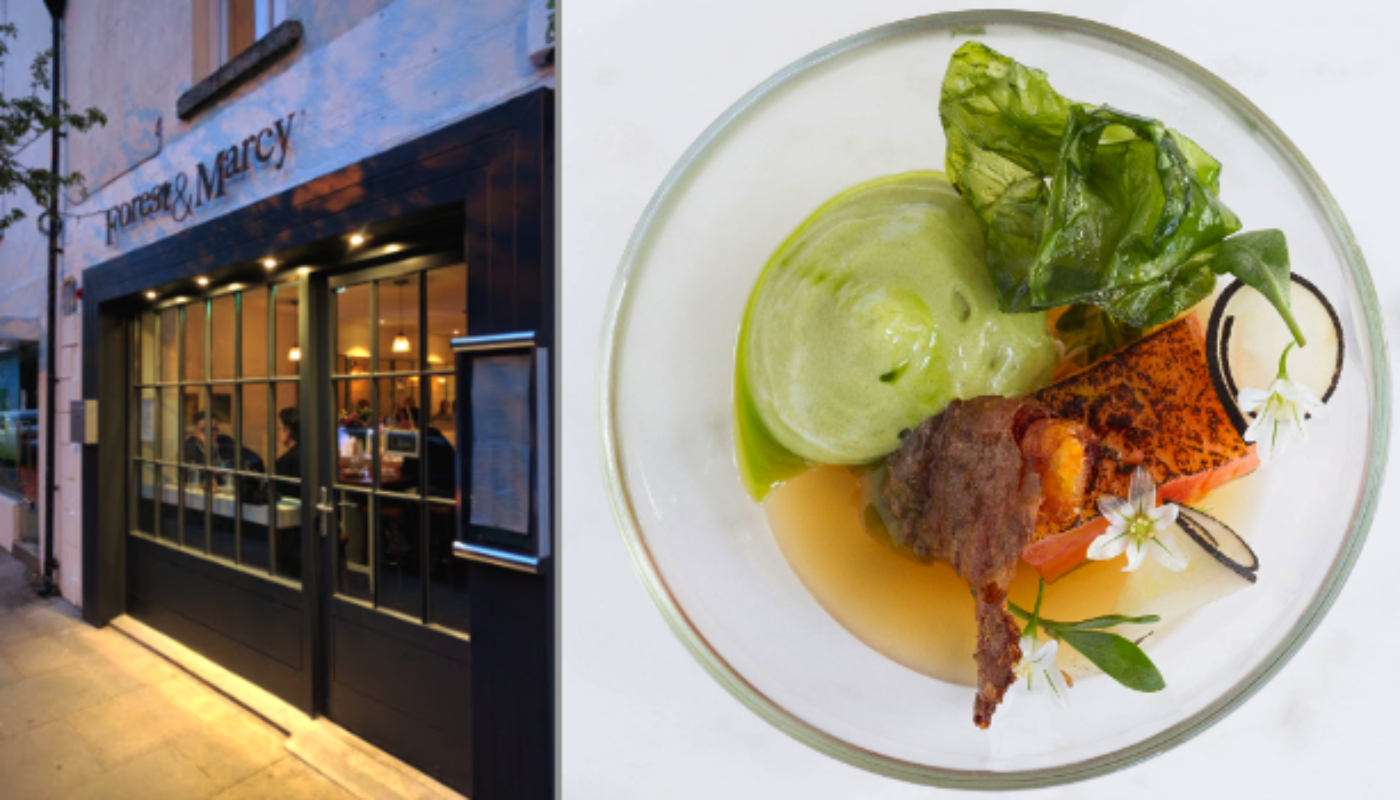 They say spontaneity is the spice of life, but personally we prefer a bit of planning. However, as we discovered last Thursday, Dublin’s newest dining hotspot Forest & Marcy is not much of a fan. When trying to book a table we expected there to be the possibility of some difficulty in securing a booking, as there has been a lot of anticipation in the run up to their opening just over three weeks ago. The baby sister of the highly respected and much-loved Forest Avenue, it appears does not take any bookings, it’s walk ins all the way.

We have to be honest in saying that this is a major bugbear for us, as most people don’t want to trek over to Leeson Street Upper unless they know they have some chance of actually sampling some grub. However determined to get our hands on some of Chef Ciaran Sweeney’s dishes, a babysitter was booked and we took our chances. Luckily for us we managed to get in early and grab one of the few remaining seats.

The use of space in Forest & Marcy is quite a feat; narrow and galley like in shape, all the seating is high-stooled, thankfully well-cushioned, with the majority of seating along a marble dining counter, giving it a tapas like atmosphere. The design is slick but in an understated way, like the popular kid in school who’s cool without even trying. Seated at the counter we had a bird’s eye view of all the plating up from Paddy Arnold, another talented acquisition John and Sally Wyer have managed to nab. You’re in such close proximity to all the action that dining in Forest & Marcy almost feels like you are part of the experience, inviting you to interact and ask as many questions as you like. Our neighbours were two guys who had travelled all the way from the States on a business trip, and had come on the suggestion of a colleague who had visited the previous week, and declared Forest & Marcy was the “most awesome dining experience he had in Dublin”, a pretty good testament after less than three weeks being opened.

The menu is based around small plates and sharing, however it must be pointed out that these “small plates” are unlike most you will experience. These are top quality, well thought out, and unique. Prices range from €4 up to €18 for one of the larger plates, such as the lamb, artichoke, anchovy and samphire. The have kept to a choice of four small, medium and large dishes from each section, with an option of a Chef’s choice sharing menu for €39pp. The only thing that will rival the food here is the quality of the eclectic wine list, it may not come cheap with prices starting at a tenner a glass, but almost every bottle, bar one or two screw caps, are available on the Coravin; meaning you can really push the boat out and try something unique by the glass, or even by carafe.

To be honest Forest & Marcy really is a little Aladdin’s cave of surprises, from the relatively short description on the menu it’s hard to envisage what may arrive, and then before your eyes the magic happens and simple ingredients seem to come alive on the plate. There is a strong Irish contemporary theme all the way through the menu and our first dish couldn’t be any more so, freshly baked, warm Fermented Potato Bread (€8) with bacon and cabbage like Mammy never made, much to our regret, with a uniquely crisp texture. The potato itself is fermented for ten days and judging from all the curious looking jars above the kitchen, fermenting is a big passion for Sweeney. As our two medium-sized dishes were being plated up meticulously before us, we were impressed at how at ease the staff are considering they are in such close proximity to each diner and every daub of sauce is being scrutinised in an admiring way. It is this “fly on the wall” feeling that sets Forest & Marcy apart from very other venue in Dublin at present. There are open kitchens elsewhere, but here they are baring their culinary soul for all to see. Sweeney carefully presented a wooden box filled with smoking hay and a morsel of delicately Smoked Salmon (€12) which had been cured for 12 hours and then placed in a water bath for 15 minutes to enhance the texture. It was left to the last second before being transformed by Arnold into a striking dish of colourful radish shavings, and aromatic lovage puree, with a careful sprinkling of horseradish powder, which added a tasty little zing to the salmon. Our second “starter” was a taste of summer on the plate with thick chunks of colourful Varieties of Tomato (€12), delicately plated pickled and roasted courgettes, topped with two slices of meltingly tender guanciale and a minute addition of goats curd, made a welcome appearance over the usual goats cheese offering seen on too many menus at present. By the time the main event arrived the restaurant was full to capacity, with one of the country’s most well-known food critics only seats away from us, yet still the service remained calm and consistent. With the first bite of our Cod (€16), peas, and wafer thin asparagus, we were hooked. Seared deliciously the fish fell apart with barely the slightest graze from the fork and formed and ideal partner for the lofty coconut base. There is something about the mere mention of Suckling Pig (€18) on a menu that conjures up decadent thoughts, it’s a rich, meaty dish that should be devoured in seconds, but not here. Instead a sea of greens arrived with the pork cleverly disguised as the most refined cut imaginable. A light drizzling of pitaschio pesto gave an individual flavour to the gnocchi and broad beans, turning this pauper into a prince in one bite. Although the house cured charcuterie and cheeses boards were more than appealing, we had seen the Lime Leaf Custard Tart (€8) being devoured by the couple next to us so there was no contest. The tart was gently torched and caramelised on top, presented with a divine strawberry & hibiscus sorbet and two shards of sweet meringue, paired with a silky Late Harvest Reisling (€10) this was absolute heaven. The custard tart could never be outdone but our Sheep’s Yogurt Panna Cotta (€8) made an interesting alternative, not often you will experience a dill sorbet, but surprisingly it worked brilliantly with the caramelised white chocolate and almond nuggets. We nursed the rest of our carafe of beautifully blended Claus Preisinger, Kalkundkiesel (€21.50) and were in agreement with the couple next to us that Grainne our server on the night, who is formerly of Etto, was exceptionally warm and pleasant with an excellent understanding of the menu and in particular the wines. When exceptional hospitality matches exceptional food you have stumbled onto something very special.

We had walked in to Forest & Marcy miffed at the no bookings policy, but by the time we left, quite a few hours later we both agreed that having it any other way wouldn’t work. Forest & Marcy is not about conventionality, it’s all about breaking all the moulds and it is the most exciting addition to hit the Irish restaurant scene in some time.