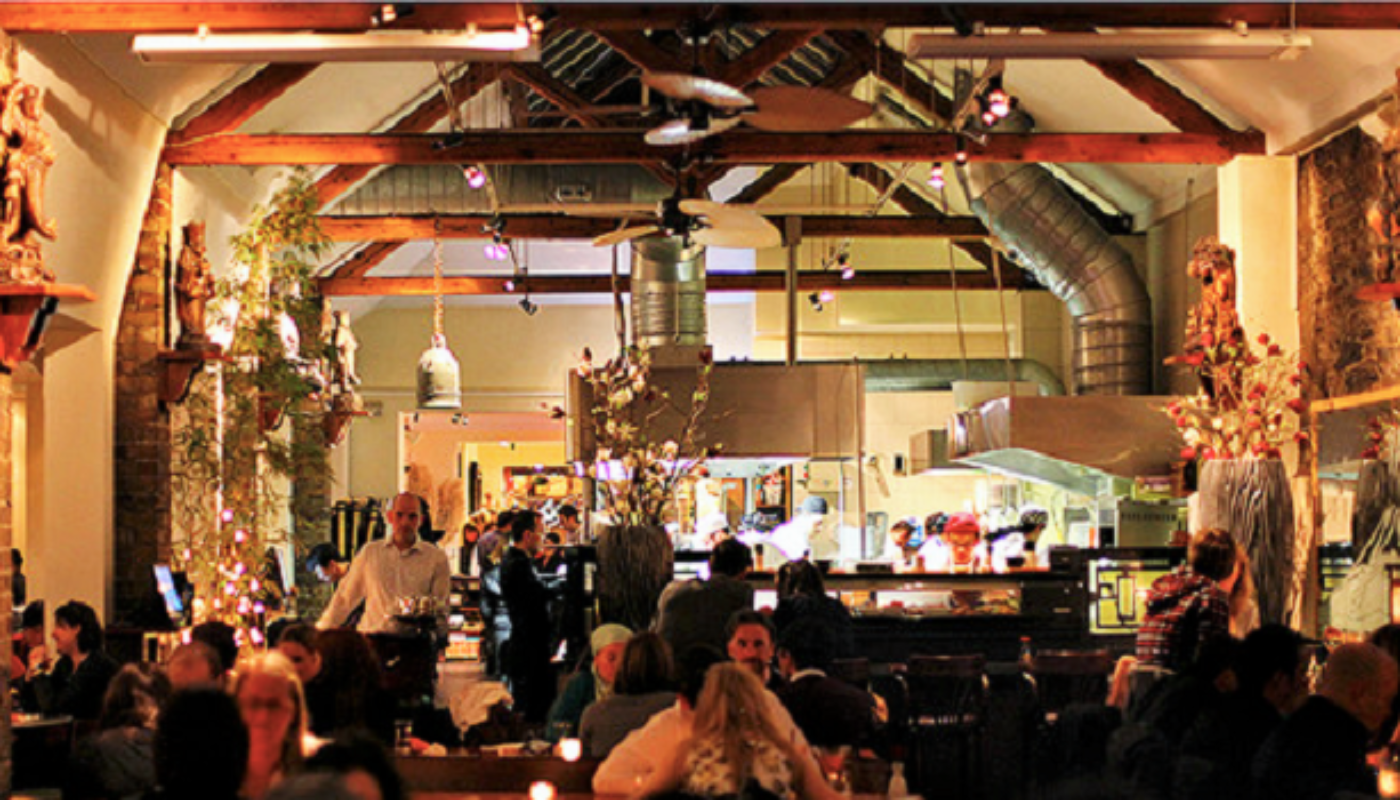 Home » For the Sake of Japanese Flavours! – Yamamori Sushi Review

For the Sake of Japanese Flavours! – Yamamori Sushi Review

I think that AA Gill, the famous Sunday Times food critic, was being a little unfair when he said that Japanese food ‘tastes of hunger’. No doubt he was being deliberately provocative, taking a side-swipe at some of the more superficial restaurants of London where stick-thin socialites pick at overpriced yet bland imitations of Japan’s cuisine.

I’m doubting AA Gill’s judgement because, after visiting Yamamori Sushi on Dublin’s Ormond Quay, hunger is the one experience you’re guaranteed not to walk away with. Nor, in fact, is it in any bland or overpriced – in fact I’d a cracking good time, and would gladly bring AA there next time he visits these shores.

Given the bustle and noise of Ormond Quay at seemingly any time of day, you’d be forgiven for maybe not spotting Yamamori Sushi in passing. But looking to the left as you cross the Ha’penny Bridge northbound, the restaurant’s distinctive black-and-red livery is easily identifiable. The building is tucked into a corner of sorts, perhaps in a nod to the Japanese modesty and deference.

But stepping inside, meek it is not. The atmosphere is decidedly clubby, with a low-key yet thumping soundtrack and a cocktail bar with swirling psychedelic lights cast upon a shiny relief of two ancient Japanese faces.

The restaurant itself is more cavernous than expected, rising high and deep into the building. On the left is an open kitchen, with the chefs going about their business behind a plexiglass divider, giving a street food feel. Straight on are benches for the communal experience common in Japanese restaurants, while to the right is a section containing more conventional tables and chairs.

The whole effect is busy and energetic, but the ever-polite wait staff smooth the path to your table and are unfailingly polite throughout, casting a soothing equanimity over the visit.

The menu is extensive, and the Japanese newbie may need some guidance. It also states that, “Traditionally, there are no starters or main courses in Japanese cuisine. Dishes may vary in preparation time. Your dish will be brought to your table as it is cooked”. All this seems perfectly sensible to me, especially given the diverse and freewheeling nature of the choice on offer.

In the interest of a tasting representative sample of the expansive menu, we spread our choices across a range of Japanese specialities. First to the table was Pork Gyoza (€8.95), by far the best I’ve tasted in Dublin. The six parcels contained the sweetest and juiciest pork I’ve had in any dumpling, with semi-steamed, semi-grilled parcels giving fantastic textural contrast.

The rest of our order all came out at once, meaning much shuffling of tableware to accommodate all the dishes. This being the “Sushi” outpost of the Yamamori empire, it would have been remiss of us not to try out the eponymous dish. But given the vast selection we plumped for the Small Sushi assortment (€9.95), five pieces selected by the chef on the night. I might normally have chosen the more considerable, twelve-piece Large Sushi (€23.00), but I didn’t bring my stretchy trousers on this particular night.

The five pieces of sushi, which all turned out to be nigiri as it happens, were beautifully laid out on a wooden board and presented in what looked like a garden theme: watercress played the part of grass, while, cutely, the wasabi was shaped into a toadstool and slivers of ginger were delicately arranged into a rose.

There was the ubiquitous – but always welcome – salmon (sake) and tuna (maguro) to begin proceedings, each being perfect examples of simplicity, purity and freshness. Next was the rather more elaborate construction of crayfish & mayo (zarigani gunkan), a creamy and juicy affair wrapped in cucumber and topped with roe, with the former giving a refreshing counterpoint to the meaty filling.

There was then a brief respite in the form of a simple but delicious sliver of seabass, before the chef’s selection finally finished on a robust, umami-laden cured mackerel (shime saba), bound to its bed of rice by a strip of seaweed (nori). Needless to say, the rice component on all pieces of nigiri was top notch: sticky enough to hold its shape, but not on the claggy end of the spectrum that befalls so many poorer sushi outlets.

My friend fancied heartier fare, so opted for the Yamamori Yakisoba (€17.50), an unctuous and rich mix of chicken, king prawn, roasted pork and seasonal vegetables stir-fried with egg noodles. This was another umami-fest and definitely warmed the cockles of our hearts on a dark October evening.

As a side, and to complete our Japanese smorgasbord, we ordered Seafood Tempura (€10.95), a mix of king prawn, baby octopus, squid and white fish coated in the country’s famously light crispy batter. The prawns, in particular, were spectacular: huge, meaty and juicily sweet. I still dream of them now.

In terms of drinks, it’s quite clear that the funky cocktail bar is put to good use: the cocktails take up almost an entire page of the drinks menu, with everything else – beer, wine, sake, plum wine and others – crammed into the other page. Had I not already committed myself to wine and sake for the night I would have loved to try their Asian-inspired mixes such as the Thai Whisper (€10.95) made with gin, elderflower and coriander, or the Kappa Cooler (€10.50) consisting of vodka, cucumber and lemongrass. The beer selection contains all the usual big Japanese brands such as Asahi, but also some interesting-sounding bottles from a craft brewer called Hitachino Nest, a new one for me.

But it was the wine I was interested in, and the list here is brief but covers a lot of bases. Interestingly there are more reds than whites on the list, which is unusual given the menu mostly consists of seafood. There is a noticeable absence of sherry also, whose long-overdue star has been ascending in recent years and is a proven match for sushi.

Of the four reds by the glass, three of them were quite spicy or chunky: a Spanish Tempranillo, a Southern French Syrah, and an Argentine Malbec. So I chose a light and juicy Castelvero Barbera from Italy (€7.50), which married well with the savoury Yakisoba.

My friend opted for one of the three white wines by the glass, a Croix de Vents Sauvignon Blanc from Pays d’Oc in France (€7.80), which was thankfully lower in acidity than the New Zealand examples we’re normally used to, and with more of a herbal twist. The other two options were a Pinot Grigio (of course) and, curiously, an aromatic Moscato Secco from Alasia.

Both wines came in gigantic portions that I estimated to surely be 250 ml, or a third of a bottle, instantly making their price tag – which wasn’t too exorbitant to begin with – even better value.

I was also on a mission to try sake for the first time, a beverage that’s become the hot and happening topic in the wine world. They have two on the list in Yamamori Sushi, as well as Korean Soju and Plum Wine, with the sake available in 125 ml, 250 ml and full bottle serves. We decided to order both sakes in order to compare and contrast – which I’m sure you understand was purely in your interest, dear reader. Both were served warm, on advice of our affable server. The Junmai Taruzake (€9.95 for 125 ml) was light a fruity in comparison to the Yamahai Genshu (€11.50 for 125ml), itself richer and more full-bodied. Both were served in traditional ceramic carafes called tokkuri and delicately presented with two little cups each called ochoko.

The flavours of sake are difficult to convey, at least to my inexperienced palate, and I found the tasting to be more experiential than expressive. That said, there was very little left of either sake by the end of the night, so I’m already planning my next sake sampling session, perhaps in the Yamamori Izayaka on George’s Street.

We both waddled out of Yamamori Sushi in a state was definitely not hunger, but not over-stuffed either, given the balance and easy digestibility of both the Japanese cuisine and the skilled chefs at Yamamori. I’ll be back again, this time with the stretchy pants on and an eye on that cocktail list.