Food On The Edge 2018 Launches in Barcelona 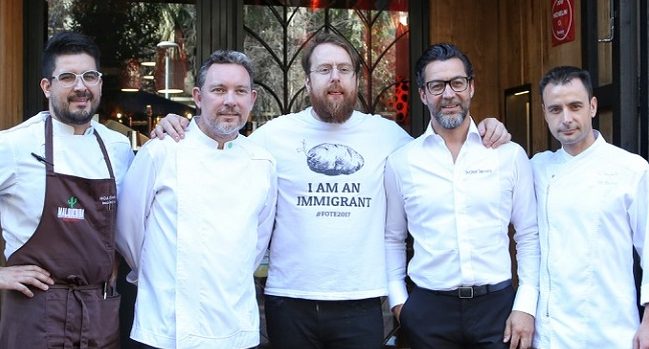 Food On The Edge 2018 officially launched in Barcelona in Albert Adriá’s Hoja Santa restaurant. Acclaimed Irish chefs and media persons joined the launch for the announcement of the 2018 themes and guest speakers.

FOTE is a two day food symposium that takes place annually in Galway – the venue this year is The Bailey Allen Hall at the National University of Ireland. Speaking at the FOTE launch was the Irish Ambassador to Spain, Ms.Sile Maguire, who said: “Irish people know more about Spanish food than the other way around. There are two million visits a year from Ireland to Spain which proves the very strong relationship between the two countries.” In light of recent events, JP McMahon paid tribute to renowned chef Anthony Bourdain, saying they would dedicate the symposium to his memory in order to highlight the importance of mental health in the industry.

Speaking at the launch, symposium director JP said: “We will continue to promote the strength of Irish food to our international speakers and visitors and use the event as a platform for sparking conversation”.

Tickets to Food On The Edge are available now at an early bird rate until 31st August for €300. This includes access to all talks and lunches as well as entry to the symposium’s wrap party. To book tickets, log onto www.foodontheedge.ie and follow the official hashtag #FOTE2018 for the latest news and updates.