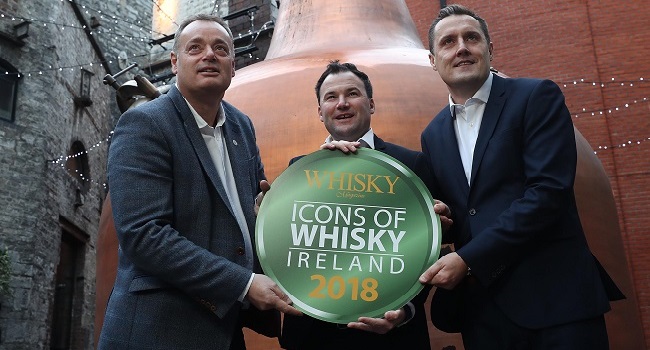 Last Friday, 24th of November, Irish Distillers was chosen as Distiller of the Year at the first Icons of Whisky Ireland Awards. These awards aim to highlight the diversity and passion of today’s Irish whiskey industry.

The awards were presented by Rob Allanson, Editor of Whisky Magazine and included the Hall of Fame Ireland ceremony. Commenting on the significant achievement, Jean-Christophe Coutures, Chairman and CEO of Irish Distillers said: “We are delighted to have been acknowledged with such a prestigious range of awards in this year’s Icons of Whisky Ireland. To receive recognition in a number of areas from whiskey tourism to innovation from our industry peers is extremely special. It is also a tribute to the growth and success of Irish whiskey and Jameson that the organisers of the Icons of Whisky, Whisky Magazine, decided Ireland warranted its own category from this year.” Commenting on the accolade he said: “Although I have the privilege of accepting this award, this win is down to the dedication, commitment and the passion of everyone at Midleton Distillery. This award is a testament to the hard work we have put in through our commitment to innovation.”