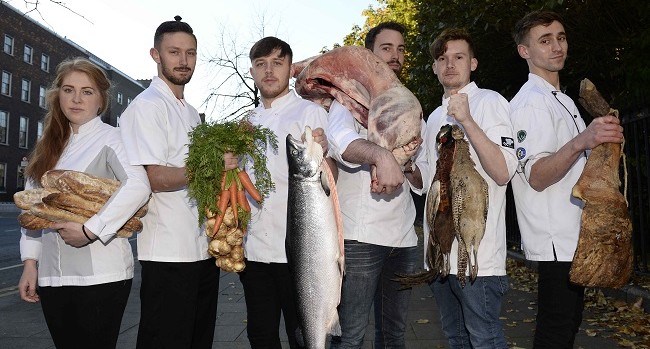 Hundreds of young chefs from across the country entered and now the six finalists for Euro-toques Young Chef of the Year have been announced at an exclusive event today in the five star Merrion Hotel. The six young finalists who have elected to push themselves to the limits of their creativity and skill, while facing some of the world’s best known chefs in the final judging process are:

The theme of this year’s competition is ‘Inspiration.’ Throughout the three-month process, candidates have been tasked with getting under the skin of what really inspires their drive and creativity. The first stage involved a social media entry, expressing their inspiration in 140 characters or less. Second stage was a written entry comprising a recipe and an explanation of their concept and thought process. he third stage was face-to-face interviews with a panel of top Euro-toques chefs and the GM of La Rousse Foods, during which they faced a daunting on-the-spot omelette challenge! While five of the six are settled in the kitchens of well known restaurants, Chris Fullam, following stints in Dublin restaurants including Amuse with Conor Dempsey and The Greenhouse with Michael Viljanen, has now moved on to set up new restaurant Old Street with Fergus Caffrey, opening this winter.

Finally, six finalists were carefully chosen to battle it out in the kitchen of Chapter One on November 27th with two separate skills tests to be cooked in two hours in front of a panel of top chefs – including 2 star Michelin chef Nathan Outlaw and Great Irish Bake-Off judge Paul Kelly. Graham Neville, Commissioner General of Euro-Toques Ireland and Head Chef Restaurant FortyOne at Residence said: “As Commissioner General of Euro-Toques, I am really excited about the competition this year. The standard is extremely high and it is a joy to see in the 29th year of this competition that there is such an abundance of culinary talent in Ireland. Regardless of winning or loosing, reaching the final of the competition is testament to the raw talent and flair in each of the finalists and I wish them all the best of luck. More importantly, the competition is a great experience for a young chef and hope they enjoy it and learn everything they can from it.”

Stuart Campbell, General Manager at La Rousse Foods added: “Each and every year that we are involved in this competition, we see how the bar is raised and the standard gets that little bit higher. It is a privilege to be part of this process and to watch as these young chefs go on to pave remarkably successful careers for themselves in the culinary world. It is always a hard job to pick the final six, however, I feel we have identified the best applicants and I am now really looking forward to seeing what these young finalists bring to this years competition”.