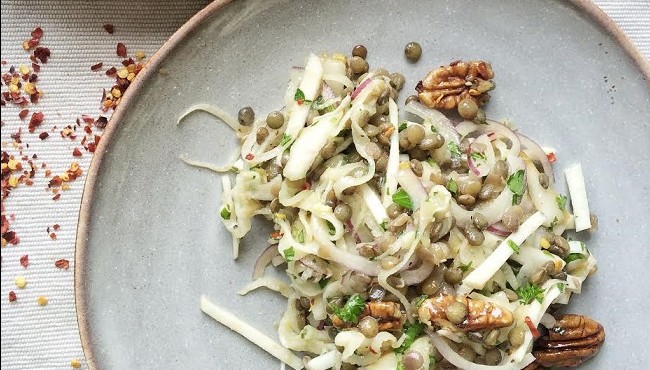 Autumn is well and truly here and what better way to welcome it than with this Fennel, Celeriac and Pear Autumn Salad. Fennel and celeriac are great Autumn vegetables (well technically fennel is a herb but we won’t get too hung up on distinctions). They are also vegetables that many people are not too familiar with. If you haven’t tried them before, give this salad a go. Fennel is beautifully aromatic with a mild licorice / anise flavour and a crunchy texture. It can be eaten raw or cooked; the crispy/crunchy texture means that raw fennel works really well in salads. 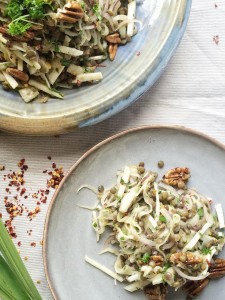 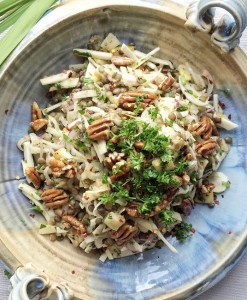 Celeriac looks like a knobbly turnip with patchy brown and white skin. It too can be eaten raw or cooked. Celeriac tastes a little like celery but with a much earthier flavour. Combined with the red onion, pear and parsley all of which are in season, this salad is beautifully crunchy, with subtle earthy, sweet and bitter flavours. Lentils are added for protein and to make the salad more satisfying. The dressing packs a little heat from the mustard and chilli; it’s always important to bring some sort of heat to Autumn/Winter salads. Finally, the candied pecans are the perfect sweet touch to finish it all off.

1. Place the lentils in a saucepan and cover by an inch with boiling water. Bring to a boil on the hob, then cover and reduce the heat to a simmer. Cook for approx. 15 minutes or until the water has been absorbed and the lentils are a little softer than al dente. If the water boils off before the lentils are tender, add a little more boiling water from the kettle. Once the lentils are cooked, drain them well and add them to a bowl.
2. Trim the fennel bulb at each end and using a mandolin, slice it very thinly. Peel the red onion and slice it very thinly also using the mandolin.
3. Remove the thick skin from the celeriac. Only half a celeriac is used in this recipe so set aside the other half (it can be chopped into wedges, tossed in a little olive oil and seasoned and baked in the oven for celeriac chips). Take the half celeriac and use the mandolin to slice it very thinly. Take the think slices and cut them into julienne strips.
4. Remove the core of the pear and chop the pear into think julienne strips also.
5. Finely chop the parsley.
6. Add the fennel, red onion, celeriac, pear and ¾ of the parsley to the lentils and toss to combine. Allow to cool for about five minutes.
7. To make the dressing; add all the ingredients to a bowl and whisk well. Pour over the lentil salad and toss to coat all the ingredients with the dressing.
8. To make the candied pecans; roughly chop the pecans. Place them in a dry saucepan over a medium heat for five minutes, tossing them every minute. Remove from the saucepan and set to one side. Heat a tablespoon of maple syrup in a saucepan over a low heat until it is bubbling, add a pinch of sea salt and add the toasted pecans back into the saucepan. Stir to coat them in the maple syrup and continue to heat for a minute or so. Remove them from the heat and place them on baking parchment to dry. They will become sticky so place them apart from each other so they don’t stick together. Allow to sit for five minutes.
9. To finish the salad; sprinkle the remaining parsley and the candied pecans on top. If you like heat, sprinkle another ¼ tsp of chilli flakes on top also.
Serve immediately or keep in the fridge in an airtight container for up to 3 days.

RECIPE FROM THE HONEST PROJECT Frances Walsh is the creator and writer behind healthy lifestyle blog, The Honest Project. The Honest Project focuses on plant based eating and cooking, using vegetables, fruits and wholefoods. Frances’ interest is in preparing and eating foods that are made from scratch but are practical and easy to make for even the most inexperienced cook.