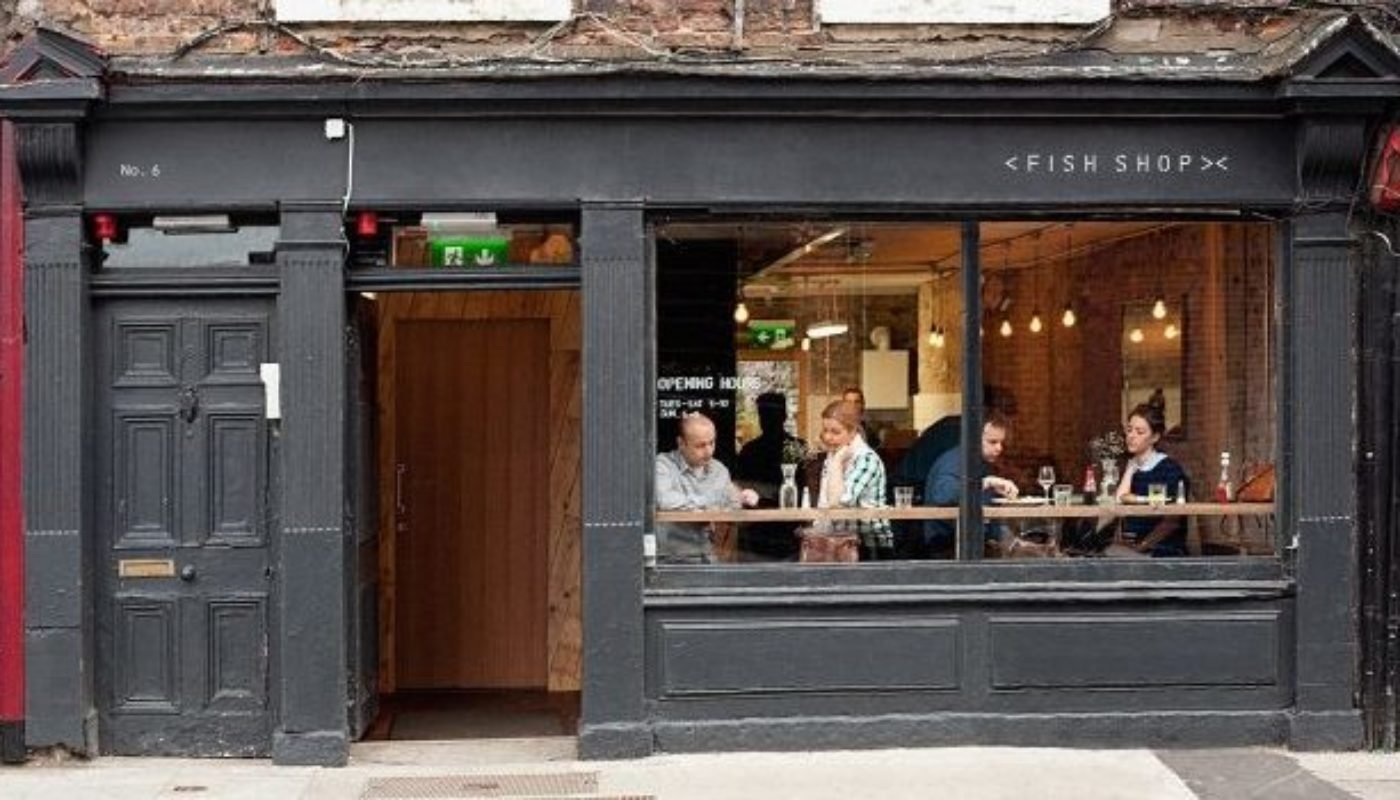 Falling Hook, Line and Sinker for Simple Yet Sumptuous Seafood at Fish Shop

I have often pondered the advice “under promise and over deliver”, the wisdom which would see us selling ourselves short only to exceed all expectation. Catching a cab to Smithfield, I ask the taxi driver to bring us to Fish Shop and he questions numerous times the existence of a restaurant with such a moniker, and likely questions the allure it would have to two ladies dolled up on a Saturday evening.

Fish Shop on Queen Street is the result of a wildly successful venture of the same name which had visitors from far and wide flocking to Blackrock Market, the stalls of which have produced a spate of distinguished alumni having learned the ropes in its hallowed halls. In this case, it is Paul Hogan and Jumoke Akintola who have graduated and transitioned from a shed-like outpost in Blackrock to not one but two establishments in Smithfield. Fish Shop Benburb Street offers some of the finest fish and chips in the city, while Queen Street offers a tasting menu style seafood experience – no mean feat for the couple, who chose to leave teaching careers in Jumoke’s native London with the aim of making quality seafood accessible to all here in Ireland.

We pull up to a minimalist space so pared back and unconcerned with appearance you know they must have something to back it up, not unlike the way academics are often seen to be unkempt in their appearance, preferring instead to focus all energy on their craft. White tiled walls and semi exposed brick contrast with dark re-purposed wood and shelves adorned with wine bottles of enjoyment past frame a wide open cooking space, wafting the scent of a wood fired oven at work throughout the petite dining room.

Smooth soul music ushered us to our table, with Paul offering a warm greeting and just one menu, the wine list, a well-thought out selection tailored entirely to compliment a seafood-based menu which was etched on the white wall for our perusal. Upon booking I had been advised that a four course set menu, which changes daily, would be the order of the night, wholly dependant on the catch of the day which is sourced from Kish Fish. While some may prefer reams of options to deliberate over, in this instance I was reminded of how off-putting a long-winded menu can be. A short, succinct offering littered with fantastically fresh, seasonal ingredients sang from the wall, building anticipation for the seafarer’s feast ahead.

A stellar by the glass offering of four white wines to two reds, alongside Prosecco and sherry left us with plenty of tempting options, with my dining companion choosing a glass of Catarratto Ciello, Cantine Rallo which was a deep amber coloured unfiltered Sicilian offering perfect acidity. My Picpoul de Pinet, L’Etang de Sol, was subtly effervescent and lip-smackingly citrus based – a Languedoc favourite for pairing with fish dishes. Both worked beautifully with an amuse of Tempura Oyster, Oyster Mayo and Pickled Dillisk, a stunning mouthful I gladly would have repeated half a dozen times more. Squid, Jerusalem Artichoke and Sprouting Broccoli also included tempura, which was again delightful as crisp tentacles popped in the mouth without a hint of the greasy aftertaste so often found in battered dishes. Diced apple highlighted the inherent sweetness of buttery tender curled squid head, contrasting with charred broccoli and earthy Jerusalem artichoke slivers – again a minimalist pairing with every distinct element well married. I recall spotting Nicki Segnet’s Flavour Thesaurus in a stack of menu writing ‘inspiration’ tomes whilst trawling Fish Shop’s Instagram and they have achieved what few manage, myself included, when left to their devices with this bible – controlled, confident flavour combinations. Next, sweetly tender cockles from Dromcliffe bay and plump rope mussels from West Cork swam contentedly in a fish broth infused with brill bones, an example of economical epicurean philosophy, along with sea weed and garlic (pickled, I muse). Something as simple as broth shouldn’t be noteworthy, but this Seaweed Soup managed such a feat – think moules marieniere with no heaviness and not a lick of cream needed. As we all enjoy the same course, the sound of spoons scraping the last drop of fragrant liquor fills the dining room – no one is keen to leave any behind, the ultimate compliment to the chef. Two courses in, I was growling to taste the buttery seductive scent which had filled the room so I heralded the arrival of Turbot, Celeriac and Browned Butter. The only thing better than butter itself, beurre noisette exudes a nuttiness which is damn near irresistible in any context and particularly delicious with rich turbot, in this case seasoned with flecks of dillisk seaweed. Celeriac’s aniseed undertone and sweetness, pureed, along with the bite of pickled cauliflower offered welcome sharpness against the luxurious sea of butter. At Fish Shop they have mastered the perfect formula – fish, fat, acid, to create simple yet sumptuous dishes far more than the sum of their parts.

Brill is as the name suggests, but meaty turbot is the king of the sea for me so I was delighted to be offered this as they so happened to have a couple of portions on hand, on the bone and packed with flavour. You could pay close to 35 euro a head for this perfectly executed dish just as a main course in another establishment, I thought to myself. No sides, no problem. Each dish is a perfectly composed plate with every ingredient a purposeful inclusion, adornments unnecessary. The final flourish, dessert of Almond Cake arrived as a light and simple golden sliver, perfectly pitched with mascarpone and softly yielding poached pear. The frangipane sweetness and butteriness of this humble dessert made for a sophisticated finish to a meal composed of simple elegance in every dish, which somehow left neither of us achingly full but wholly satisfied. Fish Shop brought to mind two of my favourite eateries Etto and Klaw. The former, an informal neo bistro championing simplicity and clever combinations alongside an expertly curated wine list. The latter, a treasure trove of sublime seafood housed in what is for all intents and purposes a shabby chic shack. Fish Shop, for me, was a marriage of the two concepts, and a blissful one at that. Our bill, for an amuse bouche, four courses each and two glasses of wine came to €82.

At Fish Shop, the emphasis is placed on executing the few dishes they offer flawlessly, with a welcoming ambience reminiscent of an intimate dinner gathering at a good friend’s home, ending with a bill that feels a little like robbing the hosts. Fish Shop is simply named, unconcerned with catchy monikers and fascades. At first glance, it may not look like the venue for your next outstanding meal, but don’t be fooled. Fish Shop undersells itself entirely, instead letting the food make the necessary waves, with tsunami-like delivery. I’m hooked.