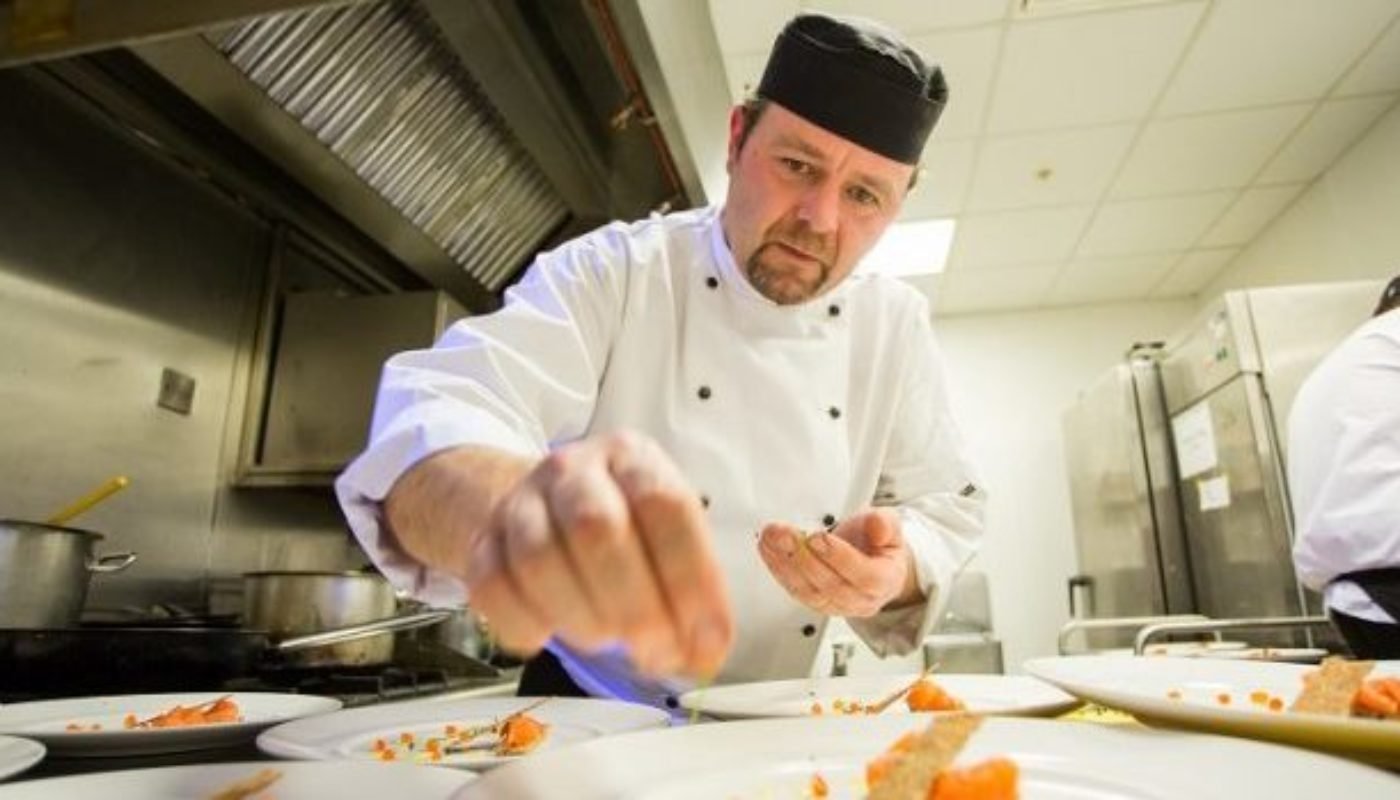 Executive Chef Tom Flavin has called the Limerick Strand Hotel home for the past number of years. With his extensive experience, he has many memories and highlights to choose from. Chatting to Tom recently, he recalled his initial interest in the food industry, remembering:

“I wanted to be a chef from as far back as I can remember, I had the choice of going to college to train to be a chef or go straight into the industry. In 1990 I was offered a job in Manila, Philippines so the decision was easy really.”

“At the age of 18 I boarded a plane for the first time and found myself working with lots of likeminded people in the food industry where my passion and love for food was enhanced, in a fine dining restaurant Truffles and in the Intercontinental hotel in Manila where I worked on my days off from the restaurant doing vegetable and ice carving training.”

One of the stand out memories from his youth was “making black pudding with my mother and grandmother on our farm after killing either a pig or heifer, tasting the raw blood for seasoning and stirring it as it cooled to prevent it from clotting”.

Tom has worked in restaurants in all corners of the world, from London to Australia, the Philippines and Singapore, before eventually finding himself in Limerick. He has worked at the Limerick Strand Hotel since 2007 and he is constantly innovating:

“We always try to keep learning, it is very important to keep the brain active we have introduced different styles and techniques over the years and strive to better them, from regen style banqueting for up to 1000 guests to sous vide cooking in all outlets, we are constantly trying new ways of improving our recipes and the training of the next generation of chefs is paramount to the survival of the industry.” “It’s on the menu for the next few weeks or until the Irish Asparagus is finished, who knows what it will be after that, it changes regularly.”

Describing his cooking style as “modern Irish”, Tom is a huge supporter of local suppliers, with over 50 producers appearing on the menus at the Limerick Strand:

“I have over 50 local suppliers on the menu, too many to mention here, I suppose after growing up on a farm I appreciate the work and passion that goes into producing quality Irish Food from growing baby carrots and beetroot to the best dry aged Angus Beef, hung for over 30 days, I like to visit them all from time to time with some of the team and to acknowledge the hard work that they do to get the produce to its best before I get it, so the least I can do is mention them on the menu, all I do is cook it!”

With his passion for Irish food, Tom and his team aim to give guests a “pure taste of the Wild Atlantic Way”. Tom himself, an advocate of local produce, was nominated as a Fáilte Ireland Food Champion, something he was “delighted” about.

I was absolutely delighted to be nominated as Failte Ireland Food Champion for my region, it really gives me a sense of pride to be able to shout loud about the wonderful Irish Food and produce available in the West of Ireland. With a number of achievements on his CV, from being nominated as Best Chef Limerick for 3 years, being nominated as one of Fáilte Ireland’s food champions and being part of the founding committee of the Pigtown Food Series in 2017, it’s understandable that Tom might find it hard to pick just one highlight, but he does have a top two:

“Cooking for my peers at the RAI food awards was one of the stand out moments and also hosting the Eurotoques AGM last year was a huge privilege.”

Describing how he copes with the demanding lifestyle of a chef and the search for a work/life balance, Tom says he is one of the lucky ones:

“I am very lucky to be married for 21 years to the most patient person in the world. Mol understands the demands of my chosen career and supports me always. I also have a great team of chefs that are well capable of running the kitchens on my days off.”

The chef shortage has made the career more demanding, but despite this, Tom is grateful to have such an enthusiastic and hardworking team working alongside him:

“I suppose the shortage of chefs over the past few years has made our jobs much more demanding, trying to ensure that the team are not under too much stress and pressure and ensuring that everyone gets sufficient time off is quite challenging.”

Every day is different, running the kitchens of one of the busiest hotels in the region, from one minute to the next you never know what the next challenge will be, but getting to work with the enthusiastic team we have in the Strand is very rewarding.

Offering advice to any budding chefs out there, Tom maintains that the keys to success are to “work hard and gain experience in good restaurants and hotels all over the world”.

Love what you do and you’ll never work a day in your life. For Tom, the movement towards promoting Irish food and hospitality is one that excites him, commenting:

“Yes I think there is a huge movement of promoting Irish food and Irish hospitality right now and all of Ireland’s top chefs are doing their utmost to put Ireland firmly on the radar as one of the best foodie destinations in the world.”

Looking to the future and Tom, like many of us, isn’t planning on slowing down any time soon: “I have lots of plans and lots of dreams for the future, just not sure which ones are going to materialise!”