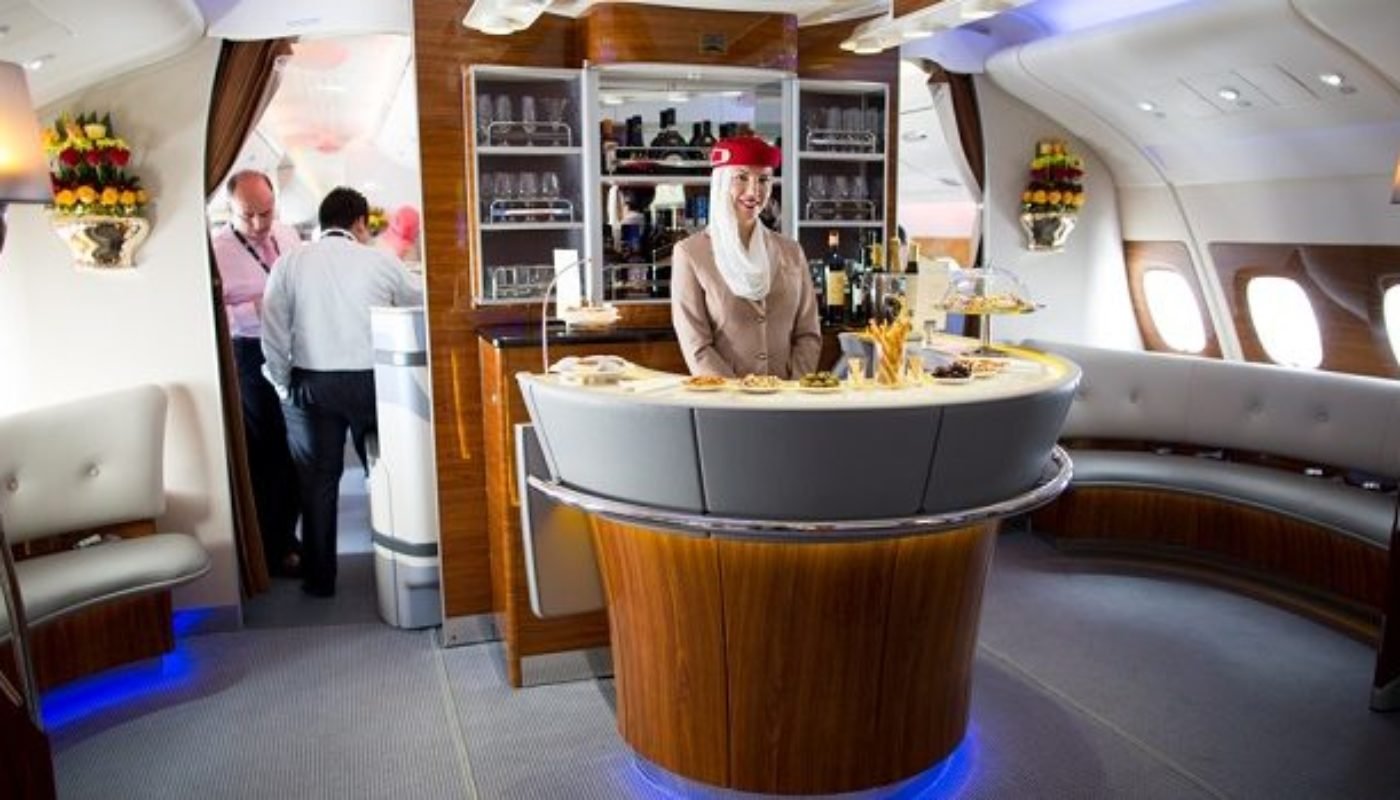 Home » Emirates Flight Diary: 24 Hours of Wining and Dining in the Sky

Emirates Flight Diary: 24 Hours of Wining and Dining in the Sky

I’ve always said it, there’s nothing like a glass of Veuve Cliquot Champagne to calm a case of pre-flight jitters. Okay, I’ll admit I have never uttered that sentence before now, but as I was handed a bubbling flute before taking off from Dublin by an immaculately dressed member of Emirates airlines cabin crew I vowed this would become a new travel ritual.

I might just be setting myself up for a fall with that commitment. It’s safe to say my expectations of airline food and service will never be the same after being thoroughly spoiled over the course of almost 24 hours, travelling from Dublin to Melbourne, with a stopover at Dubai, on an Emirates Business Class ticket.

Emirates food and beverage offering has long been regarded as being unmatched in the air. Before I jetted off I was dubious though; Emirates might be the best how good can food served on a plane actually be?

I pondered the limitations of what can be prepared at 40,000 feet; a meal cooked and served by a multi-talented, yet thinly spread cabin crew; from a ‘kitchen’ space smaller than your couch; in a pressurised environment that is said to mess with sense of taste; would there be a notable difference from the usual miserably mundane and barely edible in-flight food?

Boarding in Dublin at dinner time, it wasn’t long before I would find out just how far these boundaries could be pushed, and the white card Emirates food menus I was presented with confirmed that this indeed would be not be a simply ‘meat or fish?’ style affair. Did I want to be woken up for breakfast before landing in Dubai? I ticked the ‘yes’ box with glee.

Dublin to Dubai
Lights dimmed; settled into my semi-private seat; personal entertainment system fired up; my Emirates dining experience began like many of my best restaurant meals have: with a white linen table-cloth and the question “would you like to taste the wine?”

I had chosen a 2013 Chardonnay from the iconic Napa Valley winery Grgich Hills Estate, part of selection of champagne, vintage wines and ports available on board on a complimentary basis.

In line with a curated wine list, all uniquely suited to withstand the rigours of air travel, Emirates is the only airline to source ingredients and serve authentic dishes that represent the unique identity and culture of each region in its network. That’s all the more impressive when you consider the Dubai based airline flies to and from 142 cities worldwide.

As such, although we had long since sailed beyond the airspace of Ireland I was smug in the knowledge that my appetiser of delicately plated, perfectly Poached Langoustine with Crab Cocktail and sundried tomatoes, drizzled with lemon, along with the seasonal side salad and freshly baked bread had all been sourced from Emirates catering partners on the ground in Dublin, and made using local ingredients.

I was all the more smug that this was presented on Royal Doulton fine bone china with exclusive Robert Welch cutlery – not a plastic knife and fork in sight. Flawlessly prepared and served by the cabin crew, next, following a top up of wine, was the Grilled Irish Salmon, served with aubergine cannelloni, ratatouille, and a very local addition of mashed potatoes. Around me, my fellow passengers tucked into meaty mains of Roasted Chicken, served with bubble and squeak patties, and Pan-seared Lamb Loin, with a green peppercorn sauce. For dessert Emirates paid homage to a sweet classic in a contemporary Banoffee Torte that layered a creamy banana mousse on a caramel base, served with toffee sauce.

Does it count as a second dessert if it’s savoury? Either way I couldn’t turn down the generous offer to sample the Cheese Board, and any pang of guilt was soon soothed by the soft, young French double cream cheese, Pave d’Affinois, which completed a lineup of continental cheeses elegantly presented on a slate. The final flourish of award-winning Pacari Chocolates, the first single-origin organic chocolate entirely made in Ecuador, was also totally acceptable given that as well as being decadently dark it was vegan, gluten-free, fair trade and organic.

In a blissful state of contentment following dinner, I took advantage of the optional mattress, popped on the complimentary eye mask and a face mask (it’s what the supermodels to apparently), and snuggled up under the soft, charcoal grey duvet blanket, comfortable in the knowledge that the perfectly timed flight would have me in Dubai just in time for an early breakfast – the luxury of having a seat that reclines fully into a flat-bed really cannot be understated. And as promised, just before landing I was gently woken before a Continental Breakfast spread of fresh juice with seasonal fruit, yoghurt and a selection of bread, croissants and pastries was served.

I skipped off the plane, into the striking Dubai International Airport, and made a beeline for the Emirates Lounge. With exclusive access to the gates from here, for customers flying in First Class or Business Class, I was able to relax before the next flight, surrounded by the creature comforts on offer: gourmet buffets; à la carte meals; even an option to take relaxation to the next level with a spa or beauty treatment.

For the next leg of my trip I would be flying aboard a Airbus A380, the pride and joy of the Emirates fleet (the youngest airline fleet in the world), and I could already see what all the fuss was about as I made myself familiar with my new home for next 13 and a half hours, including a sports car-esque seat and personal mini-bar, whilst sipping another glass of pre-flight bubbles.

Though the seatbelt sign was barely extinguished before I was out of my seat to check out one of the most impressive features of the A380: the Onboard Lounge. Practically emulating the promotional shots I had seen, I chatted to the friendly cabin crew behind the sleekly designed bar, and mingled with other jet-setters mingling over cocktails and a selection of nibbles. Back in my little cabin, and half way through watching the multi Oscar winning La La Land, still showing in cinemas at the time, my choice of lunch arrived: a traditional Arabic Mezze, complete with immensely falvoursome mudjaddaara, muhammara, stuffed vine leaves and houmous, and seeming as a mezze is traditional served to accompany alcoholic drinks a lunch time glass of Famille Gonnet La Juliette Chateauneuf du Pape was entirely appropriate. Sticking to the Middle Eastern theme, I enjoyed next a Seafood Machbous. Similar to a biryani, hidden within the golden hued, aromatic rice were tender chunks of fish and prawns, all layered atop a richly spiced sauce which counteracted the dryness airline meals usually fall down on.

Among the other options included a Chicken Schnitzel Sandwich, and while this may not sound very noteworthy, the menu divulged the combination sourdough ciabatta bread sandwich with rustic-style chicken schnitzel, Swiss cheese and homemade coleslaw was in fact a signature dish created by renowned chef and restaurateur Neil Perry of the iconic Sydney restaurant Rockpool. Sensing my despair choosing between the Chocolate Mango Tart and Passion Fruit Tart, my server suggested that I have a taste of both – just a sample of the countless considerate gestures made by the cabin crew throughout my journey.

It must be said that the in-seat power and side table would combine to make your seat into the office space on the move, and if work was on my agenda that’s exactly what I would have used them for. But I did capitalise on these features to charge my smart phone, allowing for maximum documentation of the trip to share boastfully on social media – using the in-flight WiFi obviously – and to prop up my choice of magazine from the selection on offer.

After another snooze, it was time for my final meal, and as I expected Emirates weren’t going to fall down on the final hurdle. A similar continental breakfast to the last leg was served this time with a full breakfast dish of my choice, scrambled eggs with sautéed spinach, mushroom and butter beans in tomato sauce – enjoyed all the while watching Meryl Streep’s acclaimed performance in Florence Foster Jenkins.

I floated off the plane in Melbourne, fresh as a proverbial daisy and freed from the preconception that airline food has to be in any way inferior in taste, provenance or creativity.

For more information on Emirates or to book your flight visit www.emirates.com/ie/.