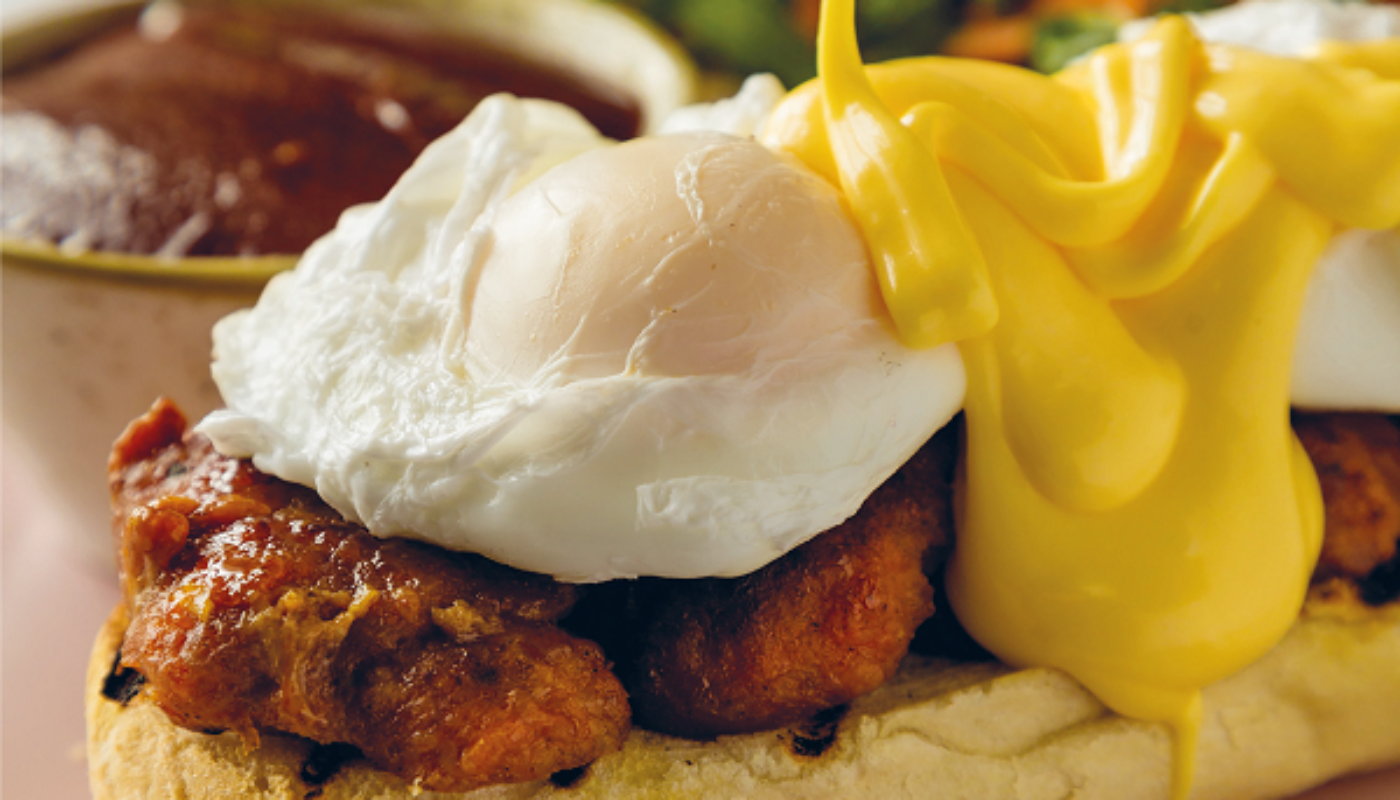 Eggs Benedict with chorizo patties and hollandaise sauce recipe from the best-selling Simply Simons – The Diner Cookbook .There are lots of stories about where this dish originated, but this is my favourite: in 1894, Lemuel Benedict, a Wall Street broker who was suffering from a hangover, ordered ‘some buttered toast, crisp bacon, two poached eggs, and a hooker of hollandaise sauce’ at the Waldorf Hotel in New York. The Waldorf’s legendary chef, Oscar Tschirky, was so impressed that he put the dish on his breakfast and luncheon menus after substituting Canadian bacon for crisp bacon and a toasted English muffin for toasted bread.

One of the most ordered dishes in diner history is eggs Benny, and it’s another one of those dishes that has as many variations as there are stars in the sky. That’s what I love about eating in different diners in different parts of the US: every diner’s eggs Benny is different. With my recipe I’ve added a little twist: I’ve used a chorizo patty instead of the ham that’s usually served. And hey, if you haven’t the time and the patience to make your own hollandaise, a shop-bought one will be fine. But if you do make the effort, you’ll thank me!

To Serve:
– 4 English muffins, or bread of your choice
– 110 G Butter
– Pinch of cayenne pepper

Let’s start with the hollandaise.

1. Bring a saucepan of water to the boil and as soon as it does, kill the heat. Grab a large bowl and pop in the egg yolks, whisk them up with the lemon juice and the white wine vinegar until you really start to see the mixture thicken.
2. Put the bowl over the saucepan of hot water and slowly pour in the melted butter as you continue to whisk constantly to form what’s called an emulsion, which should be a little thinner than a mayonnaise. Leave the bowl sitting on the pan when done, ready to serve, and don’t panic if the mixture thickens up a little: just add a drop of hot water to thin it out again.

On to the poached eggs.

1. In a large pot, boil some water, and then turn it down to a simmer. Add a little drop of white wine vinegar and then carefully break the eggs into the water. (It’s easier if you crack the egg into a small cup and drop it into the water: it stops the egg white from going all over the pot.)
2. Cook until the egg is set – in other words, no longer transparent, but before it goes hard – then remove the egg with a slotted spoon and leave to sit on some kitchen paper. (During MasterChef, Daniel Clifford showed me the twice-cooked method. Drop the eggs into the water for a minute, then take them out, and just before you serve, give them another minute in the hot water. Easy peasy. Believe me, if I can do it, you can!)

And now, the chorizo patties.

1. Skin all of the sausages, both the pork ones and the chorizo ones, and put them in a bowl and mix them so they form one mixture.
2. Then shape them into small patties, as flat as you can, as they’ll cook quicker and more evenly.
3. In a small pan, heat a little olive oil, and lay the patties in, two per portion.
4. Cook until coloured, then flip over and fry until cooked through, which should take 7–8 minutes.

To serve:
1. Toast the English muffins, spread a little of the melted butter on them, and place on your serving plate.
2. Add the chorizo patties on top, then the poached eggs, and dress with the hollandaise.
3. Sprinkle a little cayenne pepper over the sauce.
4. Serve these with “home fries” and, baby, you’ll be in NYC in a heartbeat! Simon Delaney is one of the best known faces on Irish TV. From his break-through role in RTÉ’s comedy drama series Bachelor’s Walk to roles in TV favourites such as The Fall, Mooneboy and Coronation Street. In 2016 he starred in one of the highest grossing films of the year, the horror sequel, The Conjuring Part 2. Simon is about to reprise the role of Dublin’s most quoted Da, Jimmy Rabbit, on stage in The Gate Theatre, Dublin the theatrical version of The Snapper.

Simon can be seen alongside Anna Daly every Saturday & Sunday morning on Virgin Media One’s Weekend AM, where he talks sport, current affairs and most importantly food! As an actor, life on the road has given Simon a taste for trying new dishes everywhere he went. It wasn’t until he worked in New York on hit TV shows like The Good Wife and films such as Delivery Man that he fell in love with classic American diner food. Published in 2017 SIMPLY SIMON’s – THE DINER COOKBOOK is his love letter to his favourite diner dishes.