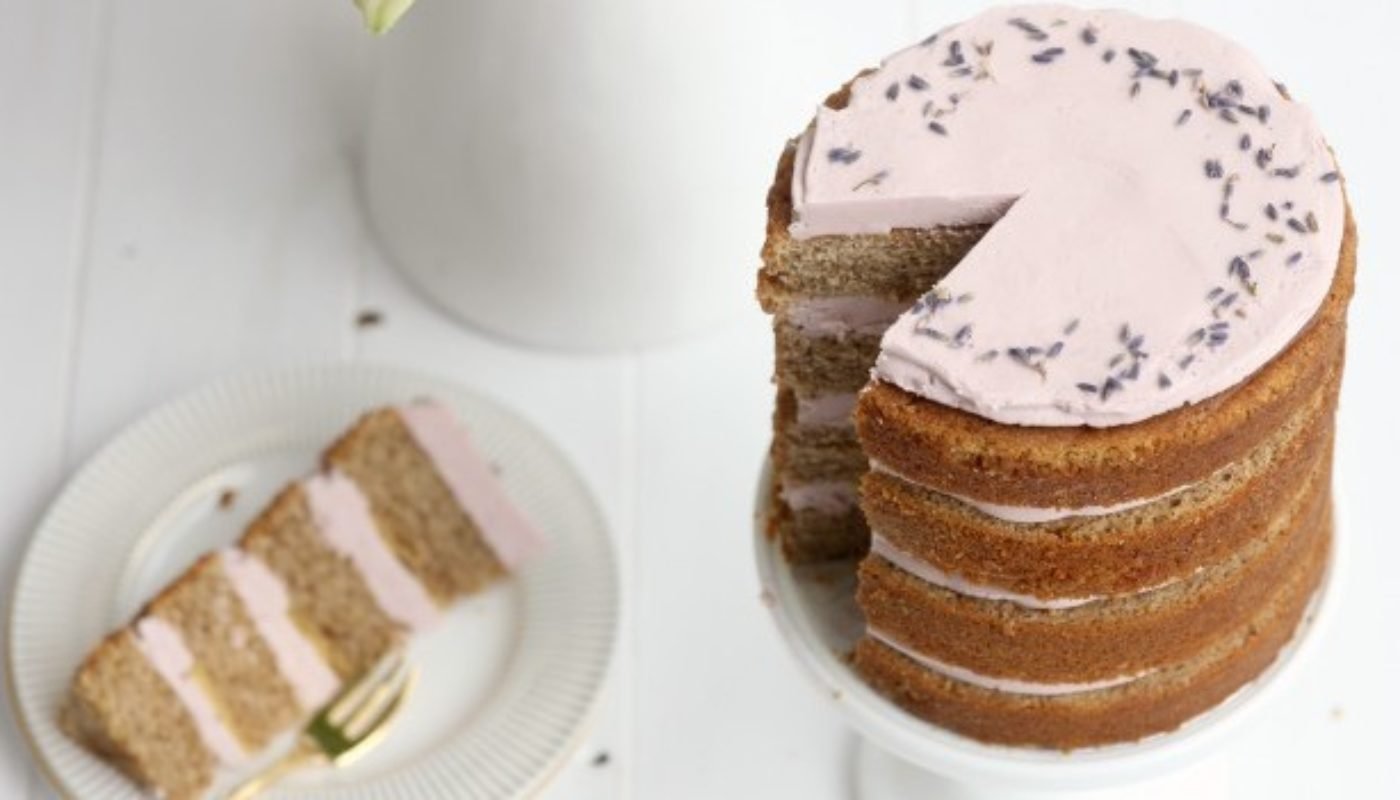 Earl Grey Tea is a black tea blend flavoured with bergamot orange. Its citrusy aroma naturally lends itself to flavouring cakes and confectionary and it pairs well with floral accents such as lavender. I have had varying degrees of success with Earl Grey cake until finally experimenting with this amazing recipe. The tea-infused milk adds just the right amount of flavour to the vanilla-flavoured cake as well as keeping it delectably moist. Paired with fragrant lavender buttercream and contrasting lemon curd this cake is delicious far beyond what its name may suggest! The pretty flavours are perfect for a feminine occasion and as my birthday falls in April I think I will be baking this one for myself to celebrate!

1. To make the cake, preheat the oven to 150°C/315F.
2. Grease and line two 6” cake tins (or for a shallower 2-layer cake use two 8” cake tins).
3. Place the milk in a small saucepan over a medium heat and bring to a simmer. Remove from the heat and add the tea bags. Cover the pan and leave to infuse for around 30mins. Remove the teabags, squeezing out any excess liquid. Measure the remaining milk and ensure that there is 250ml. If it has reduced slightly add more milk to bring it up to 250ml.
4. Cream together the butter, vanilla paste and sugar by hand or in a mixer.
5. Beat in the eggs one at a time, mixing well after each addition.
6. Sift together the flour, baking powder, ground tea leaves and salt.
7. Pour the flour mixture into the butter mixture in 3 additions, alternating with a third of the milk each time and mixing gently after each addition.
8. Pour the batter into the prepared tins and bake for approximately 40-45mins until springy to the touch and a skewer inserted into the centre comes out clean.
9. Leave to cool in the tins for 10-15mins before turning out onto a wire rack to cool completely.
10. To make the lemon curd: melt the butter with the sugar, lemon zest and juice in a small pan over a low heat. Beat together the eggs and the egg yolk in a bowl and add to the lemon mixture. Stir gently over a low heat until the mixture has cooled enough to coat the back of a spoon. Remove from the heat and pour into a sterilised jam jar. Leave to cool and store in the refrigerator until needed. Any leftover curd will keep in the fridge for up to two weeks.
11. To make the lavender icing: place the milk and lavender flowers in a small saucepan over a low heat. Bring to a simmer, remove from the heat and leave to infuse until cool. Beat together the butter and icing sugar in an electric mixer until pale and fluffy (approx. 10mins). Strain the lavender from the milk, add the milk to the buttercream and beat again. Add a few drops of purple food colour if desired.
12. To assemble the cake: level the cakes and cut each cake in two to create 4 layers (if an 8” cake simply sandwich the two layers together as follows). Place the first cake layer on a plate or cake stand. Pipe a ring of buttercream around the edge of the layer and fill the centre with buttercream to a shallower depth than the ring. Place some lemon curd in the centre and spread around the layer keeping it inside the piped ring. Repeat with two more layers and top with the final cake layer. Spread the top with icing and sprinkle with lavender flowers if desired.