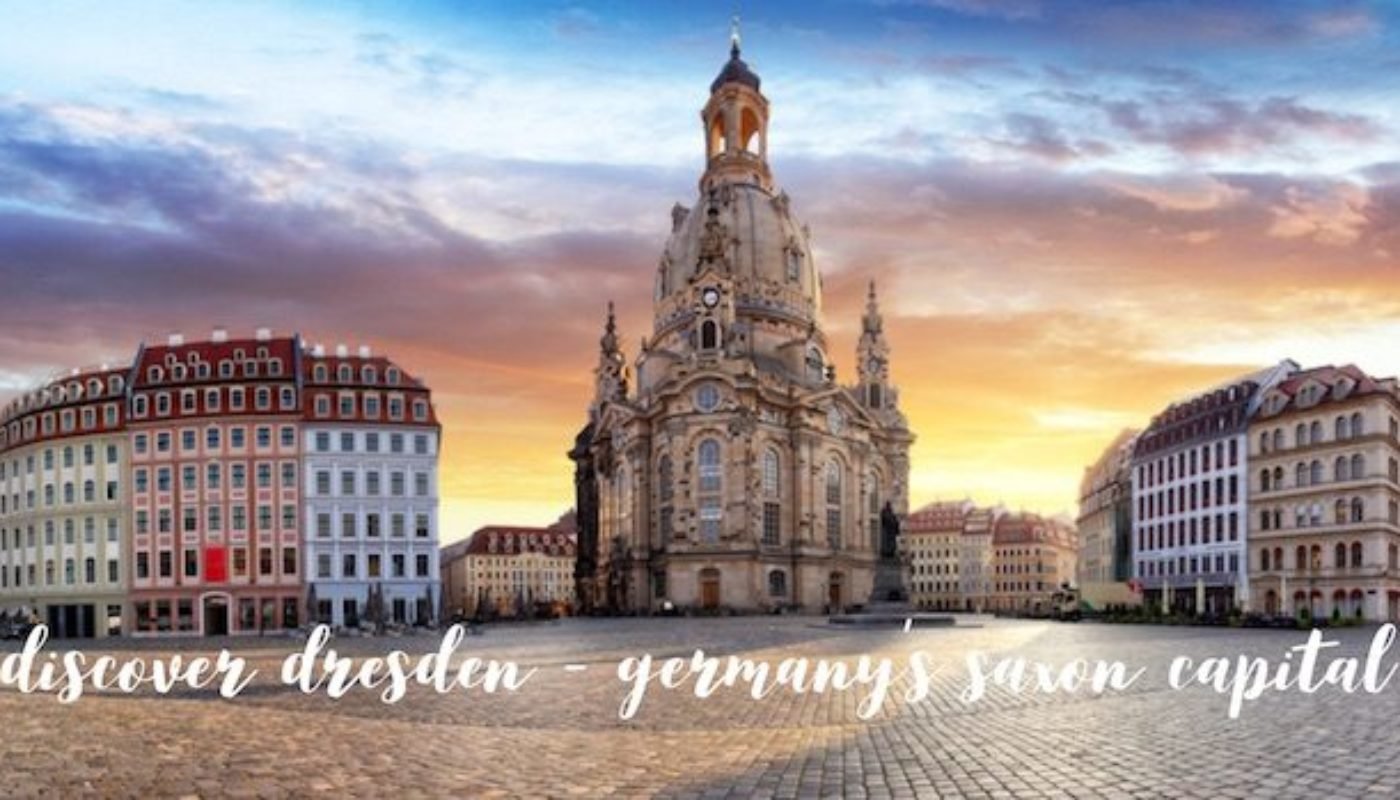 When people think about visiting Germany or any country really, it’s always the capital city that seems to grab their attention. Indeed, I’m guilty of it myself. You want to visit the buildings, monuments and spectacular sights you’ve seen in movies and read about in books.

But once you get the capital city out of the way as it were, that’s when the real fun begins. Now, you’re free to explore a new place with a new culture. Such is the case with Dresden, a vibrant city in the region of Saxony. Before I travelled to this city, I had a few people ask me where it was (though one of my co-workers insisted I return with some Stollen – long story short, we were all addicted to this miracle bread and it didn’t survive as long as it should have). This seemingly little known city in the south of Germany is often overlooked.

Once you pluck up the courage to travel to cities and regions for more than a bucket list tick, you’re free to open yourself up to exciting adventures, rich cultures and a vast history. After suffering greatly from the allied bombings, the city of Dresden was all but destroyed in the Second World War. It took many years for the city to attempt to rebuild itself. When speaking to my guide, he referred to the restored Dresden as ‘new historical’, a very apt description of the city.

Here on a food tour, I experienced everything from traditional Saxon cuisine to more modern interpretations and dishes. Despite the city being rebuilt, its spirit remained intact and the people are very proud of their tradition. Schloss Pillnitz is just a short 10-15 minute tram ride from the city centre. We arrived at this historic palace for a tour, but couldn’t resist sampling some traditional Saxon dishes in the castle’s hotel restaurant first.

I always love dining in castles as it helps me visualise lively historic feasts, even if I am sipping a glass of wine rather than a bubbling pint of beer.

For lunch, I chose to munch away on a traditional board filled with cheese and meat from the region, while my companion went for the duck.

Tucking into dessert heaven, I couldn’t resist devouring the warm pudding with cherry sauce and cashew – divine. My companion was delighted with his chocolate mousse with blackberry ragout.

On full stomachs, we toured the buildings, passing through the palace kitchens, historic exhibitions and the ‘lust garden’ or ‘garden of passion’, a place were lavish parties were held in the past. While Dresden was destroyed in the Second World War, the castle was far enough away to escape any damage. In fact, the palace was used as a temporary home to city residents who lost their homes during the war, living here until 1990.

Walking tours are a great way to see the city, with tours of the old city, Meissen pottery and more all included. If you’re looking for something completely different, the Dresden Night Walk offers an alternative look at the city and takes you through the artistic streets of new Dresden. Schloss Wackerbarth is a great place for sparkling wine enthusiasts to visit. You can take part in the public wine tour of the cellars and also sample three of the region’s sparkling wines. There’s also a wine shop and different tours, with an audio guide in English.

A place for the creative, the Alte Meister Café & Restaurant was my port of call for lunch on my first day in Dresden. Located right beside the Opera House, the restaurant is popular among those working and performing in the theatre. Case in point, my guide pointed out German theatre man Christian Thielemann, who happened to be dining at the same time as us.

The restaurant has a simple, yet beautiful design, with high walled arches, white walls creating a bright, airy space. While perusing the menu, the chef told us that we’d come on the day of his new menu premiere so just like the theatre, we were going to be treated to opening night of the new menu.

The first act consisted of delicious plates of salmon trout marinated with beetroots and an exceptional beef tartare. This was followed by braised cheeks of veal in a port wine sauce and a filet of pikeperch in bacon sauce. The second act was well received by our table and I made a mental note to one day return for dessert, the third act.

The restaurant is a contrast between the old and new, like much of Dresden. Old architecture fused into the the buiding, with some modern paintings too. Located 5 minutes from the Frauenkirche, Sophienkeller im Taschenbergpalais is a historic vault restaurant located underground in the centre.

Offering traditional Saxon cuisine in rustic surrounds, the restaurant caters for parties, events and private dinners. Family friendly and buzzing with people of all ages there are more private spots to dine if you aren’t a fan of people in costumes. The menu here puts a heavy focus on traditional Saxon dishes. Noticing a suckling pig roasting on the fire in the distance, I ordered the Saxon Sauerbraten with Raisin Sauce, Red Cabbage and a Potato Dumpling topped with Breadcrumbs.

Not one to resist dessert, I tried the traditional Eirschecke which is quite similar to cheesecake. With flowered dusting on top, the creamy custard sponge is so soft it practically melts in your mouth. Suffice to say, you won’t leave this restaurant hungry.

As you can’t visit Germany without having a beer, I sipped on a small glass of Pilsner beer. I wouldn’t call myself a beer drinker in the slightest, so I was surprised that I enjoyed it. It was light and easy to drink and went very well with my rich warming meat dish.

What I like about vault restaurants is the atmosphere and the traditional aspects which makes you feel as though you’re dining long ago. This particular restaurant was named after a church which used to stand beside it but was destroyed during the war.

This restaurant is the perfect mix of a museum and restaurant, located right opposite the church. Taking you through the history of trams in the city thanks to some informative exhibitions on the walls, the restaurant is also home to a historic tram which now doubles as a private dining area.

Popular with both locals and tourists, visitors to Dresden 1900 Museumgastronomie can expect to enjoy traditional Saxon food.

I visited Dresden 1900 Museumgastronomie on a Sunday, which is their family brunch day. A lively, fun atmosphere, I almost felt out of place dining alone. Luckily, there was so much to look at on the walls , all snippets of history, that I hardly noticed.

While happily watching the silent film playing in the corner, which traced the history of the tram line in Dresden, I enjoyed traditional dishes of Saxon Potato Soup with Crispy Sausages. As the pianist chimed away to an up-tempo version of La Vie On Rose, I tucked into my main of Dresdner Sauerbraten and the sweet Saxon Quarkkeulchen for dessert.

For those looking for high end cuisine during a stay in Dresden, a visit to Restaurant Atelier Sanssouci is highly recommended. Located in nearby Radebeul, this French restaurant is just a 5 minute walk from the Radisson Blu Hotel.

With a menu encompassing of a shot of warm beetroot, smoked eel, sheatfish, poached egg, cheesecake and a pumpkin cake, this was an incredible dining experience.

Service was excellent, especially my waitress Sandra, and the wine pairings were spot on. The culinary highlight of the dinner for me was the smoked eel.

Not something I would have eaten much of before, the smoked dish was perfectly cooked and accompanied by mustard seed and red cabbage, both of which elevated the dish to even higher standards.

This dish was one of the restaurant’s specialities and being my starter, was the best possible way to kick off the proceedings.

This hotel is location-perfect for a stay in Dresden. I stayed in a deluxe room on the 6th floor of the hotel, a room with the most incredible panoramic view of the main square.

A short 5-10 min walk from all main attractions and less than 5 minutes from the nearest tram, the Steigenberger Hotel is where you need to stay.

Dinner is an occasion in itself, with a winter salad, followed by goose and dumplings and finishing up with a scrumptious curd cheese potato pancake, a true traditional Saxon dessert, which will appeal to anyone with a sweet tooth.

Located in Radebeul, the Radisson Blu is an escape from the hustle and bustle of the city centre. Nestled in the countryside (though only 20 mintues from the centre), the hotel features spacious and luxurious rooms, an impressive spa and also some villas which are perfect for families.

Schloss Wackerbath is also very close, so you can enjoy a spot of sparkling wine a short spot from your hotel. Restaurant Atelier Sanssouci is also a brief 5 minute walk and you’re only 10-15 minutes drive from the airport here too. Getting around Dresden couldn’t be easier. The tram lines are unbeatable, so punctual and serving the whole city and the hinterland (including Radebeul).

In terms of getting to Dresden, don’t be put off by the thought of an interconnecting flight. Luftansa lives up to the punctual German stereotype, with two flights feeling like one. Fly from Dublin via Frankfurt or Munich and arrive in Dresden in a little over three hours – simple. You even get a nice pastry or biscuit on board the flight – what’s not to love?

For more information about Dresden and to plan your perfect holiday, visit dresden.de.