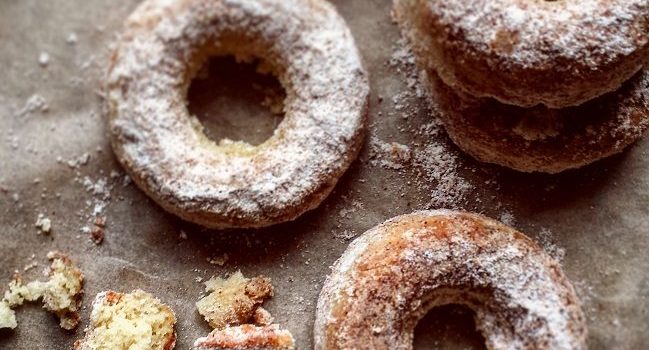 I’ve noticed that doughnuts seem to be the edible trend du jour – their ubiquity, especially on Instagram, is undeniable. The rise of the quintessentially American doughnut goes way back, of course; for centuries in the US it has been a go-to snack – a fast, inexpensive, comforting fix for the everyman, even being one of the main fuels for the troops of the First World War back in the day. The doughnut as a trend is exploding on social media; owing largely perhaps to the doughnut’s visual appeal and endless possibility for variation: they are the perfect canvas for edible creativity. These doughnuts are not the modest snack of old, but instead are highly elaborate creations; styled, filled, glazed, and topped to dazzling effect. The trend has even incited a roaring trade for gourmet doughnuts; with correspondingly crazy price tags. This is so far from the idea that this simple snack was originally a humble be-holed ball of fried dough that was easily attainable and within the budget of everyone. Oh well. Last week, I noticed a doughnut shop pop up around the corner from my place, and just yesterday another appeared right next door: they’re closing in. I’m scared — doughnuts are that dangerous mix of highly-delicious and highly unhealthy. Being someone of rather pitiful willpower I decided that I’d better get working on an alternative – stat. So this grain-free, sugar-free doughnut recipe is just that; a low-carb alternative that might temporarily appease the doughnut demon that we know we all have lurking within. Frying the doughnuts is not necessary, but recommended if you want them to deliver a more authentic doughnut taste. These aren’t deep-fried; just lightly fried in a shallow amount of fat, but it seems enough to trap some moisture in the dough.

1. Preheat oven to 180C and grease a doughnut pan.
2. In a large bowl, whisk together the dry ingredients.
3. Stir in the wet ingredients until well combined.
4. Fill doughnut pan and bake for about 12 minutes, or until slightly brown around the edges. The baking time will depend on the size of your doughnut wells though, so keep an eye on the oven.
5. Remove from oven and let cool.
6. In a saucepan, add about a tbsp of coconut oil or butter. Heat over medium heat.
7. While the pan is getting hot, combine cinnamon, protein powder, and powdered erythritol.
8. Once the oil is hot, add doughnuts to the pan.
9.Turn after 1 to 2 minutes, and cook the other side another minute or so. Remove and roll each side in the topping. Naomi Ní Chatháin is a WSET-certified wine specialist from Co. Clare. She studied French and Philosophy in NUI Galway before pursuing a master’s degree in Wine Tourism (or ‘oenotourisme et projet culturel’) in Nimes.

Naomi loves French culture, and has lived in different parts of France over the years.

Her other passions include the pessimistic philosophy of Schopenhauer, the music of Bob Dylan, and road trips across America. Naomi is also a professional baker, and founder of NaomiBakes.com.

She is a firm believer in eating delicious, healthy cakes every day, and has a small subscription-based healthy cake kit delivery business.