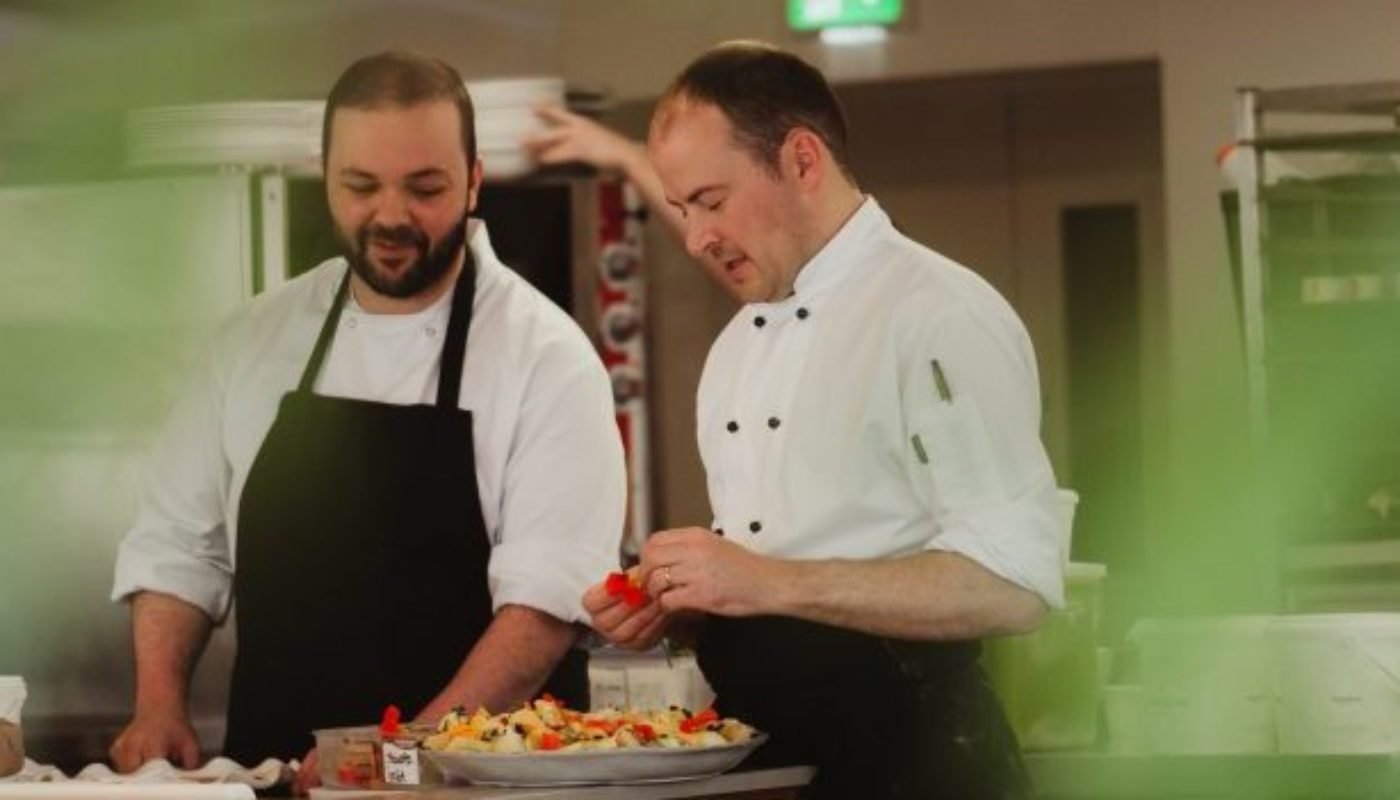 Home » The Road To Tipperary May Be Long, But It’s Worth It – A Chat With Richard Gleeson From Dooks Fine Foods

The Road To Tipperary May Be Long, But It’s Worth It – A Chat With Richard Gleeson From Dooks Fine Foods

If I’ve learned anything from talking to chefs and restauranteurs over the past two years, it’s that opening a restaurant and keeping it running is no easy feat.

Of course, these things are helped by loyal customers, great produce and a passionate team. This was exactly the impression I got when chatting to Richard Gleeson, chef proprietor of Dooks Fine Foods in Fethard, Co. Tipperary.

Speaking over the phone as he finished up a day at work, I got a real sense of how his business works and how his determination to change careers and follow a new path have helped Dooks Fine Foods grow over the past two years, which is echoed in their recent Bord Bia Just Ask Restaurant of the Month award. I had a previous career in advertising and I’d been looking for a new avenue where I’d end up in a position where I was working for myself. I tried out a number of ideas and ended up deciding to go into food.

“I did the 3 month certificate course in Ballymaloe Cookery School and that was almost like a litmus test, a toe in the water kind of thing. And then I went and worked in London for five years once I had fully committed to sticking with the idea of food and opening my own business.”

Choosing to open a business is a big step and I wondered why Richard chose the food industry, especially when so many restaurants struggle to stay open past the first year. Was there always a passion for food in his life?

“Not particularly actually. The strange thing is that when I was a youngster I was quite a picky eater. Up until I was about 17 or 18, I hadn’t much of an appetite and i was quite small. It was only after then that I started enjoying my food a lot more.”

Recalling his childhood food experiences however, Richard praised his mother’s cooking, saying: “What I did have growing up, which I never gave much thought to, was being brought up in a home where there was an intense appreciation for cooking every meal ourselves. Eating out was a treat once or twice a year and so my mother would have produced very healthy tasty food using good ingredients.”

He added: “When I saw what was being taught in Ballymaloe, it highlighted to me what was always present in my life and it was something which I valued without thinking about it consciously. And I brought that with me to London and it was the basis for a lot of my decisions with food.”

After returning to Ireland, Richard ran a pop-up cafe in his friend’s cafe in Ringsend and admits that “I naively thought I would be able to find something quite quickly”. In fact, it was four years later when “a premises was offered to us in Fethard, Co. Tipperary, which is where my family is from”.

“My wife was expecting a child at the time and we decided to leave Dublin and give Tipperary a shot. The plan had been to stay in Dublin, but here we are coming up to our second birthday and the time has flown by.”

Describing the food on offer in Dooks Fine Foods, Richard laughs, saying that “it’s a bit mad the amount of stuff we do. When you walk by the window or when you walk in the door, I always wanted to have a display of food that had a visual impact, that had a certain wow factor to it. So that’s our delicatessen for want of a better word.”

There’s a range of freshly produced salads on display and in our day fridge, there’s some meat and fish options as well to go with those. We also produce all our own breads, cakes and scones, so they’re all on display throughout the day.

He explained that they have a retail section where “we produce our own jams, chutneys, granola and things like that. You can order from the display counter if you’re sitting in the restaurant or you can order from the hot kitchen. And we also do cookery demonstrations (one a month) and we do an evening opening on Saturdays so we’re very busy.” Wanting to keep things creative, Richard changes the menu every month and a half, “using whatever is in season at the time”. His favourite dish on the menu at the moment is a bruschetta, though “that’s a loose description of what it is”.

“It’s some of our toasted white yeast bread with some garlic, roasted balsamic vinegar, goat’s cheese from Fivemiletown, onion squash from an organic supplier in Cashel, pumpkin seed and rocket pesto and some rocket as a garnish on top.”

Dooks Fine Foods was recently named the Bord Bia Just Ask Restaurant of the Month for November. When I brought it up, Richard admitted that he was “very surprised” to win the honour as it hadn’t been “one that I was expecting”.

It was completely out of the blue and as awards go, this wasn’t even something that was on my radar. It was just brilliant.

A big part of the Just Ask Award is the use of quality Irish produce, something Richard is definitely passionate about. Forcing him to name his top three favourite producers (a cruel question I know), he struggled narrowing it down, which honestly only goes to show how many producers he utilises.

One of his key producers is Annie’s Farm, who supply Dooks Fine Foods with organic vegetables: “She’s just transformed a lot of what we do, because I always wanted to keep things simple and simple things done well wasn’t a written motto, but it was at the core of the ethos of what we’re trying to do. You don’t have to do much with her produce to make it tasty and flavourful, it speaks for itself.”

Richard also gave a shout out to his meat suppliers, from Crow’s Bacon and his butcher (GET NAME) from Killenaule who has his own farm and butcher shop, so you really can’t get someone with as much knowledge or experience. He’s taking his own beef that he’s reared himself and butchering it and getting it right to you.”

Finally, Richard praised Cashel Blue Cheese, saying: “I haven’t used them recently but I feel blessed to have the likes of Cashel Blue literally four miles from me. They’ve just carved such a path for so many other producers. It’s sold globally and it’s fantastic. They started making this sheep cheese recently and I just find it mind-blowingly good. It sold so well last year that they actually ran out of it and it’s only just come back in stock, so I’m going to be getting my hands on that and putting it back on the menu as soon as I can.” While Richard admits that “shouldering the responsibility of what comes with running a business is the most challenging” part of his job, he loves the “creative side”, from coming up with new dishes to running cookery demonstrations.

A demo really breaks up the week and keeps me on my toes. It’s enjoyable to have people sitting there hungry for information. There’s a different energy to giving a demo like that compared to our daily routine.

Curious as to how he handles a work/life balance, Richard said: “Generally I’m kind of working about six days a week if not more, so it’s demanding and intense. Balance hasn’t fully come into the equation yet, but we’re working on it.”

Nevertheless, he does have some advice for people considering going down a similar path, saying: “I think if you can put yourself in a good situation where you’re going to learn a lot, it will stand to you. It’s something I always tried to do in the places I worked. Surrounding yourself with a good team is really important so they can help you get the whole thing up and running and share your vision. I’ve found that to be crucial.”

So as we approach the end of the year, I couldn’t resist asking Richard about his plans for 2019. For him, it’s all about “ongoing development”.

We’re continuously trying to build our team and take the catering side of the business, doing more cookery demos and expanding the evening service to more than just one evening.

Well, I know I’ll be excited to see what Richard and the team at Dooks Fine Foods get up to next year.