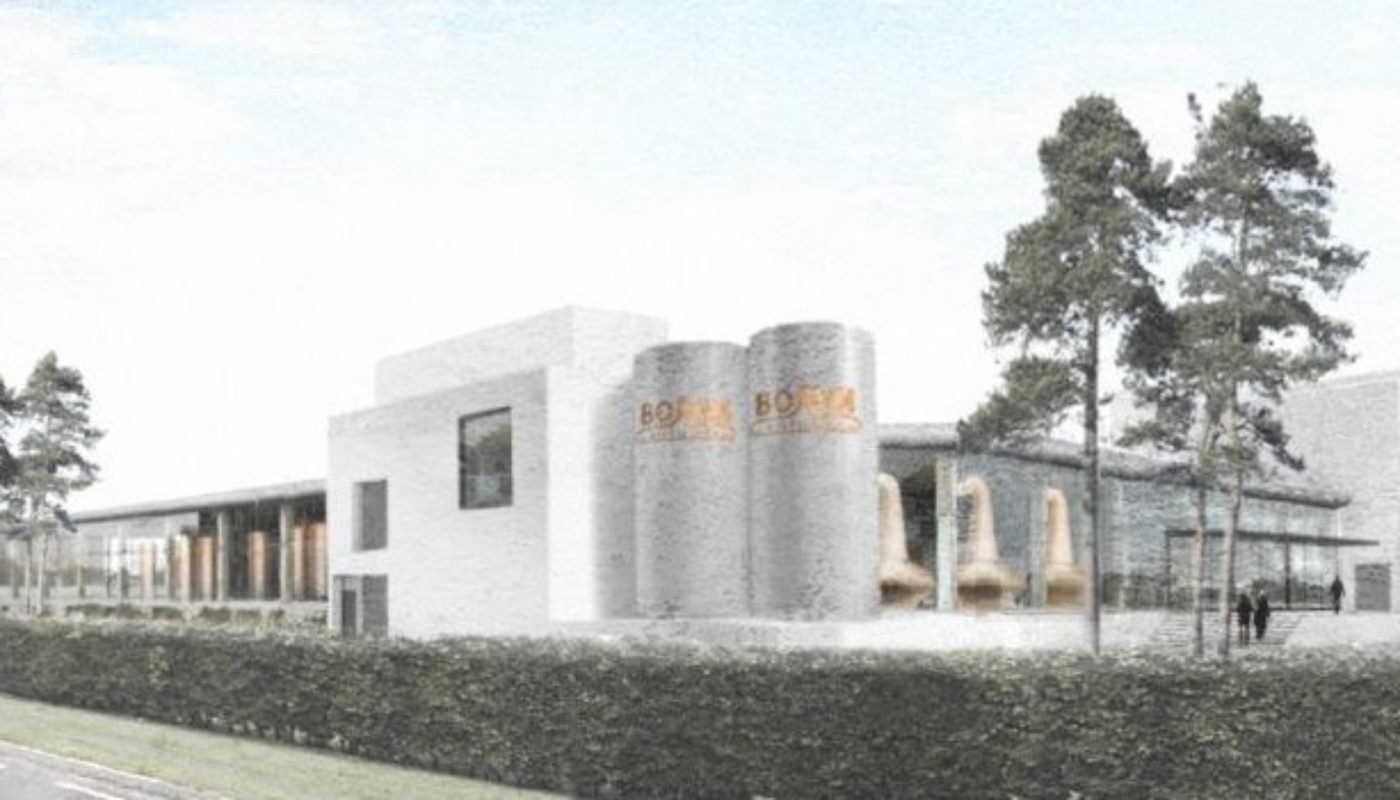 Boann; legend has it that the Irish goddess Boann created the river Boyne. It is her wild nature, her striking boldness that informs their creativity and ambition.

“Born of bravery. In pursuit of excellence. Boann is more than a whiskey. It is a measure. A measure taking inspiration from the past and gathering knowledge from now, to breathe new life into an ancient Irish craft.”

Recently I had the luck to visit one of Ireland’s newest ventures, Boann distillery & brewery. Plans for the future include a visitor’s centre, a quality restaurant, a bar and whiskey snug with around 150 whiskies and a log fire, not to forget a rooftop botanical garden where you can sip your favourite tipple and in the heart of the distillery there will be a log fire with a graduated seating area to bring back old traditions such as storytelling, poetry and music..

There I met Aine O’Hora, their distiller & brewer and Pat Cooney, owner & adventurer. I turned up on a relatively quiet Thursday morning to a big glass building which had an air of intrigue about it, maybe it was the whiskey lover inside me but it felt like a building that was hiding a little not quite ready to show its beauty. Probably because they have yet to pop in their stills that are on route from Italy. I walked into a power cut, not ideal but instead of panic or stress there was an air of calm. It only built on the intrigue for me.

Aine is a woman with a skip in her step. Why, because she has found her dream job back in Ireland with a company or should I say family who share her energy, enthusiasm and hopes for this new adventure.

Hailing from the wild west; Galway she has spent the last eight years in Australia, working as a brewer, a job she enjoyed but Ireland was always calling her back. She studied bio-chemistry at UCD where she got her first taste for brewing. After two years as a chemist she went on to do her masters in brewing & distilling.

She has always loved whiskey and is so excited to be part of Boann, where with the guidance of John McDougall she will endeavour to create quality whiskies. with origin and keeping it interesting, there are so many exciting paths to take, making Boann a distillery to keep an eye on, you sure won’t get bored.

I was in luck that morning as not only did I get to chat with Aine, I also got time with Pat, a man with a warm cheerful & charming presence. He has forged his own successful path in the industry but coming home to the Boyne valley and brining the success there has been a long term dream which he is finally making a reality.

Born in Drogheda, he started his career as an accountant and after a number of years bought drinks distributors Gleesons which he built into a multi-million euro company and in 2012 sold Gleeson wholesale. That morning he enthralled me with his story, as well as the rich drinks history of Drogheda, a town (it has been a city for over 700yrs) that already has a vibrant history.

Once upon a time Drogheda had 18 distilleries but by 1822 only one remained. This sadly closed in 1968. For Pat, a man who enjoys whiskey, beer and wine, (he apparently has a nice vintage port selection) this is not just a distillery or a brewery it is a destination. A place showcasing the best of the Boyne valley and he wants, not only to bring the ‘music of the distillery’ but the music of Ireland and that of the Boyne Valley that he has such a love for, to us. There are so many myths and legends about this area, he wants to bring these back to life too.

For Pat & Aine an important part of the distillery & brewery is to use nothing but the best. The best local ingredient’s the best equipment & technology. Pat is a shrewd business man, he may be spending a lot of money but he sees in the future a family business, one in which everyone is involved in an area of their expertise Thus this dream of Pats, of a family distillery, is brought to life with the help of his beloved wife Marie and his five children, with each taking ownership of an area of the business, and together bringing further life to the Boyne Valley.

Pat has got beautiful pot stills coming in from Italy with nano technology (essentially this will give more copper surface to the whiskey thus giving a smoother whiskey). He also has the Rolls Royce of brewing tanks, and thanks to connections that he forged when he owned Gleesons, he will have the chance to procure some great barrels for their whiskies, while being able to show the world how great Irish whiskey is.

He has also been busy sourcing for grains locally. Thankfully he has his own well on site so they have pure Boyne Valley water for their brews, and being a hard water area this will also lend its personality to their beers & whiskies.

Their specially designed and distinctive nano-copper pot stills and underground cellar will all help to ensure that they produce a whiskey of distinct character with a real sense of place. Like with a winemaker taking care to express their terrior, Boann plan to express the Boyne Valley.

Pat has boundless energy and ideas and together with his equally energised family, (most of whom I’ve met at recent events and are just as excited) want to share this new adventure with everyone. This speaks a lot about Pat as a leader, as everyone I met is as enthused and as determined as himself.

Boann already have their Brewhouse series of beers on the market, and they will soon be launching their first whiskey ‘The Whistler’. Pat loves to whistle, a somewhat lost art he would like to see revived, and according to those that know him he is always whistling and I have to admit he’s actually quite good. They will also have a gin still and with their aim being to make a hedgerow gin, they will go out and forage for it, so every time it will be different.

They will also do seasonal beers and their fist sounds mighty exciting; Winter Solstice. They got an ancient recipe that they will follow on the day the sun shines through New Grange in the Boyne valley. They will first heat the stones in a pit then use these stones to boil the wort.

They currently have three varieties of beer along with their seasonal beers. They are very interested in food & beer matching so they will bottle larger bottles for sharing the way you would a bottle of wine.

This really will be a destination, only the best will do for Boann because they want to give no less to anyone who visits, and I can promise I will be knocking on their doors again.

Boann distillery is on the edge of Drogheda in the Boyne Valley, a minute from exit 8 on the M1. Located in what was once a car showroom, the distillery will shine out on both sides with the three new copper pot stills will sitting at the front to welcome visitors from the M1. The equally shimmering brewing stills will sit on the other side in full view of the road leading from the town itself.