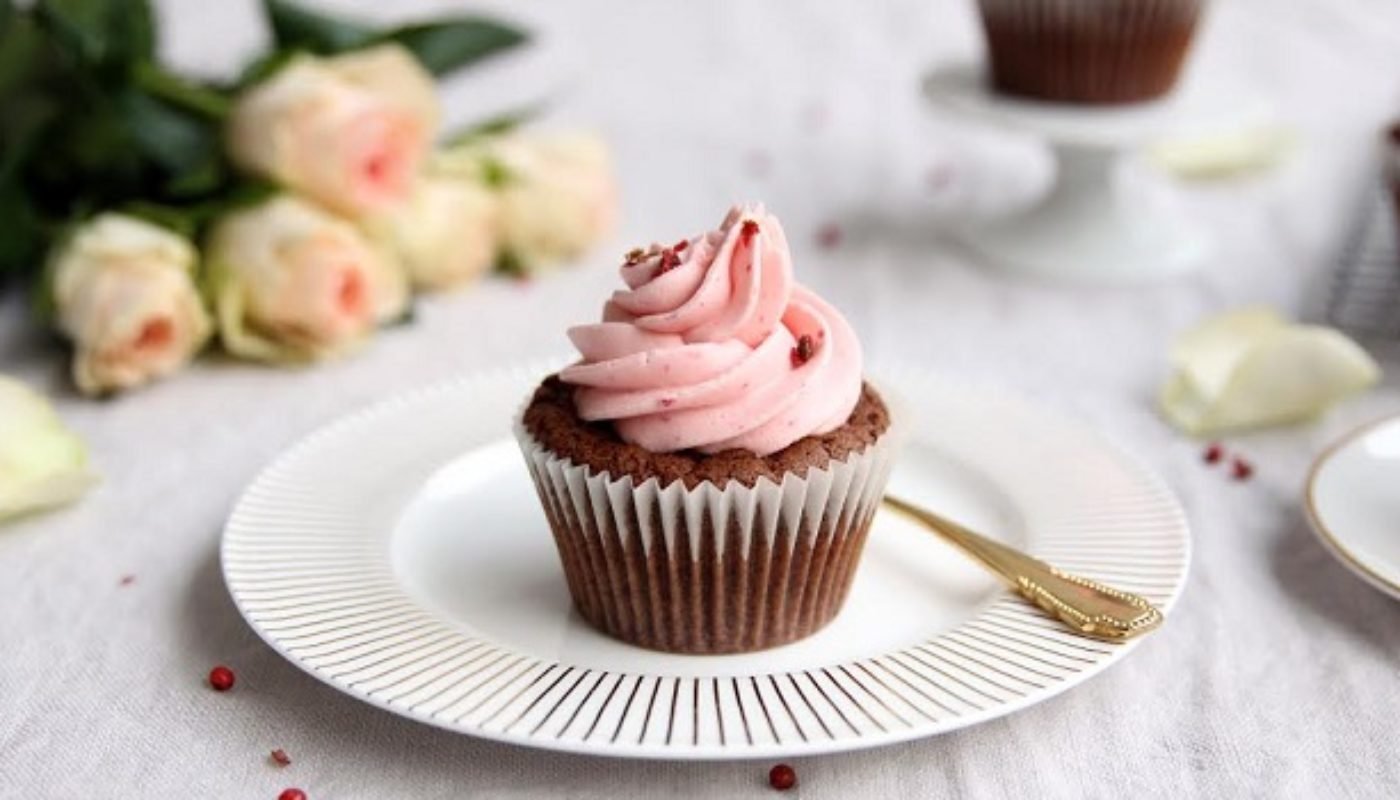 February is synonymous with Valentine’s Day which calls for some romantic baking! Dark chocolate and raspberry are a match made in heaven…here we have spiced up the combination in a cupcake recipe with the addition of some pink peppercorns. The spice adds an interesting little kick we well as being a pretty decorative flourish!

This cupcake recipe makes approx 16-20 cupcakes. Feel free to half the recipe if you don’t wish to devour this many between you and your loved one! 1. To make the cupcakes, preheat the oven to 160°C/315F and line two 12-hole muffin tins with 16-20 paper cases.
2. Place the chocolate, milk and half the sugar in a small saucepan and heat gently, stirring until all the chocolate and sugar have dissolved.
3. Meanwhile beat the butter and remaining sugar in the bowl of an electric mixer until light and creamy. Beat in the eggs one at a time, beating well between each addition. Scrape down the mixture from the sides if necessary.
4. Sift the flour, baking powder and bicarbonate of soda into the butter and sugar mixture and mix gently until just combined.
5. Pour in the melted chocolate mixture and mix again, scraping any mixture down from the sides if necessary.
6.Divide the mixture between the cases and bake in the oven for approximately 20 minutes or until the top of the cupcakes are springy to the touch.
7. Leave to rest in the tray for a few minutes before moving to a wire rack to cool completely (note: tops of the cupcakes sink slighltly on cooling which is normal)
8.To make the buttercream, place the raspberries in a small saucepan with a small splash of water and heat gently until soft. Remove from the heat and mash. Strain through a sieve into a clean bowl, scraping the sieve to get as much of the juice as possible. Return the raspberry puree to the saucepan and simmer gently until the juice has thickened and reduced by about half. Leave to cool and thicken further.
9. Meanwhile, beat the butter and icing sugar in the bowl of an electric mixer for approximately 10mins until light and fluffy. A little at a time, add the concentrated raspberry puree to the buttercream, mixing between each addition, until the desired strength of flavour is achieved. Take care not to add too much such that icing is too runny.
10. To finish the cupcakes, pipe the raspberry buttercream on each cupcake and sprinkle with crushed pink peppercorns!