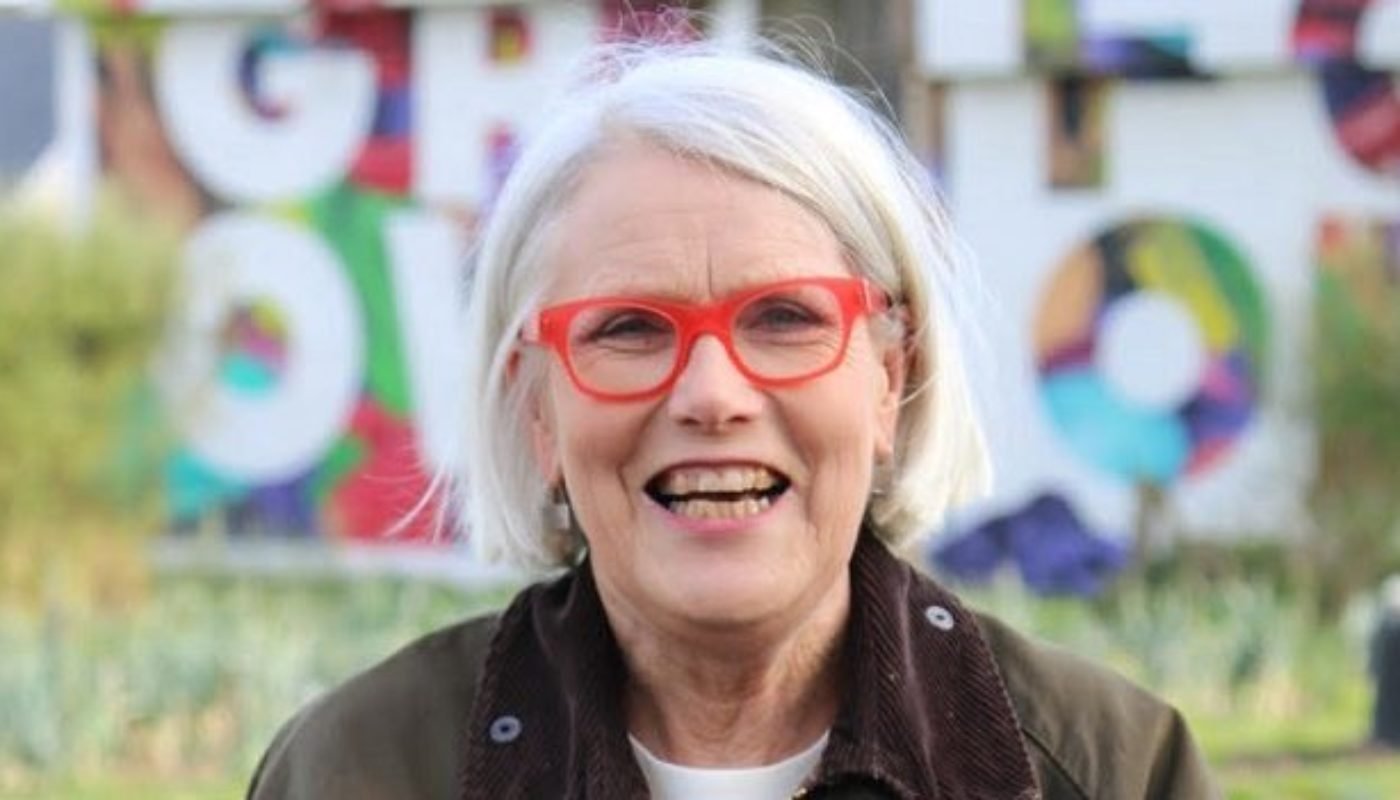 “Hello Ballymaloe Cookery School, Darina speaking. Thanks for telephoning,” Darina Allen reels off. Dynamic, efficient and to the point, the characteristics of this powerhouse in the Irish food industry can be felt even in the way she answers the phone.

Based at the cookery school on a day-to-day basis, despite on the cusp of her 70th year Darina shows no sign of slowing down – if anything becoming even more outspoken in recent years.

Fresh from saying her goodbyes to the most recent group of students on the flagship three-month intensive cookery course, Darina welcomed with enthusiasm another two groups that week as part of a timetable that includes a regularly refreshed range of half day, full-day, and week-long courses.

Sending my greetings from a grim spring day in Dublin, she retorts in jest, “Oh, the sun always shines in Cork!” And so it might seem to those who have never visited Ballymaloe, so often is this point of pilgrimage depicted drenched in sunshine, most often in scenes from LitFest which lights up a food lovers social media timeline in May each year.

A Food and Drinks Literacy Festival at Ballymaloe, to give it it’s full title, rarely needs a formal introduction. Since launching five years ago LitFest has taken a life of its own, bringing the pioneers of the food and drinks world together and as a result quickly becoming one of the highlights of the Irish food festival calendar.

This year LitFest welcomes, among many others, Claudia Roden, Chirstian Puglisi, Jacob Kennedy, Joanna Blythman and Brian McGinn, the filmmaker behind Netflix Chef’s Table – “we’re hoping he might be interested in doing something on an Irish chef on that.”Darina name checks Rene Redzepi, David Tanis, and Alice Waters as some of the other food icons that have visited this tiny corner of East Cork. “Every year there have been extraordinary highlights, she muses.

Hers include Noma’s head chef Rene Redzepi leading a foraging group around the gardens, and from last year renowned Argentine chef Francis Mallmann lighting his open fire in the gardens at 3am and not leaving it until his sold out demo later that afternoon to showcase fire and earth cooking methods. “The person who keeps tells me he is coming is Magnus Nilsson, from Fäviken in Sweden, and Michael Pollan is the other person who keeps saying ‘keep on asking’ me,” says Darina exasperated, but she is adamant their schedules will soon coincide with a LitFest weekend in the near future.

On investigating the suggestion from a friend to host a literary festival at Ballymaloe, Darina discovered to her surprise that there was no other festival anywhere in the world dedicated to the natural pairing between food and literature. “That first was quite accidental really.”

From the outset the goal of LitFest was two-pronged: “to bring the best chefs, authors, food writers and so on from all over the world,” and “to get the word out more and more about what was happening on the Irish food scene; this wonderful renaissance and confidence that is building in Ireland around food.” I had been in the food industry for over 30 years so I was fortunate enough to have quite a number of contacts around the world, so I just picked up the phone and started to invite them. Everyone was very excited and wanted to come. We were very lucky.”

“”We want to bring the very best to Ireland, because a lot of food festivals around Ireland draw from the same pool. We wanted to give Irish people the opportunity to meet some of their real food heroes.”

“All of these chefs and writers all have a pen in their hands too, so were very determined that it would be something of incredibly high standard and that we would give them some delicious food so that when we bought these people to Ireland,” she says adding that the festival has been covered in New York times, LA Times, the Washington Post and further afield.

This year the festival broke ties with the main sponsor Kerrygold, opting to work with “lots of little sponsors” instead, many of whom who have also supported them from the beginning, including Sodexo, Neff and Cully & Sully – co-founded by Darina’s nephew Cullen Allen.

Another change to LitFest 2017 was name of the festival. Darina says the subtle change from ‘literary food festival’ to ‘food literacy festival’ will promote that “we need to be much more literate and educated about what’s going into our food and how it’s being produced.”

The title of the festival has always been a point of concern for Darina. “It’s an incredible gamble when you put on something like this. You never know if it’s going to appeal or not. We realised a couple of months before the opening date that the word literary was putting people off, as they thought ‘oh, that’s going to be too posh for me.’ So we immediately added a fringe element, so that’s in the Big Shed and it’s now throbbing soul of the festival. We wanted to make sure there was something for everybody.”

While there is something for everybody, in the same breath Darina says that LitFest has become increasingly political. This year the entire theme of the festival is ‘Our Responsibility.’

“We really feel we have a responsibility having gathered all these food people from around the world that we need to discuss food issues.”

“We hope to focus people’s mind, everybody from chefs, to doctors, to teachers, to politicians, to shopkeepers, you name it, on how even making small changes in their day-to-day lives can make a huge impact globally on issues like food waste, food security, diet related health issues.”

LitFest has truly taken a life of its own, though long before the idea for the festival was even born Ballymaloe House and Restaurant was a mecca for food lovers.

“Ballymaloe has been going for a long time, since 1964, and they have been writing the menu every day for that length of time. It has always highlighted the very best of Irish produce and cooked it simply; there are no foams; no sous vides; our food is very simple.”

“This is something people talk a lot about now, but very often I don’t think people realise that concept is in our DNA, and it has always been the way here. We don’t boast about it much, it’s just the way it is.”

“People certainly talk the talk, but sometimes they don’t walk the walk.”

While she has been described as the leader of Ireland’s food revolution, Darina audibly cringes at the suggestion, “Well my mother in law certainly started it, I just took over from her.”

“Myrtle was definitely the pioneer, she didn’t realise she was the pioneer but she definitely was. Her legacy is enormous, she influenced generations of chefs, not alone me, and I am just passing on what she taught me and adding to it, Rory and Rachel too.” And what exactly is this food revolution? “The main driving force behind it is the artisan food sector,” Darina explains, “but also as chefs travel they eat all over the world, and it’s then that the penny drops about the quality of the produce here in Ireland. All good food starts with good produce, and it sounds like a cliché but unless you start with fresh, naturally produced food in season it’s hard to make it taste good without lots of twiddles, bows and smarties on top.”

At the recent UCC Food Conference Darin spoke about her vision of Ireland as the ‘Organic Food Nation’; I query whether this is actually an achievable ambition, or just a lofty dream. “Absolutely! All you need is a visionary and an Irish Government who can see that the prosperity of the Irish horticultural industry and indeed our entire nation could be built on this.”

“For most people now food is just something that comes wrapped on a supermarket shelf, and more and more people are becoming interested in knowing where their food comes from. The growing demand is for food we can trust, and if we can say that Ireland is the organic food island, my God, think of that for a marketing slogan!”

While that claim alludes our nation for now, the cookery school still attracts people from all over the world; being ‘Ballymaloe trained’ has become a badge people wear with honour, and having mastered the ‘The Ballymaloe Method’ opens many doors.

“On the last 12 week course there were 13 nationalities, and for the next one we are oversubscribed again, thank goodness. They come here because the school is in the middle of a one hundred acre organic farm.”

“I love spreading the word about what’s happening in Ireland. I could be teaching algebra and geometry, but when you teach someone how to cook or how to sow a seed you give them a gift for life.”

In response to this thirst for knowledge and Ballymaloe Cookery School is introducing a new long course this year for the first time in over 30 years, in Sustainable Food Production.

“We will be able to use all the resources in the farm, gardens, greenhouses as well as the school. A lot of people nowadays want to learn where their food comes from and to take back control of their food production. People will learn everything from how to sow seeds, plant plants, rear chickens, learn about bees, how to make butter, cheese, yoghurt and sourdough.”

Keen to spread her mandate far beyond the gates of Ballymaloe, Darina in the final stages manuscript together for a new book due out this September “on all things growing and cooking”.

“The unofficial title for this, which I won’t be allowed call it, is ‘For God’s Sake, Grow Some Your Own Food!’”

After saying our goodbyes, an image of Darina pops up on my Twitter feed picking sea-kale on the Ballymaloe Cookery School farm, which she served for lunch that day with hollandaise and chervil. Darina Allen might talk the talk, but you can be sure that she walks the walk too.