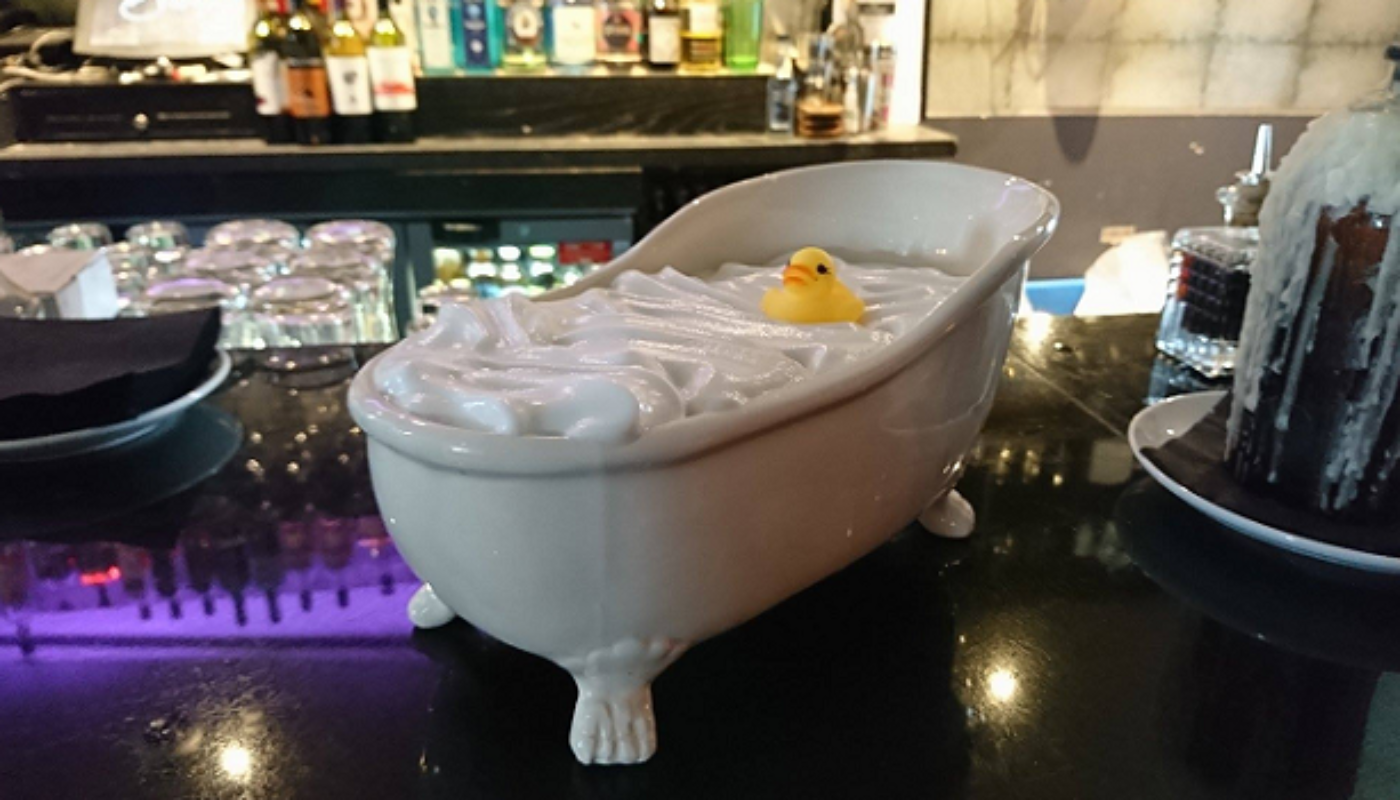 Home » Craft Cocktails: Why so Serious? Great Drinks Can (and Should) Be Fun!

Craft Cocktails: Why so Serious? Great Drinks Can (and Should) Be Fun!

Sometimes craft cocktails can be taken too seriously, but some colour, theatrics and flamboyance can give life and personality to the cocktail experience. This isn’t a new thought process: cocktails from their inception were born from this. At the time, it was all about being innovative and exciting,in fact, the pioneer bartender was a showmen. Forging the classic cocktails and techniques we all know and love, they set the basis for the craft which I hold dear.

Cocktails are serious business, they are an art form, but they can be fun; Tiki cocktails are the poster child for this! In modern bars all over the world, traditional, classic cocktails have taken a massive rise, which is great. But for a lot of palates, some of them are far too strong. These drinks do have their place but finding balance is key: a menu just consisting of quirky, interestingly served tipples won’t work either.

Every drink needs to be well balanced, with something for all tastes, each drink should aim to be an experience. I use the theatrical and quirky serves as moments of flair, these drinks captivate the audience and can create more cocktail sales and even inspire. The creative and fun side can be lost with bartenders and establishments getting wrapped up with serious side of the classics, with the speakeasy bar style becoming one that’s restrictive.

For me, in the undertaking of designing menus for Candlelight Bar, bringing the fun back to cocktails was always a big element. We do have a lot of twists on the classics, but utilising an array of ingredients and creative production methods. Again, taking a classic drink and just adding a bit more fun to it.

The first historically recorded cocktail, is regarded as the punch and records show mention of it from 1632, brought to England in the 17th century by sailors employed by the British east India company. The word punch, its origins can be found coming from Sanskrit, “Panc”, meaning “five”, as the drink was originally made with five ingredients: wine (alcohol), sugar, lemon, water, and tea or spices, with spices at time being the driving force over gold.

For another school of thought, the term comes from puncheon, in reference to the large barrels used to serve the tipple. Punches are the ultimate result of necessity as sailors would add rations to a large vessel to create a palatable concoction. The first known written reference to a cocktail was in a London newspaper in 1798, and was a simple mix of gin and ginger syrup. The first written definition of what a cocktail was, appeared in 1806 in a New York newspaper, “The Balance & Columbian Repository”.

“Cock Tail – a stimulating liquor composed of any kind of alcohol, sugar, water and bitters”. My favourite origins story was the one in which a Saloon owner mixed a tipple (“Bittered Sling”) and garnished it with a cock’s feather. Cocktails should always have a garnish! It’s a thing!

Still to this day the primary goal of cocktails is to be “stimulating” in either its component parts or presentation. The art of bartending evolved thanks to many figures in history but especially to Jerry Thomas. Jerry, aka “Professor” Thomas, an American bartender who worked all over America and Europe and wrote one of the first recipe books: The Bartender’s Guide – How to Mix Drinks or the Bon-Vivant’s Companion, changed the game for bartenderkind.

And Jerry wasn’t a stranger to flamboyance and theatrics, the use of fire and exaggerated techniques for effect and the flavour combinations at the time where trend setting and exciting. The Blue Blazer is one such drink, he was given the nickname “Professor” because of his ability to deal with complicated recipes and put on a show for his customers, and he created the flaming drink while working at a gambling saloon during the gold rush.

The story goes that a patron stormed in demanding, “Barkeep, fix me up some hellfire that’ll shake me right down to my gizzard.” So he proceeded to set some whiskey and boiling water on fire and pour it between two cups as a blue flame. After adding a lemon peel and some sugar, he served it. He continued to utilise and showcase the drink throughout his career to entice, captivate and entertain.

Also, at that time three other factors also aided the development of cocktail culture, artificial carbonation of water, commercial sale of ice and then refrigeration, and these three have mirrored parallel’s in modern mixology and bartending: Think of the development of craft mixers and the growing importance of ice. The old fashioned is considered to be the grand-daddy of the all modern cocktails, the first single serve offering: a stimulating mixture of whiskey, sugar, bitters and water (obtained from ice dilution and or the addition of chilled water to better control dilution).

As cocktail culture has caught on and people have got serious about their cocktails, everyone in part is better educated. And the old fashioned has found a fondness and become staple for many, transcending its historical origins. The use of shaped and large ice, the variety of base spirits and flavoured sugars and bitters and depth changing addition of wood smoke also creates theatre and draws people in (Irish Coffee Syndrome personified).

The Smoked Old Fashioned is one of those drinks that stands very much in its classic roots, but the variant’s in ingredients and the utilisation of smoke to enhance the flavour and raises the presentation to new heights.

I have numerous takes on the old fashioned in my armoury, from my go-to recipe, to smoked variations and twists, but the classics can be shaped into modern, fun, and always tasty versions of themselves whilst still retaining classic structure and character.

The Camp Fire is one such drink, an emotive mix of Bulleit Rye, barbecue smoked salt, homemade marshmallow liqueur, candy floss syrup, angostura bitters, peach bitters and orange bitters stirred down and served with toasted marshmallows and apple wood smoked. Served in a treasure chest adorned with grass and party lights. Well balanced and explorative! Unfortunately, the recipe is one of my many trade secrets, but here’s some one to get you started! 1. Add all ingredients to whiskey tumbler gradually with cubed ice and stir for several minutes until correct dilution and chill is achieved,.
2. Zest orange oils over top and place under dome.
3. Smoke with apple wood smoke. The punch is the original mixed drink, communal fare and comeback kid. The rule of five is usually a good way to keep on track and deliver an amazing taste experience. Base spirits, sweetener, citrus, water (dilution can also come in the forms of juices or carbonated waters etc), and tea or spices.

Punches offer amazing opportunities to be creative with garnishes, punch bowls and serving vessels. They are the ultimate fun and theatrical drink. In Candlelight we’ve several on offer and our two current most popular, have to be the “Bathtub Gin time” for two and “I Would Like A Single Plum Floating In Perfume, Served In A Man’s Hat” for four.

Then we have the “I Would Like A Single Plum Floating In Perfume, Served In A Man’s Hat” a modern lighter styled take on the Fish House Punch, inspired by an episode of the Simpson’s. 1. In a large bowl, add sugar and lemon peels, and rub together to release the citrus oils into the sugar, to create oleo-saccharum.
2. Allow oleo-saccharum to infuse for at least 30 minutes. Dissolve sugar with warm tea.
3. Add rum, cognac, lemon juice, Px and apricot brandy and stir to mix.
4. Add a block of ice to chill, and continue to add smaller pieces of ice for desired dilution. Garnish with lemon wheels, shaped lemon zest and freshly grated nutmeg.

Now don’t get me wrong, I’m not advocating for everyone to abandon the traditional and classics or the stylised way to serve them or the pride in which they take in the creation. But instead, don’t get caught up in the complete serious side of the experience and embrace the art of it.

The modern creative cocktail culture embraces all elements, from start to finish, as all parts make the whole. The utilisation of interesting ingredients and names can also aid in enticing the guests.

A big part of doing it well is the name, great drinks have names that reflect the process and or the serve, the ingredients are of good quality and complement each other. The vessel in which a drink is served also makes a difference, be it a vintage styled glass or ceramic bathtub. Every time I create a serve for a new drink I consider everything and plan it all out meticulously.

My craft stems from an understanding and appreciation for the classics and my understanding of the ingredients I choose to use. I’m a great believer in that you can’t know where you are going unless you embrace where you’ve come from. Practice, experiment, it doesn’t have to be daunting but be willing to learn from the mistakes.
So, keep moving forward but don’t forget to stop and look back from time to time! 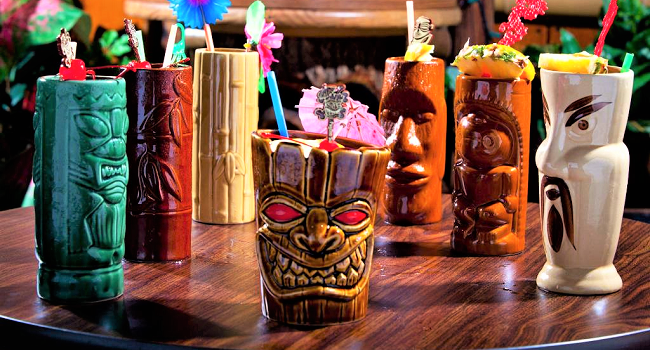 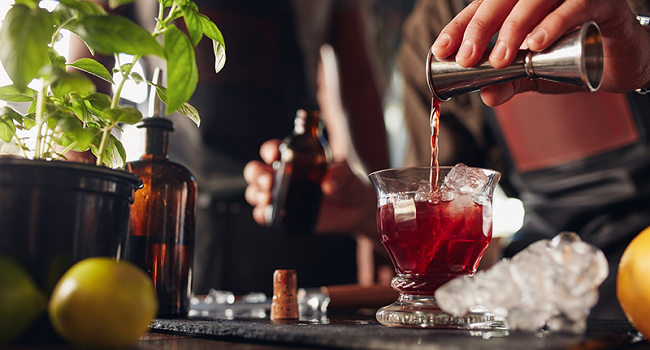 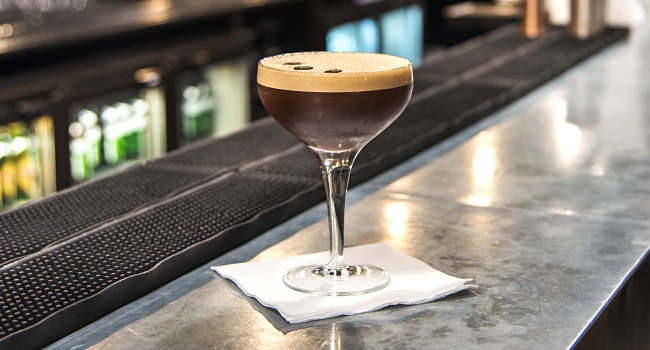