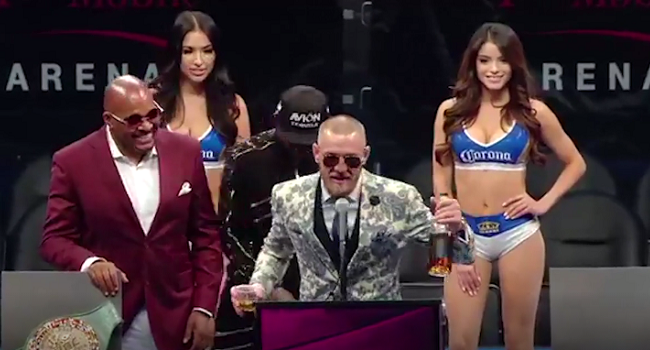 After the longest fight of his career, Conor McGregor took the opportunity to introduce his brand of Irish Whiskey, Notorious, during the post-fight press conference.

“Oh, that whiskey tastes so good,” he exclaimed as he drank and held the bottle on camera promising it will be “coming soon.”

The world famous mixed martial artist addressed his rival, Floyd Mayweather, and told him “it was a good fight” as he shared some insight on their time on the ring, all while holding his lowball glass. He praised Notorious on a few occasions during his speech.

It makes sense for Conor to diversify and after the fight, it has been reported that he could be taking home about $100 million (€83.79 million). And this is not the 29 year old’s first business venture. Earlier this year it was announced that he partnered up with modern American menswear brand David August to launch a clothing line in collaboration with the California-based tailor.

Notorious Irish Whiskey comes in a long bottle with a sleek black label featuring gold typography and an image of a lion wearing a crown.