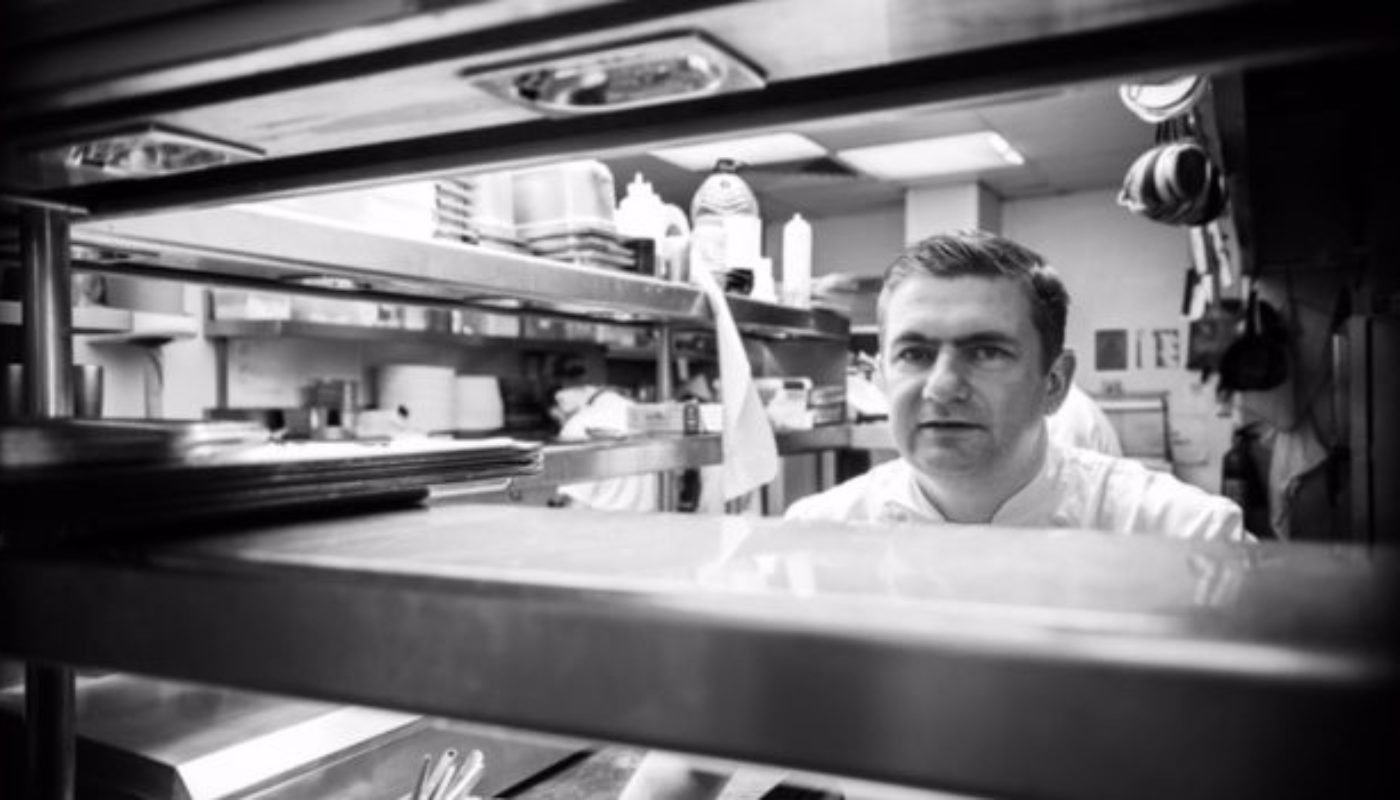 The stellar list of chefs that Peter Byrne has worked with throughout his career is one that has led to his own rise to the top. Now, as he takes over at the helm of the kitchen of one of Dublin’s most-loved restaurants, Hugo’s on Merrion Row, all eyes are on what happens next.

“The team in the kitchen is made up of nine people, including myself. I’m 35 years old and a few guys are around the same age as me, so not necessarily a young team!”, he laughed. “I’ve worked with a lot of them before, in fact most came with me from Restaurant FortyOne, so we’ve all worked together. It was an easier transition that what I’m used to because I knew the guys and had worked with them. The guys know what I want and so they are all pretty comfortable with what direction we are going in.”

Looking back on moves he has made in the past, Peter is able to pinpoint “the big one” and how that shaped the course of his career: “I was in the Morrison Hotel for about a year with Jean Michel Poulot, who was excellent to work for, but Chapter One, which came after that, was the big one. That was the real turning point in my career because while I was there I won the Euro-Toques Young Chef of the Year so that really kick started my career.”

He added: “Working under Ross Lewis and Garett Byrne, who was there as head chef at the time, was incredible. Learning from the two of them was a great experience. It was a big step going from The Morrison Hotel, where I worked in the fine dining restaurant, to Chapter One restaurant. They didn’t have the Michelin star at the time, they got that about two years after I started there.” Learning from Gareth and Ross was brilliant because they really do take the time to show young guys how to prep things properly, how to cook properly and how you treat everything with respect, you know, instead of just cooking it for the sake of it, and they show you really how to appreciate everything.

“The restaurant was a separate kitchen in The Morrison Hotel to the main hotel kitchen. There was about 5 or 6 in the kitchen, but in Chapter One there was double that about 11 or 12 people at the time. I worked in every part of the kitchen and learned everything apart from pastry. I became sous chef there, so that was a great achievement and I was very happy.” Peter was headhunted for Gordan Ramsay’s new restaurant, and first restaurant opening in Ireland, in the then RitzCarlton Hotel in Powerscourt: “I was seven years in Chapter One until Gordon Ramsay’s team approached me to go out there as head chef. I lived out that way, it was only 10 minutes from my house and at the time I had two baby girls and I needed to spend more time at home, so it was a good offer to spend more time at home, but also an opportunity to work underneath Gordon Ramsay.”

I met him [Gordon] a good few times, he’s very down to earth. He is very straight. Any menus I created at the beginning, I had to send them over to England for him to approve with photos and recipes, but after a few months they trusted me and I was able to do my own thing.

Peter explained: “He was only there for a couple of years and then the RitzCarlton changed to Powerscourt Hotel, with Sika Restaurant. That then gave me full control over the restaurant, more or less. It was a great learning experience working under Gordon and learning from him. The main thing I learned from him was when designing dishes, not to get too complicated and to understand that sometimes, less is more. When creating dishes, he was very classical in his ways. If there was anything that he thought was a little bit too much on the plate, he’d guide me in a way to take it off and that the dish would taste better and look better without as much on the plate.”

With a reputation that surely preceded him, Gordon Ramsay must have been a strong personality to work for, even a bit scary perhaps? “He can be scary”, Peter laughed. “In particular, it can be daunting when you meet him first because he’s such a big guy – I think he’s about 6’3. He obviously has a reputation from television as being a tough guy, so that adds to it a bit before you meet him. It is all TV though; he’s actually a very nice guy and very relaxed; I found him to be anyway. However, I don’t think you forget the first time you meet him; it is daunting!” The Sika Restaurant in Powerscourt Hotel won many awards and garnered lots of recognition while Peter worked there as head chef. As he explained, his food philosophy is very simple and something which he has always kept and used in each establishment over the years:

“The food in Sika would have been the same as what I’m doing now in Hugo’s in terms of the philosophy – using as much Irish produce as possible. When I was based in County Wicklow, we were trying to use as many local farmers as we could; we were getting our lamb from Gold River Farms and most of our vegetables were coming from there too. We were also using Wicklow Rapeseed Oil. When we were designing each menu that was the main thing to look at – what was in season from the farms around and our suppliers?”

For Peter, the same applies in Dublin city centre: “When I went to Restaurant FortyOne in Residence, I was more or less able to create the same style that had been out in Sika Restaurant as both of them are fine dining restaurants. I moved back into Dublin just to get back into the mix of things again. I missed the buzz!” Now Peter has moved to Hugo’s restaurant, something he is delighted to be part of: “I moved to Hugo’s about seven weeks ago as head chef. It’s a super restaurant, very welcoming, casual dining but still of a high standard, which we want to improve on more. Once Gina Murphy, the owner, gave me a call, I accepted it straight away to be honest. I was delighted.”

I just felt I could come here and enjoy working here, while also improving things. I have been given the freedom, not to do whatever I like with the food, but to keep it in-line with what the restaurant is and incorporate my own style and philosophy too. It will be a challenge, it’s a busy restaurant, but I will be able to put my own stamp on it.

Speaking about the food, Peter explained: “One of my signature dishes is a seared tuna dish, which I had brought with me from Powerscourt to Residence and now to here. We also have a smoked haddock granddad, which is smoked haddock cooked in milk and then it is strained and the potatoes are cooked in the same milk so they get that smoky flavour and then it is all mixed together. I love cooking fish, I prefer cooking it to meat. There is more of a challenge to it. We do have meat on the menu of course, we have some great dishes with beef, pork belly and we did have venison on when it was in season.”

“Hugo’s food has always been French-influenced cuisine. The food is the same now even though I’ve changed the whole menu already, adding some new dishes and changing others with a little bit more finesse than before; simply refining things a little bit for customers.”

Finally, he added: “I am really happy to be here, I feel really comfortable. A Michelin star isn’t necessarily something that we are aiming for, but obviously like every chef if it happened it would be great – I wouldn’t say no to one – but it is not something we are pushing for. We just want to do good food and keep the customers happy to be honest. That’s the most important thing.”