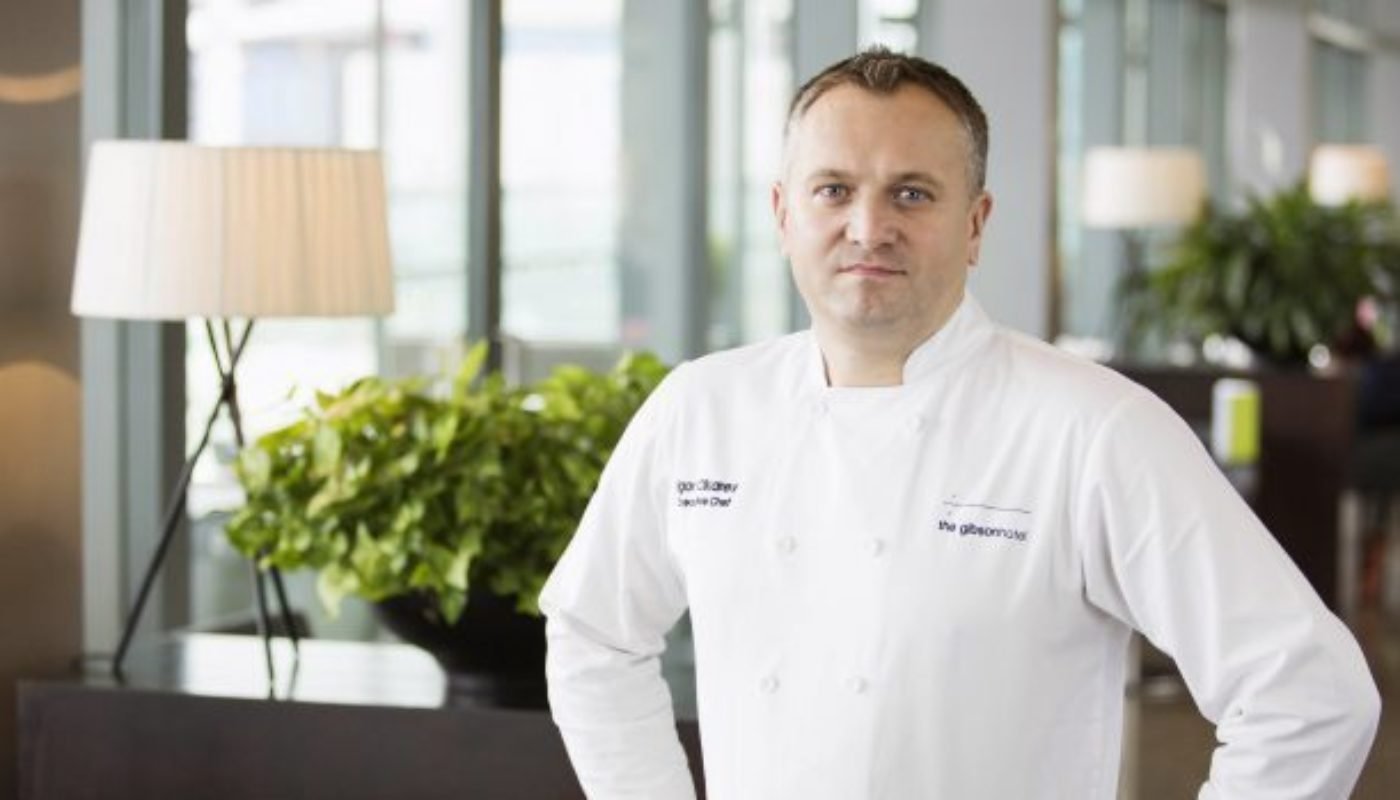 He cooks for many of Ireland’s romance seekers on RTÉ’s popular TV show, First Dates, which is filmed at the gibson hotel in Dublin, the very place Executive Head Chef Igor Cikarev calls home during the working week.

A Russian native from Riga, Igor got his start in the Latvian capital, a place which has “historically benefitted from the cultural and gastronomic ‘waves’ of Scandinavia.”

Following his studies in culinary college, Igor gained his initial experience in Riga’s large city centre hotel, gaining invaluable experience at the beginning of his career:

“It was an important phase in my life; it tested me and confirmed my life ambition. In fact, I realized that I enjoyed working as a cook so much and that it gave me space for creativity. I decided that I not only wanted to stay in this field no matter what, I also wanted to be very good.”

After realising his passion for cooking, Igor continued to gain as much experience as possible, taking advantage of every opportunity that crossed his path, with the most invaluable experience coming from Passage French restaurant, where Igor’s career really began to soar:

I worked my way up to the position of the head chef. I am glad I could have enhanced my qualifications at stays in several top restaurants in Riga. Also, I took the chance to work on the ship just before I came to Ireland in 2001.

Since coming to Ireland in 2001, Igor has worked in several kitchens in Dublin, including the Herbert Park and Clayton Cardiff Lane. Currently stationed at the gibson hotel as their Executive Head Chef, every day is a new experience and presents new challenges for Igor. For him, it’s all about communication:

“Every single day is different to the previous day. It’s all about communication, so as soon as we get all details we get the work done. We have a great management team so it is easier because every manager supports each other.”

I’ve been a chef since I was 16 and no one teaches you how to manage 20+ people. It’s challenging and you need to be a people person, whether it’s your staff or your customers, you need to like to please people.

With two restaurants with very different cuisines, Igor has plenty to keep himself and his team busy. The coda eatery restaurant serves mainly modern Irish cuisine with a European twist, while the hemi bar focuses on pan-Asian cuisine. Despite having a deep love of French and Spanish cuisine, Igor never forgets his traditional Russian and Latvian roots: “I mostly work with the continental cuisine and I do not have to emphasise that I love France & Spain.

“It’s aromas, cheeses, wines and natural gastronomic art serve as an endless source of cooking inspiration. Despite this, I have not forgotten traditional Russian and Latvian dishes.”

Favouring seasonal ingredients for his guests’ dishes, Igor aims to extract the greatest flavour from each ingredient. The team at the gibson utilise a number of Irish producers, including Odaios, Little Cress, Iona Farm, Guinan Farms and much more.

Igor is also passionate about sustainably and ensures this is taking into consideration whenever a new menu is prepared: “My team knows that and we’ll do the menu with each other every three to four months and make sure to keep that standard.”

Currently, his favourite dish on the menu is a short rib of Irish beef with celeriac and potato foam, vichy carrots, pack choi, horshradish powder and chocolate jus.

A passionate chef, Igor loves every part of his job, even the admin and finance, though admits that this can be a “bit boring” but is key to being successful in your job: “Honestly, I love each part of my job and spend a lot of time in the kitchen with the team and on the pass during service time.

“The administration work will take a big part of my day but that is very important for the business to run very smoothly and achieve all the targets. Some of the finance work can be a bit boring, but is something you need to be on top of to be successful in the job I do.”

Working with RTÉ’s First Dates, I couldn’t help but wonder if Igor had any particular insights into the eating habits of nervous daters on the hit TV show:

Because the show gets great publicity, we get daters from all corners of Ireland. I always find it amusing when I serve something different on the menu, something a little bit outside of people’s comfort zones. The reactions can be great and I’m really looking forward to tuning into the show when it airs in early 2018 – it will make great viewing. Speaking about the menu on offer during the show, Igor said: “We’ve got a shellfish dish, which is a native Carlingford Oysters. The oyster is cold and has an Asian feel to it with a really simple spiced coconut cream sauce, lychees and passion fruit. Just really simple things, but at their very best.”

“We’ve got a lovely dessert, a raspberry and white chocolate heart which was an absolute best seller. So, it’s all great to harness the ingredients of the season and it’s something I’ve always done but I do it much more now.”

Wondering if there are any popular dishes on the menu for a date, or certain ones people avoid, I made sure to ask Igor about the food he cooks for prospective couples (for the good of the country’s dating hopefuls of course!):

“Honestly, there are three dishes which are the most popular: a 21-day-aged Rib Eye Steak, a Sea Bream dish and also the Black Angus Burger.”

Making something popular is never the primary motivation when I do a dish, it just happens naturally. Inspiration always starts from an ingredient. We use modern techniques but we always use the world as a larder.

Obviously working with the restaurants in the gibson and providing the food for First Dates Ireland, Igor finds that he sometimes struggles to achieve a work/life balance. Any free time he does have, he spends with his family: “I spend a lot of time at work. The day starts from early morning and finishes late depends of the business level and concerts as we are beside 3Arena and getting a lot customers dine with us before the show.”

He adds: “At home I do spend my time with my family and kids. I have two daughters, 6 and 12 year’s old. So they need a lot of attention and entertainment.”

With long hours and minimal free time, the life of a chef is notoriously demanding. So what would someone need to become a chef?

Igor offered his advice, saying that while a passion for cooking, comradery among your team and a willingness to learn are obviously important, whether you will succeed or not all comes down to hard work. This is paramount: “It’s all about the hard work and without that strength you will never progress. During the start of my career I was working in a kitchen washing dishes, which I did for a while, but I really enjoyed the comradery of being in the kitchen.

“I enjoyed the dynamic of people coming in and the relationships which were quickly formed between front of house staff and the customers. I was quite mesmerised by it. Once I realised it was something I could do as a career, I took it very seriously from that point.”

While he lives and works in the food industry, Igor still likes to sample all of the country’s culinary offerings, and has been particularly impressed by three restaurants recently:

“I love to dine out and I try to visit all the newest ventures. I’ve been very impressed by restaurants like Locks, Mr. Fox and One Pico. I think they will deserve to get a Michelin star in the near future.” Looking towards the future, Igor still has so many plans for the gibson hotel and is currently working on a new menu for January and February 2018.

He recently visited San Sebastian Gastronomika Congress and is planning to implement some of the new ideas through the food offering in the hotel in the near future.

“Also I have visited Nerua, one of the best restaurant in Bilbao, located in the iconic Guggenheim museum where I’ve met an award-wining chef Josean Alija who worked in El Bulli under Chef Ferran Adrià.”

This is a career for continued learning and experience and despite all of his, Igor believes that “there is a long way for me to go and I’m really excited about that journey”.