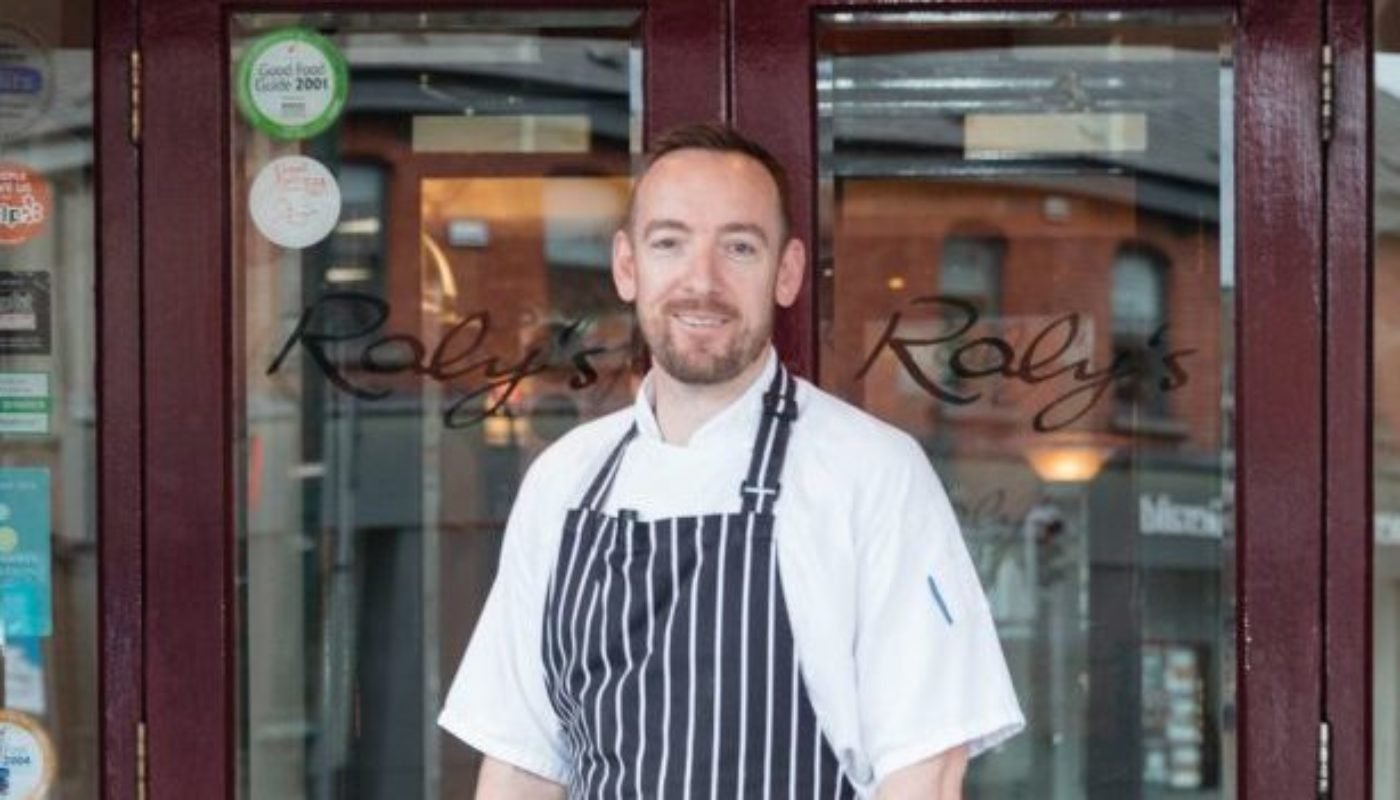 It’s a busy Thursday lunchtime in Roly’s Bistro in Ballsbridge and I find myself struggling to find somewhere to sit. I’m here to speak with Head Chef Hughie Hyland and I’ve arrived right in the middle of the lunch rush.

I had been here a few days previously speaking with the chef, but due to a technical difficulty with my recording device, part of our interview had failed to record. Despite his busy schedule, he graciously made time for me to come back in to gather the rest of the information I needed.

As we sat opposite each other in the only quiet corner of the restaurant, I got stuck into asking what made Hughie decide on the food industry as a career.

For him, there was never any doubt in his mind. Once he caught the cooking bug as it were, there was no turning back: “I was interested in cooking from a very young age. I took up Home Economics in school and had a real love and passion for it, so much so that I left school at 15 after my junior cert to pursue it.”

You realise at a young age that it’s long and unsociable hours, but it was worth it.

After a stint in London and gaining a lot of experience in Dublin, Hughie made the move to Roly’s Bistro. Reflecting on how the restaurant has changed over the years, he explains:

“Back then it was a little bit different. There were two restaurants on two different floors, whereas now we have a café on the ground floor and the main bistro is upstairs.”

“We have 22 chefs and we do breakfast, lunch and dinner seven days a week so there’s plenty going on. There’s even office deliveries, takeaways and so forth, so the business has changed totally with the café coming on board.”

Describing the food on offer in Roly’s, Hughie says: “The food down in the café is more relaxed. You can come in and have a bowl of soup and a sandwich and at night, you can have a burger, fish and chips or a simple steak.”
In the café, there are also a number of sandwich specials and different salads. Hughie notes that “the customers tell you what they want and there are a lot more healthy and vegan options now. They’ve become very popular”.

Up in the restaurant, we focus on what’s in season and specialise in seafood and in Hertford beef. Our butcher’s block menu will give you a few cuts of beef, from prime to fillet, sirloin and cote de boeuf, so that’s obviously a huge draw for people who are into their seafood and their steak.

While it’s great to change things up regularly to keep people interested, especially those popping in on a regular basis, Hughie says there are certain items on the menu that are consistently popular:

“There’s certain things that can’t come off the menu like the traditional lamb Kerry pie, which has been on offer since we opened. The Thai spiced fish cakes are a real crowd pleaser. People love them, so why would you want to take them off when people love them?”

A fan of comforting foods, Hughie loves this time of the year. If you’re in Roly’s over the festive period, be sure and try the braised beef cheeks bourguignon style and “beautiful venison from Wild Irish Game“. Great food is often created by utilising excellent produce and Hughie says that “we’re spoiled to have some great suppliers, we use a lot of Burren Smoked Salmon and shellfish from Castletownbere. They also use Pallas Foods for a number of other products.

This time of year is fantastic because you have an abundance of fresh ingredients.

If someone put you on the spot and asked you about the part of your job that you love most, could you name something? While most of us may struggle to pinpoint one exact part that we love, Hughie didn’t even hesitate, explaining:

“I love nothing better than to get behind the range. I love what I do, I love cooking. Down in the basement is the engine of the restaurant where everything gets prepped on a daily basis, from the fish and meat to the soups. So, you’ll find me down there and it’s where I’m happiest.”

With that much love for a job he’s had so long, something I find admirable, I press him to see if there’s anything he hates. There isn’t, but he does admit that “the breakfast and brunch shifts are the hardest in Roly’s, the reason being that it’s so busy. Once the doors open, it’s basically a non-stop service, so it can be a bit tiring.”

But a busy restaurant is a good complaint to have these days, especially with the current chef shortage in the food industry. Luckily for the team at Roly’s, they aren’t suffering too much due to their core team of longstanding chefs.

We’re very lucky to have a team like we have, there’s a nucleus of 8-10 chefs that are here going on 10, 15, even 20 years. So we’re very lucky because in some restaurants in Dublin, they struggle to have that and hang on to chefs for a long time.

“Commis will always come and go, but recently if there any kitchen porters here that have expressed an interest or flair for cooking, I take them on and it’s worked quite well for us.”

Hughie has racked up 20 years at Roly’s and experiences in London and Ireland before that, so it puts him in a pretty good position to offer advice to any young chefs.

Asking if he had any advice for aspiring chefs, he replied that, for him, “you’ve got to be prepared to work hard. Get yourself into a good kitchen under a good chef. If you listen and work hard, you should reap the rewards.”

Hughie began his career in the food industry at the age of 15. Looking back on this time compared to now, he admits that “you do see less young people coming into the industry now because of the hours.”

Starting off it is tough, but I suppose it’s a bit of a labour of love and I’m blessed that I love what I do. I wake up in the morning and I love coming into work.

As a chef, it’s good to know what your colleagues in the industry are up to, but more than that, eating out in restaurants is a great way to relax and unwind, whether you do it for a living or not. I imagine Hughie and chefs like him might jump at the chance to have someone else cook for them.

“We recently went to Locks for dinner and that was fantastic. They do a chef’s tasting menu on a Tuesday which is brilliant.”

He also praised Richmond and Clanbrassil House and maintained that “it’s good to get out and see different sort of styles of cooking and have a bit of down time”. He’s even gone for dinner in Roly’s, which I think must be quite a funny feeling, but “it’s nice to be on the other side every now and again”.

Though he might like a night off here and there, cooking is Hughie’s passion and something he would never want to give up, even during the festive season.

We don’t usually have Turkey in our house because by Christmas, I’m sort of sick of it. So we tend to have fish and this year, we’re having Beef Wellington, which I’m really looking forward to.

Looking to the future and Hughie and the team at Roly’s are hoping to “keep on pushing and not to get stale. We’re always looking towards new menus. We work seasonally here, but there’s always fantastic offers and deals, so the important thing is to keep yourself fresh and have some new ideas for new dishes.”

With that, I let Hughie return to his busy kitchen, the place he’s happiest, and I proceeded to grab a sandwich in the bustling restaurant.

Nice people coupled with tasty food and great service is why Roly’s Bistro has been around for so long and become a staple in the heart of Ballsbridge. As I leave the building, there’s still a steady stream of people coming in for coffee and takeaway lunches. Looking at the crowd, I think Roly’s will be around for years to come yet.