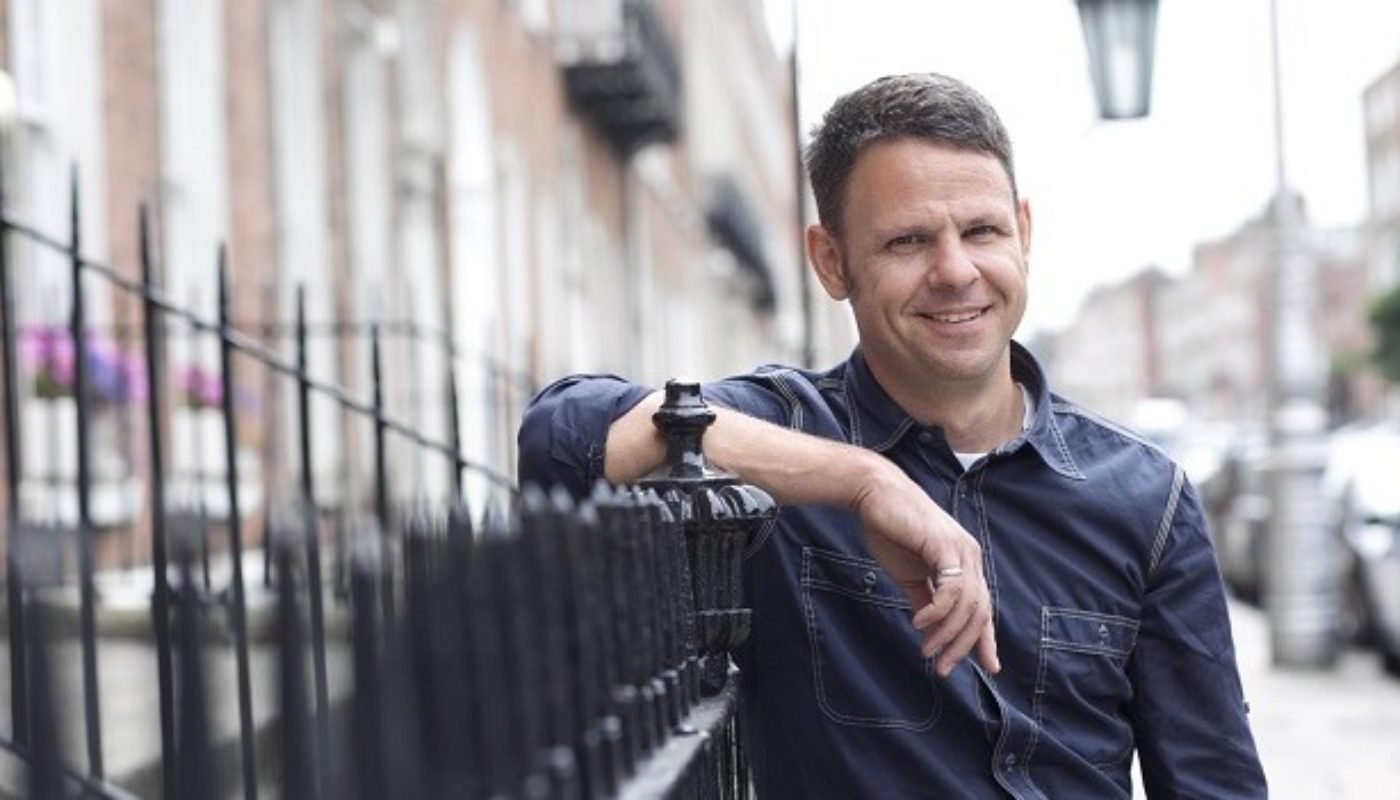 Home » Chef Cathal Armstrong Interview – Born in Ireland, Made in the USA

Chef Cathal Armstrong Interview – Born in Ireland, Made in the USA

“The time I was standing in my bar with the President Barack Obama, and the First Lady of the United States, raving about their anniversary dinner, which I had just cooked them,” says chef Cathal Armstrong when asked to choose among the many ‘pinch me’ moments of his illustrious career. And although he says he that he “just got lucky”, since moving to the states in 1990 Cathal’s hard work, talent and passion have led him to cook for the last two US presidents, Hillary Clinton, Ted Kennedy, Tony Curtis, and Christina Aguilera, among countless other heavyweights of both Hollywood and Washington. Though, he adds, he’s still waiting for Bono.

The owner of Restaurant Eve and a number of other eateries in Virginia, just outside Washington DC, Cathal is at home in Ireland this week as one of the Homecoming Chefs at this year’s Taste of Dublin festival, where he will be cooking some of the dishes from his cookbook, My Irish Table: Recipes from the Homeland and Restaurant Eve. “One of them I was preparing at home when they called to let me know the president was coming to visit the restaurant,” Cathal notes.

Taste of Dublin certainly will be a homecoming for the chef who has been settled in America for the last 26 years, and become one of the most sought after chefs in the region, all through the power of his contemporary interpretations of traditional Irish dishes. Born in Dublin in 1969, Cathal grew up in a family that for the time, when most other families stuck to the usual meat and two veg, put an unusual value on food, cooking, and travel. “We were a food family, we lived for breakfast, lunch and dinner and a little swimming in between,” says Cathal.

His father’s job as a travel agent and keen interest in gardening meant Cathal was exposed to quality food, cuisines and cultures from an early age. Greece, Spain, Portugal, and Tunisia were unusual holidays destinations in 1970s Ireland, but these experiences as a child helped Cathal develop an appreciation of gastronomy that continues to influence his culinary style today.

He began studying computer programming at university, but when a cook fell ill at the local pizzeria where Cathal washed dishes, he stepped away from the sink and up to the stove, and has been there since. Emboldened by his time flipping pizzas, aged 20 Cathal opened his own fine-dining French restaurant, The Baytree. “The restaurant in Dublin was good, but from a business perspective it was a disaster,” Cathal admits. Though the experience was formative time for the business man that he has become.

“I learned everything not to do. Don’t hire your friends, don’t drink all the booze, don’t open a restaurant when you don’t know what you’re doing…”

Just two weeks shy of his 21st birthday Cathal moved to the States with a plan to “earn some fast cash and get out of the restaurant business”, before heading back to attend culinary school in London. But, with the luck of the Irish, he landed a green card in the visa lottery, giving him the opportunity to continue to hone his craft Stateside, most notably at Vidalia, a high-end restaurant in Washington where Cathal says he was given an “education” in serious cooking.

“The first thing I learned at Vidalia was that I knew nothing. I had already been cooking in restaurants for about 4 years but it was amazing how little I knew. The boss was a monster, he hammered an education it to me.”

His monstrous qualities aside, the same boss saw something in Cathal, allowing him to work his way up the kitchen ranks and offering him the head chef job at Bistro Bis, a landmark restaurant on Capitol Hill. There, a favourite haunt of the lawmakers and lobbyists of Washington such as the late Senator Ted Kennedy, who Cathal says he cooked for at least 100 times, his talent caught the eye of several investors. In 2004, with his wife Meshelle Armstrong, Cathal opened Restaurant Eve, a simultaneously stylish and cozy 100 seat restaurant, that includes a 34 seat tasting room, located in Old Town, Alexandria.

Not just a talented and charming chef, in a land obsessed with power and money, Cathal has proved to have a steely business sense too. The Armstrongs and partner Todd Thrasher own and operate Eamonn’s A Dublin Chipper, PX, the upstairs speak easy lounge and the historic eatery; The Majestic, all within five blocks from Restaurant Eve. Further afield in Virginia, there’s also gastro pub Virtue, a food retail palace Society Fair, and second location of Eamonn’s; all part of the Eat Good Food group, that has an annual turnover of around $10m and employs almost 150 staff.

Now based outside the heart of America’s political hub, Cathal’s cooking still attracts the rich and famous. At the Majestic, Cathal hosted a fundraiser for Barack Obama during his presidential campaign, and Michelle Obama came back to eat there once she was First Lady. Though be it a president or a punter, Cathal says that hearing from someone that they have “just eaten the best meal of their lives” still gives him a huge thrill. Despite his success, Cathal continues to work at Restaurant Eve almost every week, 6 days a week, doing 12-14 hours shifts. “For me, it’s very important to maintain a hands-on approach.”

At each venue Cathal draws from his Irish roots, in some places more obviously than others; Eamonn’s is an Irish gastro pub at its best, the menu is complete with fresh fish and hand-cut chips, mushy peas, and an Irish B.L.T. made with brine cured pork, which Cathal says essentially is a spin on an Irish favourite – the rasher sandwich. Even at Restaurant Eve Irish ingredients are intertwined in the modern American dishes Cathal has composed. “We use tons of Cashel Blue and Kerrygold like it’s going out of fashion,” says Cathal. “We use Cashel Blue on the cheese board, and we make a terrine out of it with walnuts for a salad. Kerrygold is the only butter we use for cooking!”

Mostly Americans still think Irish food is corned beef and cabbage, the Murphy burger and boil the bejaysus out of it. Friends that visit Ireland are always very surprised by how good the food scene is.

Along with a love of Irish food, growing up in Ireland has instilled in him the importance of organic growing and sustainability. “We grew as much as we could in our garden at home. The freshest of food, off the vine straight to the dinner plate has the most flavour. Ireland’s leadership in climate and sustainability is something we should all be proud of.” He plays a big role in the local food movement, and his love of horticulture is evident on his menus.

Behind Restaurant Eve he has created an organic garden with a natural rain water irrigation system. Seasonal fruits, vegetables and herbs from his garden are used and supplement the top quality ingredients handpicked from a network of suppliers to create delicious dishes that are designed to ‘nourish the palate’. “We change the menu at Eve every day, depending on what we get from local purveyors of the best ingredients.”

In the Armstrong household Irish chocolate, Tayto crisps, and the aforementioned Kerrygold are staples, with the latter often enjoyed smeared on slices of batch loaf that Cathal makes at his restaurants. Though on his once a year trip home, coinciding this time with Taste of Dublin, he seeks out some of the Irish ingredients he struggles to get in the US. “We all love prawns, oysters, lobster, and especially plaice. Irish beef and lamb, especially lamb, I never get any in the States. We’ll bring back a big haul of Cadburys too.”

His wife’s Filipino heritage has influenced his cooking too, and at Restaurant Eve he serves a $65, family-style Filipino tasting menu. Filipino cuisine will feature too, along with food from Thailand, Korea and Vietnam, on the menu the Asian restaurant Cathal is planning to open in 2018, the first D.C. project for the Alexandria-based restaurant group. “We are also working on a rum distillery in DC and a bigger school lunch project which I’m very excited about,” says the chef of the other projects he has simmering, the latter referring to a project he is undertaking his non-profit company Chefs as Parents, that will partner with The Alexandria public school system to improve the school lunch system.

Despite his international influences when quizzed on what food trends he thinks will be the next big thing Cathal proudly exclaims: “Irish! It’s time for people to start embracing how fantastic Irish cooking is!”

Cathal Armstrong is one of the Homecoming chefs (with thanks to Chill Insurance) at this year’s Taste of Dublin festival, sponsored by Electrolux. Cathal will join a line up of some of the top Irish chefs making waves abroad, including Anna Haugh, Robin Gill, Patrick Powell, Stuart O’Keeffe and Simon Lamont. You can catch live demos and exclusive workshops with some of your favourite chefs throughout the 4 days of Taste of Dublin (Thursday 16 – Sunday 19 June) at the Electrolux Taste Theatre and Taste Chef Secrets.