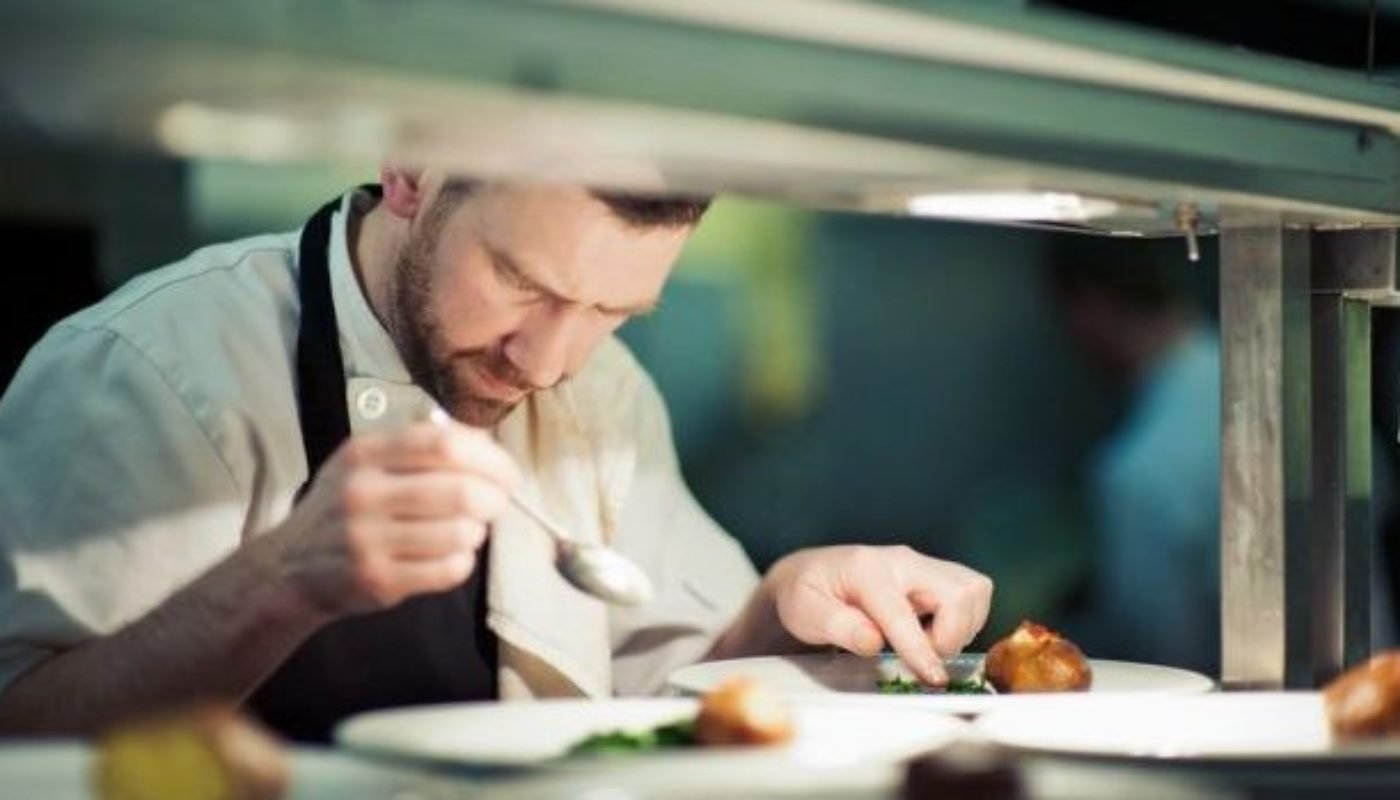 Passion, dedication and a healthy dose of ambition are just some of the ingredients needed for a successful restaurant. Chad Byrne, head chef at Danú at the Brehon Hotel in Killarney, has won two AA Rosettes with the restaurant thanks to these ingredients and more.

A father of three, he is very passionate about teaching his craft and volunteers in local schools in the Munster area. He also enjoys a bit of gardening when he isn’t working.

But things didn’t just work out perfectly for Chad and a lot of hard work went into building a successful career. Chad, who left school at 15, started out in the food industry as a kitchen porter in a local Chinese restaurant.

The Ready Steady Cook obsessed teen found his passion and his first break in the kitchen at the Merrion Hotel.

The very first time I walked into the Merrion Hotel kitchen was the biggest eye opener for me as a young chef. From working in a back street Chinese to going into a kitchen like the Merrion was just incredible.

He continues: “How they present food, how they worked, their work ethic and the pure adrenaline of the kitchen. It was the biggest learning experience I’ve encountered to this day.”

The man who took the chance on him was Executive Chef Ed Cooney, and he laughs when describing his meeting with the award-winning chef:

“I was watching Ready Steady Cook a lot at that time, so when the Merrion was starting to open I applied for the job and wasn’t expecting to hear anything about it. I remember Ed Cooney asked me what my inspiration was and I was telling him the chefs from Ready Steady Cook and that I wanted to be like them. I’ve come a long way from where I started.”

Because of  his journey up the ladder, Chad is a fan of the underdog, saying: “I love the underdog in people because I’m a bit of a rough diamond to be honest.”

Following his stint at the Merrion, Chad worked in the Killarney Park, the Clarence Hotel,  and Mount Juliet hotel, along with a number of restaurant in London, France, Australia and America.

The Dublin native eventually found himself back in Killarney in Danú at The Brehon Hotel. Despite working all over the world he “jumped at the chance” to return to Killarney because “it’s a great spot”.

The food in Danú has won 2 AA Rosettes and Chad describes it as “up-to-date, fresh, seasonal, and uncomplicated”. For him, “flavour is priority. I love the food we cook, my heart is in the food that we cook and I’m very proud of the food here.”

His favourite dish currently on the menu is a Pan Fried Seared Turbot with some Chanterelles, Grilled Octopus and a Watercress Oil.

The dish is a bit of “a one-pot wonder” and Chad loves it because “of how simple it is”. Speaking with such passion for the food he cooks, his ability to make things looks effortlessly uncomplicated is where the real skill lies.

With this passion and determination, it may only be a matter of time before Chad and Danú claim their third Rosette: “We only applied for the AA Rosettes there recently so to get two was amazing…we’re delighted with our two Rosettes but am I happy to rest on two? I suppose not really.”

So what will be the secret ingredient to success in terms of three Rosettes? Chad believes the secret is consistency: “Everything is relying on consistency. It has to be consistent. We can only do what we can do because we’re a busy restaurant, but for me to get there would mean having a full and happy team with everybody being trained the way they should be, because when the food is right it’s perfect. It’s just the consistency and managing that consistency.”

Helping to achieve the optimal consistency are a number of local producers, including Spillane Seafood and Eve’s Leaves. Spillane Seafood has “the best smoked salmon in the country – it’s unbelievable”, while Eve “does herbs that I’ve never seen or heard of before and she’s become an institute”.

The producers do more than just supply products to the restaurant. Spillane’s Seafood have bi-monthly fish masterclasses with the team, while Eve helps maintain the restaurant’s garden every month:

It’s great to get the whole team out and involved in cooking, not just in the kitchen but actually involved in where the food comes from.

For Chad, the best part of his job is seeing someone who started work with him progress up the ladder and come up with creative new dishes:

“There’s no better feeling than seeing the team progress. If somebody started with me and you see them slowly rise up the ladder, asking about new dishes or ingredients, and cooking well with passion. There’s fire in the belly and there’s no better achievement than that.”

Working with a lot of young chefs and with his own journey as reference, Chad has some important advice for those starting out:

Chad likes to relax and unwind with some gardening, though he laughs at the mention of the hobby: “I’m not at retirement age yet, but I do love gardening”. He’s also fond of the odd pint when he has the time.

When he’s not working at Danú, Chad is off trying new food from his peers around the country. One restaurant that’s particularly impressing him at the moment is The Greenhouse in Dublin:

“I’ve had the best meal of my life in there and I’ve eaten in 3 and 2-star Michelin restaurants before. I just think the food and flavour combinations are unbelievable.” Chad seems well set for the future and is helping Danú continue to grow by effectively embracing social media, something not everybody is willing or able to do.

“If you don’t tell anybody what you’re doing, how are they going to know? I enjoy the social media aspect of my job as I love photography and I’m proud of the food we do, so I’m proud to show it off.”

If you want to taste some of Chad’s culinary creations, be sure to visit Danú at the Brehon in Killarney, Co. Kerry.