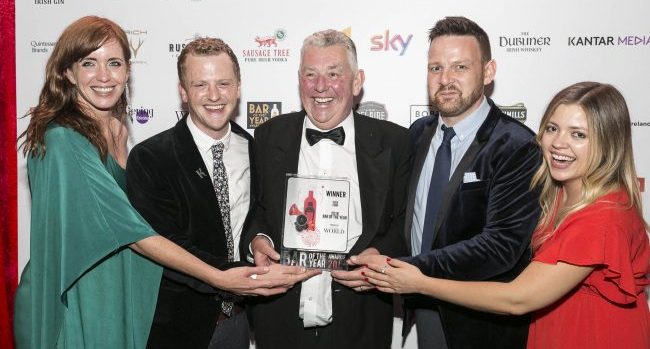 Speaking about the awards, Andy Ferreira, manager of Cask, said: “I’m thrilled for everyone involved in Cask. We’re incredibly passionate about what we do and winning these awards is reward for a lot of hard work. Cork city is really buzzing at the moment; there’s such a great variety of places to eat and drink and the service you get is so genuine and unpretentious.” He added: “Winning Cocktail Bar of the Year for a second year running is an amazing feeling. When you do four drinks’ menus a year and really immerse yourself in seasonality, it’s an incredibly rewarding way to develop drinks and menus. We keep pushing ourselves to be better with every menu.”

Cask has been wowing the public and hospitality industry alike since opening in February 2017 thanks to its cutting-edge, seasonal, nature-led drinks menus, designed by manager and accomplished cocktail master Andy Ferreira. Andy and his award-winning bar team, which includes this year’s World Class Irish Bartender of the Year winner Carl D’Alton, have a strict ethos of basing their cocktails around the wild ingredients that grow in Ireland. Sloes, elderberries and rosehips feature on their soon-to-be launched autumn menu. The team has built a reputation for producing the most creative and innovative drinks’ menus in Ireland.

The local ingredient concept is carried across to the street food-inspired, tapas and small plates food menu at Cask, which is designed by award-winning local food devotee, chef Bryan McCarthy. The judging process for the Bar of the Year Awards 2018 involved a first round of reviewing and scoring of entries by an expert judging panel, who then conducted a second round of on-site inspections of the shortlisted finalists.

Cask is located at number 48 MacCurtain Street in Cork city’s Victorian Quarter, next door to Hotel Isaacs and Greenes Restaurant. Cask is open seven days a week, with the kitchen open Monday to Saturday from 5pm until 10.00pm daily and on Sunday from 1pm until 10pm.