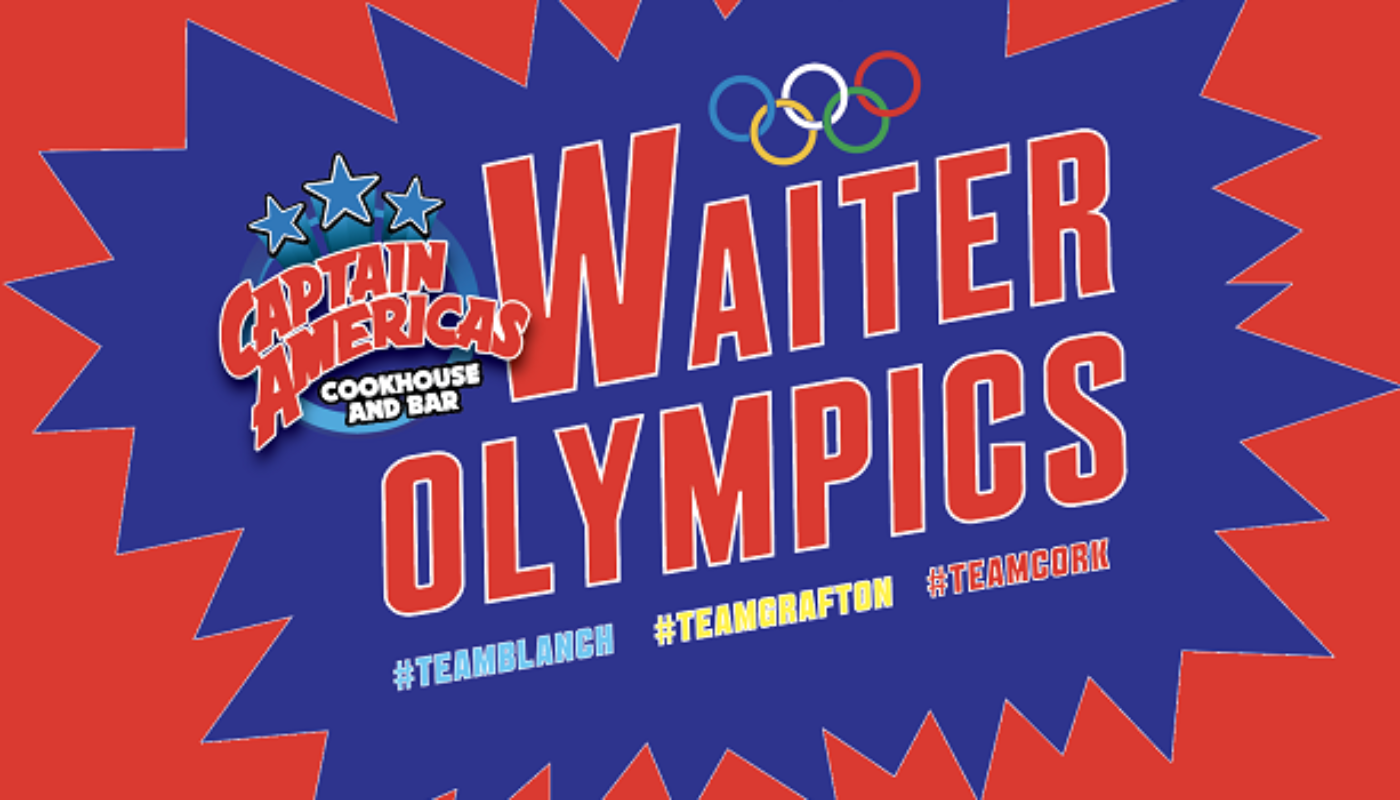 The 2016 Olympics are here and instead of hitting the Copacabana, the staff of the three branches of Captain Americas are bringing the spirit of Rio to Ireland by hosting their very own Waiter Olympics, and the best thing is that the competition is going to be great craic for customers. Here’s how it works:
Staff delegations from the restaurant’s three branches -Cork, Blanchardstown and Grafton- will participate in a series of challenges.

The Round One Heats take place on 11th August in Grafton St and Blanchardstown and on 12th August in Cork. You can support your favourite branch with the hashtags #TEAMGRAFTON, #TEAMBLANCH and #TEAMCORK as the compete in the following events: Keep Her Lit (team members will dash through the restaurant with a birthday cake with 20 lit candles. Whoever has the most candles lit at the end of the run wins!) Box Clever (team members will put together as many folded pizza boxes as they can in X time) Sit Up & Chill (team members must have a spoon of chilli after each sit up. Sounds easy? It ain’t!) What The Flip? (team members run through the restaurant with a burger on a spatula..like a Captain’s twist on the egg and spoon race!).

One finalist from every branch will be hitting Grafton St on 19th August for the Captain Americas Grand Final Olympic Games! There will be 5 heats. Sit Up & Chill, The Cosmo-nator (carrying a tray ladened with Cosmos through the restaurant at top speed!), Chips On Yer Shoulder (who can hold 2 bags of potatoes for the longest?), Game of Bones and Did You Want Fries With That? (a memory challenge involving the Captains’ memory)
The teams have been practising. They’ve been doing more trash talking than Conor McGregor.

Diners can get involved too, by joining the Game Of Bones: Captain Americas have coated their chicken wings with the spiciest chicken wings known to man for this game and are looking for brave participants willing to take the challenge. Tune in to the Barry Dunne Show on 98fm from the week starting 8th August to be in with a chance to take part.

Winners will get an overnight for 2 in The Clarence Hotel on October, dinner for 2 in Captains, a cocktail making class in Captains and tickets to see The Commitments in Bord Gais!

Just in case, here are the key dates: