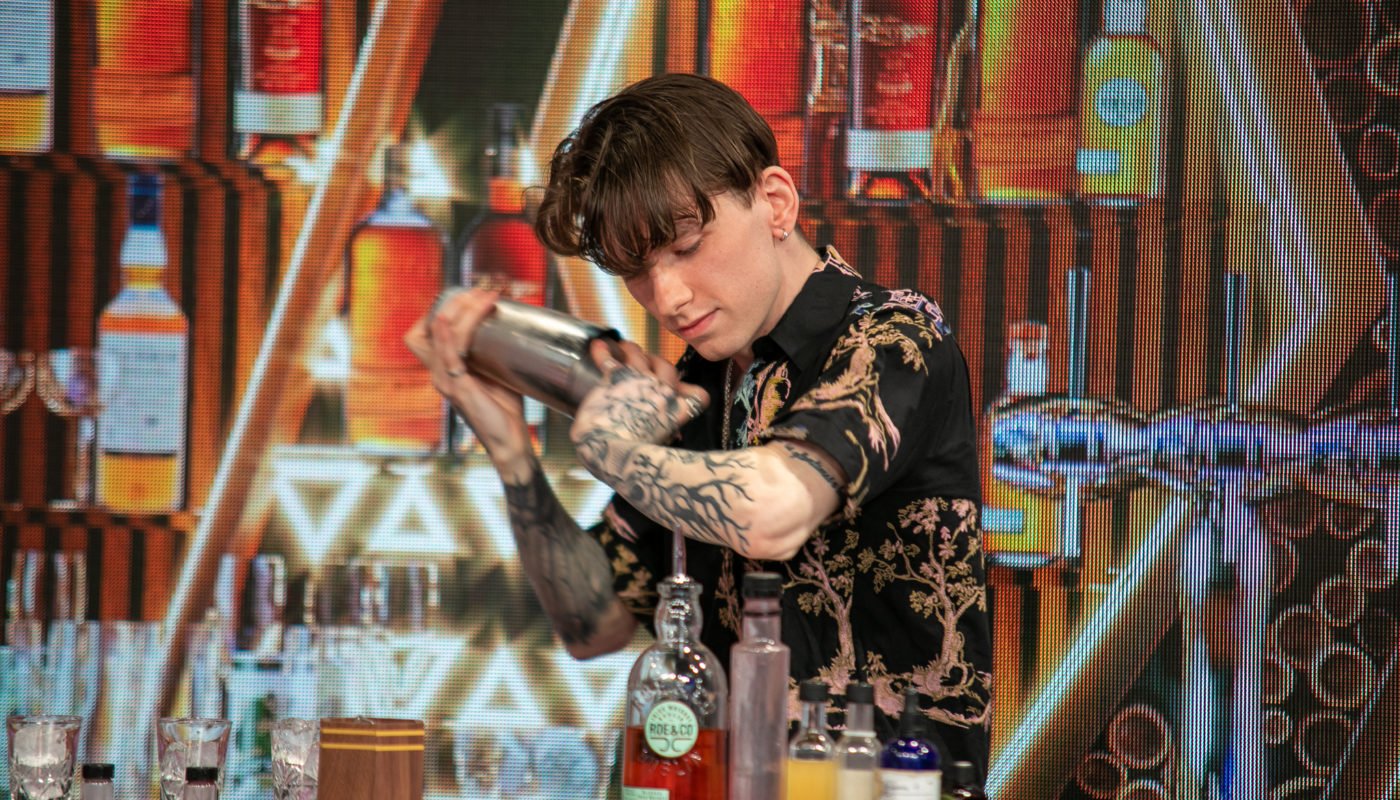 To be able to work in a job that gives you the freedom to explore and share your creativity is, unquestionably, a win-win. Seriously, who wouldn’t want that? For Cal Byrne, that particular question doesn’t need to be answered. The first Irish bartender to place in the Top 10 of the Diageo World Class competition, Cal is embedded in the cocktail and beverage industry to the point where he sees any potential changes and challenges as progressions instead of obstacles.

Following time at art college (where he studied fine art and sculpture), Cal opened his own bar, Pharmacia, in Limerick, and from there headed to Dublin’s Blind Pig Speakeasy. It was here that he spent two years with the goal, he says, “of being able to enter Diageo World Class, fully prepped and ready to go.”

That goal was achieved earlier this year when he was the first Irish bartender to place in the Top 10 of the Diageo World Class competition. It was, he recalls, one of those pinch-yourself moments. “I’ve been in the industry for a while, and I have worked alongside people who’ve entered the competition, so I obviously followed it quite closely. I was happy to get past the various stages, happy to just keep going, but, yeah, it was amazing to be able to do absolutely every challenge involved in World Class.”

How did he come up with the drink that won the Don Julio-inspired Subterranean Serve, and what combinations or permutations came through the process? This was a fun one, says Cal. “For quite some time, I’d already had in my head to work with traditional Irish techniques or ingredients that were a little bit less-known outside of Ireland. To most people, our culinary history starts with the introduction of the potato and goes on from there, but prior to that Ireland had a very interesting food and drink history because it was always so full of fresh produce.”

Having absorbed the Subterranean Serve guidelines, Cal intuitively reckoned that a subterranean process would make perfect sense. He has also been working closely with Beotanics, a company that provides the food and beverage industry with access to a sustainable supply of unique plant varieties high in nutritional values. “With the challenge being all about that,” says Cal, “I thought it was a great chance to be able to show the past and the present of Irish food and drink culture.”

With the past and present suitably taken care of, what about the future? Cal views his role of Group Beverage Manager with the Mercantile Group as being all about testing his creativity across its scope and variety of venues such as Café En Seine, Opium, NoLIta, and The George. He wants to “get out there and show my style, push what I had started to build throughout the World Class as my bartending process, and yes, hopefully create something unique along the way. I also want to step into bar development, innovation and consultancy, to generate passion in staff as well as customers, and create unique venues and experiences. There’s no better way to start than with a group that has such a scope of clientele and styles of venue.”

And what about future aspirations for the drinks and bartenders in the Mercantile Group? The word ‘unique’ springs immediately to Cal’s mind. “There is amazing quality in bars and skilled bartenders in Ireland,” he reasons, “but a lot of it tends to lean on external inspiration from classic American Speakeasy bars and bar trends in London. Although taking from those is important, to create something that is distinctly Irish and of Irish bartending culture would be amazing. And also, quite simply, to show things to young, new bartenders, of which there are a lot in the Mercantile Group. They have loads of passion and to be able to direct them into their future bartending careers is a brilliant and fun opportunity to have. My mum always said I’d be a great teacher, so I’m gonna put that to the test!”

Other aspects that will be put to the test are the differences customers should expect to see in the coming months, particularly in Cafe en Seine, Opium, and NoLita. Serious interconnections between venue concept, drinks concept and food offerings are key, says Cal. “For them to come in and feel like there’s a whole package.” Such an experience, he notes, is all in the details – or should that be the micro-details? “Somebody I worked with a long time ago said to me once that the most important details in a venue are the tiny ones, the things you almost can’t notice and recognise, but you know from them that the venue you’ve walked into is something special.”

It’s clear that Cal has the smarts and the intuition to bring next-level success to anything he touches in his line of work, but what underlines just how good he is at knowing the differences between a mixologist and a bartender. The former, he says, is a central facet of bartending (“understanding the combination of ingredients, your spirits, and what you’re trying to achieve by mixing them”). The latter is about creating an experience for a customer.

“Be they staff or customers, a lot of people very interested in cocktails will be able to tell you that they probably sat at the prettiest bar ever and were served a drink that was probably phenomenal. They might also tell you, however, that the bartender didn’t exactly treat them in the nicest way, and therefore the drink and everything else fell by the wayside. I really think that solely focusing on the drinks aspects misses out on the customer experience, which is massively important to me.”

Although not yet 30 years of age, Cal has significant knowledge and authority in and of the industry, and is fully aware that aspiring bartenders/mixologists will often nab him for advice. Well?

“Being humble is an exceptional asset to young bartenders, as it enables them to continue to learn. Don’t define your knowledge just by those around you but also by the global bartending scene. I felt that I became very well-connected with the global bartending scene, particularly over the past year, and I certainly made a lot of good friends through the World Class competition. And, of course, come and work with me in The Mercantile Group! I’m really excited about our training and development programme and about mentoring people as they compete in the various competitions over the next couple of years.”

Enough about advice, enough about mentoring, enough about bartending – what we really want to know is the answer to this question: when and where can we try a Cal Byrne cocktail?

“Oh, you have to keep an eye on social media for all the Mercantile venues! We’re on all the usual platforms, we’re getting things changed up, we’re meeting the team and making friends with everybody. So yeah, you’ve just got to pop into Café en Seine, NoLita and/or Opium. And don’t forget The George, as well, there’s lots of fun things to come. So, yeah, keep an eye on the socials, and we’ll see you very soon for something nice to drink!”