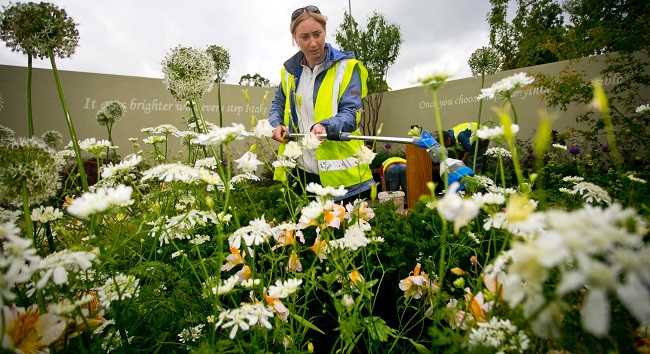 Currently in the final stages of preparing for its 11th year, Bord Bia’s Bloom 2017 festival will open on Thursday June 1st.

The festival, which is being held in Phoenix Park will run until June 5th and will consist of 22 show gardens; 13 postcard gardens; 50 floral and botanical art displays and 110 food and drink stands. There is no doubt that anyone attending Bloom will be praying for sun.

According to RTÉ Weather presenter, Audrey McGrath, “The weather is set to be quite changeable over the five days of the festival with a mixture of dry bright intervals and scattered showers. So, best to come prepared!” However, there is large sheltered areas allowing visitors to come and go safely in rain or shine. According to Bord Bia, since Bloom’s first festival it has doubled in size and today it is a 70 acre site. It will also have the largest marquee in Ireland which houses the floral features.

Andrew Wilson, an award winning UK garden designer and an international panel of judges will critique each garden before the official opening. The awards will then be announced on the morning of the event.

Bloom is open from 9am-6pm for the five days of the event. For more information visit www.bloominthepark.com.